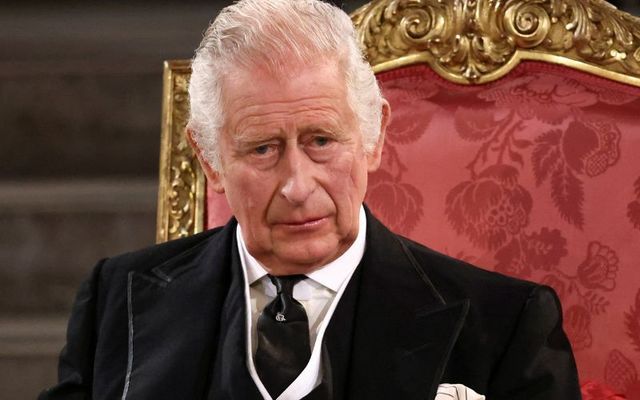 Britain's King Charles III looks on during the presentation of Addresses by both Houses of Parliament in Westminster Hall, inside the Palace of Westminster on September 12, 2022, in London. Getty

King Charles III, who became King last Thursday after the death of his mother Queen Elizabeth II, will also receive a message of condolence from the Speaker of the Northern Ireland Assembly, Alex Maskey.

A service of reflection on Queen Elizabeth II's life in Belfast on Tuesday will be attended by President Michael D Higgins and Taoiseach Micheál Martin.

The service will be one of several events and engagements during King Charles III's visit to Northern Ireland.

King Charles III will arrive in Belfast as part of a tour of the UK and will travel to Hillsborough Castle. His wife Camila, the Queen Consort, is expected to accompany him on the visit.

Two children from a local cross-community primary school will then present them with gifts. One of the children will gift them a tin featuring an image of the Giant's Causeway and containing chocolate truffles, while the other will present Camila with a small bunch of posy flowers picked at Hillsborough Castle.

The King and Queen Consort are also due to meet leaders of all major faiths in Northern Ireland before attending a service of prayer and reflection at St. Anne's Cathedral in Belfast.

King Charles's visit is expected to cause some traffic disruption around Belfast City Hall, with road closures in effect from Monday evening.

Members of the general public who wish to be at Hillsborough Castle during the Royal Visit can make use of a shuttle bus service departing from both Lisburn Train Station and the Eikon Centre between 7 and 10:30 a.m. BST.

A gun salute at Hillsborough Castle on Saturday marked the Principal Proclamation of King Charles III, while Robert Noel, the Norroy and Ulster King of Arms, read the Ascension Proclamation at the castle on Sunday in front of an audience of dignitaries and members of the general public.