Kerry Kennedy remembers Congressman and civil rights activist John Lewis as "really kind of a father figure in a lot of ways." 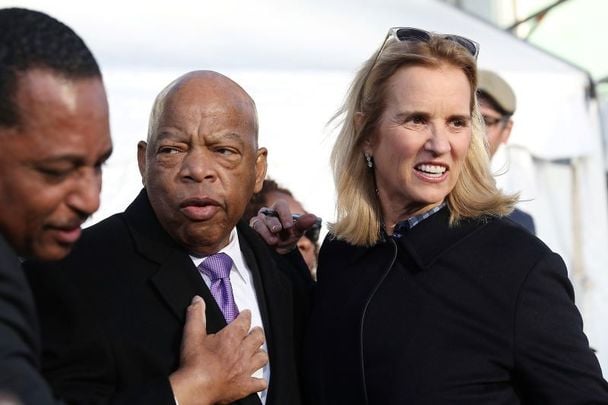 John Lewis (D-GA) and Kerry Kennedy attend a ceremony at Lorraine Motel, where Dr. King was murdered, on the 50th anniversary of his assassination, April 4, 2018 in Memphis, Tennessee. Getty Images

John Lewis, civil rights activist and Congressman, was laid to rest on July 27

Kerry Kennedy, the daughter of the late Senator Robert F. Kennedy, has expressed her sympathies on the passing of Congressman John Lewis and has shed light on the relationship her family shared with the civil rights activist.

Kennedy issued her comments via the Robert F. Kennedy Human Rights organization, of which she is president, and which John Lewis sat on the board until his death on July 17, 2020.

In her statement issued on July 20, Kerry Kennedy wrote: “John Lewis was the conscience of Congress, a civil rights icon, someone who reminded again and again and again what it means to be both compassionate and just. He was a moral compass for the nation and one of the last remaining unifying forces in American politics today.”

In 2012, along with my mother, Ethel Kennedy, and a busload of siblings, nieces and nephews, I boarded a bus from Montgomery, Alabama bound for Selma. @repjohnlewis stood at the front of the bus, microphone in hand, and told us his story. It's a moment I'll never forget. https://t.co/qSOQx1on6t pic.twitter.com/3k6zRUBh7i

Kennedy wrote that during the now-famous Montgomery to Selma Freedom Ride in May 1968, it was her uncle President John F. Kennedy and her father RFK who directed the National Guard to help disperse a white supremacist crowd who had descended upon the First Baptist Church where protesters had sought refuge.

Speaking about that historic event, Lewis said in 2012: "Without Bobby, I’m not sure I would be here today.”

After RFK met with students who had demonstrated as part of a campaign to desegregate Cambridge, Maryland in 1963, Lewis said RFK told him "the young people, the students, have educated me. John, you have educated me."

In 1968, RFK was set to speak at a rally in Indianapolis organized by Lewis and scheduled for the same day that Martin Luther King, Jr was assassinated. The city's mayor urged him to cancel. RFK refused, and "instead delivered one of the greatest speeches of the 20th century," says Kennedy.

“Afterwards," Kennedy writes, "Lewis said they returned to the local hotel and just cried.” The following day, Lewis went to Memphis to help arrange for King’s body to be returned to Atlanta. Then, Lewis arranged for RFK to meet with Coretta Scott King the night before King’s funeral.

Just over two months later, RFK was assassinated after delivering a speech at the Ambassador Hotel in California. Lewis, who was waiting upstairs at the hotel to meet with RFK, said he "cried the whole way home."

“I truly believe something died in all of us," Lewis later told Kennedy for her book "Ripples of Hope: Robert F. Kennedy," "I know something died in me. ...that’s why you have to keep going, moving on, and trying to inspire more young people to stand up, to get up.”

Kennedy wrote: “That’s what Lewis kept doing, every day, using his time on this earth to advance the causes of civil rights and social justice. He was unafraid to speak truth to power, be it by speaking frankly of the still-systemic racism pervasive in our country, by criticizing the Iraq War, of decisions of the current presidential administration, or by staging a firearm safety legislative sit-in in Congress.”

Speaking separately with The Guardian,  Kennedy said: “I think the value my father admired most after love was courage and there was no group that he admired more during the civil rights era than the Freedom Riders. He was awed by their courage and wanted to understand and John’s conversations with him were about getting to yes.

“They weren’t about anger slogans or the outrage that, of course, John totally deserved to feel. It was about how do we get the Voting Rights Act passed and how do we resolve this crisis in Maryland and how do we find a bus driver to bring the Freedom Riders from Birmingham to Montgomery and protect them along the way?”

“It’s very loving: more than a mentor, really kind of a father figure in a lot of ways. I asked him to do things all the time. He never said no, whatever march we were asking to him get in or whatever letter we wanted him to sign or piece of legislation we asked him to co-sign or event we asked him to show up for. It was a drumbeat of yes.”

She added that Lewis helped keep the memory of her beloved father alive: “The thing that he also did is he talked to me and my brothers and sisters and my children and my nieces and nephews about my father in a very personal way. There’s a lot of history so you understand the actions but it’s different to have somebody like John Lewis say this is what he was like, these are our conversations, this is how he treated me."

Kennedy told The Guardian: “I loved John. I’ll always miss him and so will my whole family. He means – he meant so much to all of us."

Read More: The day I was arrested with John Lewis

Related: Inspiring, The Kennedys, US Politics