The family of Noah Donhoe continues to look for answers following the 14-year-old's death in Belfast in June. 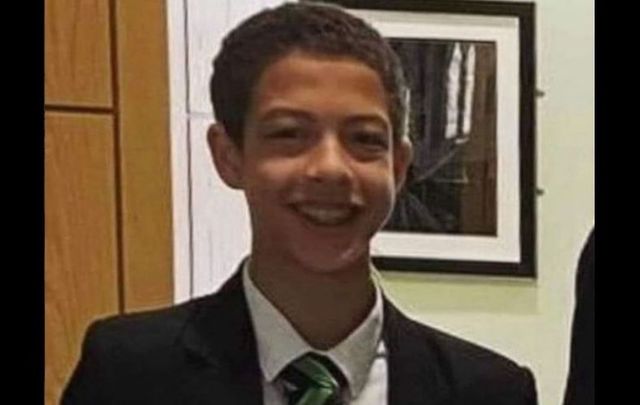 Noah Donohe's family have launched a campaign that seeks to get answers about the 14-year-old's death. PSNI South Belfast, Facebook

Noah Donohoe's family says the #JusticeForNoah campaign is "all about getting the answers."

Several sites across Northern Ireland lit up blue on Sunday, August 23 as part of the #JusticeForNoah campaign that is seeking answers as to what happened to Belfast teen Noah Donohoe before his death in June.

Titanic Belfast, Belfast City Hall, Enniskillen Castle, Newry Town Hall, and the Tinnies sculpture in Strabane, Co Tyrone were among the locations in Northern Ireland that were illuminated in blue light on Sunday, August 23, nine weeks since 14-year-old Noah Donohoe was last seen on June 21.

Following a massive six-day search, Donohoe's body was discovered in a storm drain on June 27. PSNI Superintendent Muir Clark said: "In my 30 years in the police, this is one of the most unusual missing person inquiries that I have dealt with."

It has since been announced that the Senior Coroner has opened an inquest into Noah’s death, and a hearing date has been set for January 2021.

Titanic Belfast Goes Blue For Noah 💙 Our building has gone blue this weekend ahead of joining with Belfast City Hall...

City Hall will be lit up in blue this evening for the #RememberMyNoah 💙 campaign. #BelfastLightsAtNight

On August 18, Sinn Féin councillor Steven Corr said in a statement that Belfast City Council would be lit up blue as per his request: “The death of Noah Donohoe shocked the citizens of our city and left many heartbroken, least not the family and friends of Noah.

“I welcome the cross-party support for my proposal to have Belfast City Hall illuminated blue this Sunday to mark nine weeks since young Noah Donohoe had gone missing.

“I hope that by illuminating the building, it will create awareness around the ongoing appeal for information on the death of Noah.

“Sinn Féin will continue to support Fiona Donohoe and the family in their search for the truth about the tragic death of Noah.

"I would appeal to anyone with any evidence or information in respect of Noah’s disappearance to bring this immediately to the PSNI, info@justicefornoah.co.uk, Fiona Donohoe’s Solicitor, Niall Murphy or Relatives for Justice."

On August 19, the Mayor of Derry City and Strabane District, Brian Tierney announced the Tinnies sculpture in Strabane and the Guildhall Clock would be lit up blue on August 22 and August 23  in remembrance of Noah and in support of his family's campaign to find out the full circumstances surrounding his death.

Tierney said: "By lighting the Tinnies up blue for 'Remembering Noah' this weekend in his mum Fiona's home town of Strabane we will show the family that we stand firmly with them in their quest for truth and raise awareness of their campaign."

The Tinnies in Strabane and the Guildhall clock in Derry will be lit up blue this weekend in support of the 'Remembering...

The campaign to light up sites across Northern Ireland in blue comes after Noah's family has launched a now-viral social media campaign entitled "MyNoah" that consists of a Twitter account, Facebook group, and Facebook page.

On August 21, Donohoe's grieving mother Fiona said in a video shared on the social media accounts: "My Noah is now like everybody's Noah and I will gratefully share everything about my Noah so that people can get to know him, because he was such an amazing boy.

"These social media accounts, I don't know much about social media, but it's a way for people to learn more about Noah, because they've taken him into their hearts.”

She added: “My god, he really gave everything to life and that's why I want people to give as much as they can until we get answers - it's all about getting the answers."

I have recently spoke at length about the #MyNoah campaign and what we hope to achieve together.

This extract is one of a number of segments that will be released over the coming days.#RememberMyNoah💙 pic.twitter.com/UAuKWGZzvT