A juror in the Derek Chauvin trial told CBS this week that Irish man Dr. Martin Tobin's testimony was the key to the ultimate guilty verdict. 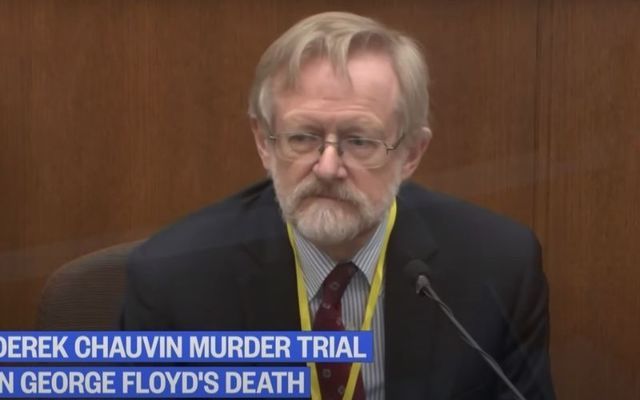 A juror in the Derek Chauvin trial has stated that Irish doctor Dr. Martin Tobin was the key witness in swaying the jury toward a guilty verdict for the Minneapolis cop last week.

Brandon Mitchell, juror number 52 during the trial, discussed the deliberation process on CBS This Morning on Wednesday and said that the case was "done" as soon as Tobin took the stand.

Mitchell said that Tobin spoke with clarity, breaking down complex scientific explanations into plain English that all witnesses could understand.

"I think Dr. Tobin was the biggest, the most influential witness out of everybody," Mitchell told This Morning.

"When Dr. Tobin came, with him speaking so scientifically but also making it understandable for everyone along with the exhibits that he came with, I thought he just broke it down in a manner that was easy for all the jurors to understand. And I didn't think there was any way for the defense to come back after that. I was like -- to me, the case was -- it was done at that point almost."

A juror from the #DerekChauvinTrial is breaking his silence with an inside look at what unfolded in the jury room.

Brandon Mitchell, juror #52, joins us to discuss the deliberation process and reaching a guilty verdict. pic.twitter.com/LNV0l4xNds

Tobin, a County Kilkenny-born pulmonologist and breath specialist who studied at University College Dublin, earned widespread praise for his testimony during the Derek Chauvin trial.

For instance, Mary Moriarty of the Chicago Public Defender's office said that Tobin was "probably the most effective witness" she has ever seen in her 30 years as a public defender.

Meanwhile, the Washington Post said that Dr. Tobin's testimony was among the "most damaging moments" for Chauvin's defense.

"In a moment widely viewed as one of the most damaging to Chauvin’s defense, Tobin pointed to several seconds of footage that he said showed Floyd’s exact moment of death. 'One second, he’s alive, and one second, he’s no longer,' the doctor said as he narrated a clip of a bystander’s video," the Washington Post wrote following the guilty verdict.

The New York Times additionally said that Tobin's testimony was one of the "key moments" in the trial, which ended last Tuesday in Chauvin's conviction on three murder charges.

"The prosecution has maintained that Mr. Floyd died from drugs in his system or carbon monoxide poisoning or heart arrhythmia, Tobin was brought back as a rebuttal witness and quickly demolished each of those theories," the Times wrote.

Tobin, who practices at Loyola University Hospital in Chicago, refused to take any payment for testifying at the trial.