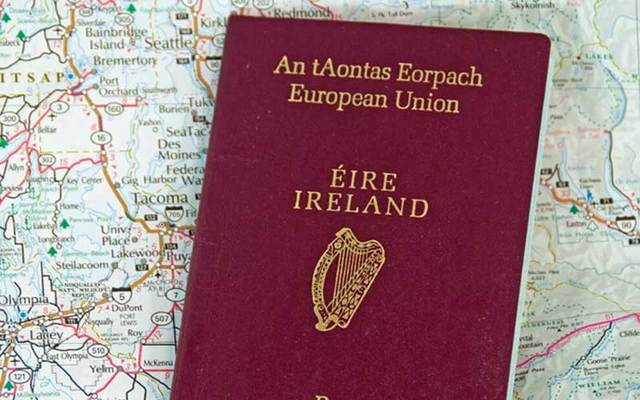 A leading British journalist is applying for Irish citizenship after Brexit. Getty Images

Cooney wrote: “From 11 p.m. on January 31st I have become technically, temporarily and territorially a non-citizen in Europe and the world.

“On Wednesday January 29, my British Passport expired and I decided not to renew it in protest against the United Kingdom’s withdrawal from the European Union, which I have been a life-long supporter since my teenage days at Holy Cross High in Hamilton, Scotland.

“I now intend to apply for Irish Citizenship through the Department of Foreign Affairs in Dublin.

“My grandfather, John Cooney was from Coalisland, County Tyrone, and my maternal grandmother was Sarah Skelton, from Milltown, Co Armagh. They emigrated to Scotland for work in the first decade of the twentieth century.”

Aged 72, Cooney will celebrate 50 years in journalism in June 1970 when, as a History graduate of Glasgow University and a qualified secondary school teacher of Jordanhill College of Education, he joined the Scottish Catholic Observer. After being awarded Glasgow University’s Sir Godfrey Collins Travelling Scholarship to study “The Churches and the Media in Western Europe”, he joined the Glasgow Herald in 1971 before moving to Dublin in autumn 1972 as Religious Affairs Correspondent of the Irish Times. From 1976 to 1982, he was European Correspondent of this newspaper based in Brussels, returning to Dublin in 1983 as News Focus Editor, and later holding other senior positions including Political Correspondent.

From 1990-92 he was Spokesman for Ray MacSharry, then European Commissioner for Agriculture, GATT and Rural Development, and later a script writer based in the EU’S Agriculture Directorate. In the course of his career, Cooney had spells with the Irish Press, the Irish Independent and Independent Network News, as well as founding and directing the General Humbert Summer School in County Mayo. His books include a biography of John Charles McQuaid, Ruler of Catholic Ireland and he is preparing a biography of Cardinal Tomas O Fiaich, Ireland’s Lost Peacemaker.

Cooney said that in the three-and-a half years since the Leave Campaign narrowly won the referendum on June 23, 2016, he was among the millions of British citizens who did not believe that a UK secession would actually happen.

“Yet, my friend from our Brussels days in the early 1990s, Boris Johnson, when he was European Correspondent of The Telegraph, now as Prime Minister, declares that a 43 per cent vote gives him  the democratic mandate  to leave the EU, yet the 45 per cent of people who voted for the SNP are told that Scotland cannot hold an independence  referendum.”

“The Scots, like the Irish are Europeans, not second class citizens of England”, Cooney added. “French President Charles de Gaulle got it right when he warned that les Anglais could not be trusted to transcend their chauvinistic insularity.”