On August 8, President Trump announced Joseph Maguire, the current head of the National Counterterrorism Center, to be the acting director of National Intelligence. 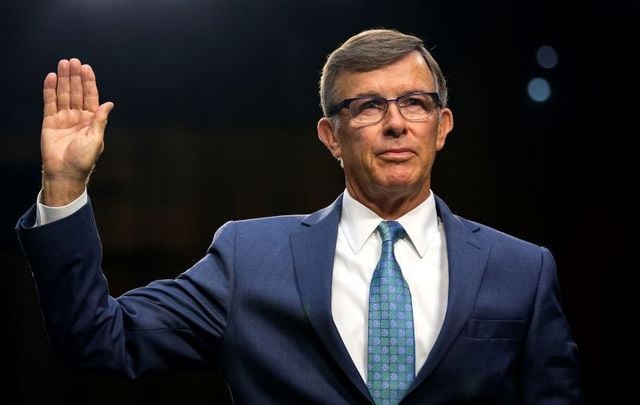 Irish American Joseph Maguire has been named as the acting director of National Intelligence, President Trump announced in a tweet on Thursday evening.

Read More: Is Trump our Ian Paisley, have the Troubles come to the United States?

On August 8, President Trump made the announcement in two tweets:

....career in the military, retiring from the U.S. Navy in 2010. He commanded at every level, including the Naval Special Warfare Command. He has also served as a National Security Fellow at Harvard University. I have no doubt he will do a great job!

Trump’s announcement of Maguire’s nomination came only about an hour after he revealed that Sue Gordon, the current deputy director of National Intelligence, had resigned:

....coincides with the retirement of Dan Coats. A new Acting Director of National Intelligence will be named shortly.

The New York Times reports: "A federal statute says that if the position of director of national intelligence becomes vacant, the deputy director — currently Ms. Gordon — shall serve as acting director."

However, as the New York Times reports, "Mr. Trump had decided not to allow her to rise to the role of acting director, according to people familiar with his plans."

....be leaving office on August 15th. I would like to thank Dan for his great service to our Country. The Acting Director will be named shortly.

However, on August 2, Trump slammed the "LameStream Media" for their "unfair" treatment of Ratcliffe, adding that Ratcliffe chose to remain in Congress:

....John has therefore decided to stay in Congress where he has done such an outstanding job representing the people of Texas, and our Country. I will be announcing my nomination for DNI shortly.

Though he did not tweet it, President Trump reportedly met bipartisan opposition when he announced Ratcliffe as a potential nominee.

NPR reported on August 8 that Gordon gave President Trump a handwritten note, allegedly referring to her displeasure about resigning: "I offer this letter as an act of respect & patriotism, not preference. You should have your team. Godspeed, Sue.”

Who is Joseph Maguire?

"Prior to his confirmation, Maguire served as president and CEO of the Special Operations Warrior Foundation, a non-profit organization that provides college scholarships and educational counseling to the surviving children of fallen special operations personnel, and immediate financial grants to severely combat-wounded and hospitalized special operations personnel and their families. Prior to leading the foundation, he was a vice president with Booz Allen Hamilton."

"Maguire retired from the United States Navy in 2010 as a vice admiral, culminating a 36-year career as a naval special warfare officer. He commanded at every level, including the Naval Special Warfare Command."

"He earned his bachelor’s degree from Manhattan College and master’s in Scientific and Technical Intelligence from the Naval Postgraduate School in Monterey, California. Maguire also served as a national security fellow at Harvard University."

Maguire is set to become acting director of National Intelligence on August 15.