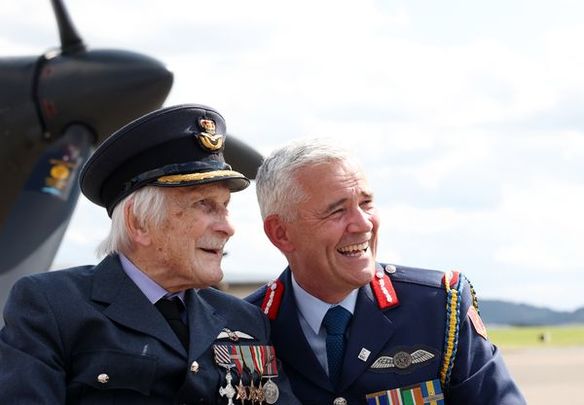 A 103-year-old veteran who flew for the Royal Air Force during World War II was honored at a special Veterans Day event.

The Irish Air Corps celebrated a special centenary Veterans Day on Friday. July 22, with a fly-past by RAF aircraft and the Air Corps over Dublin.

Group Captain (retired) John 'Paddy' Hemingway was also honored at the event, he is the last known Battle of France and Battle of Britain pilot.

They were escorted into and over Dublin city airspace by the Irish Air Corps aerobatic display team, the Silver Swallows.

The six aircraft then flew in formation over Dublin city and the River Liffey.

They landed at Baldonnel in west Dublin, where dozens of Irish Air Corps veterans and their families had gathered and Captain Hemingway was escorted out to see the planes and to meet the young pilots of today.

"The arrival of the aircraft serves as a reminder that the Irish Air Corps flew Hurricanes during the Emergency.

"I was also honored to host Group Captain Hemingway and be there when he was reunited with his WWII aircraft type.

"Today we are both proud Irishmen".

The Irish Air Corps celebrated a special centenary Veterans Day, with a fly past by RAF aircraft and the Irish Air Corps over Dublin. Group Captain John 'Paddy' Hemingway, a 103-year-old veteran who flew for the RAF during World War II, was honoured at the event. pic.twitter.com/p8cKso1aE1

Born in Dublin in 1919, John Hemingway joined the RAF in 1938 and, following the outbreak of the Second World War, was assigned to 85 Squadron in France.

He was credited with destroying a Heinkel He 111 bomber and a Dornier Do 17. Hemingway was awarded the Distinguished Flying Cross for bravery after he endured being shot down four times during World War II.

He continued to serve in the RAF after the war until he retired as a group captain in September 1969. Today, he is the last surviving Allied fighter pilot from the Battle of Britain.