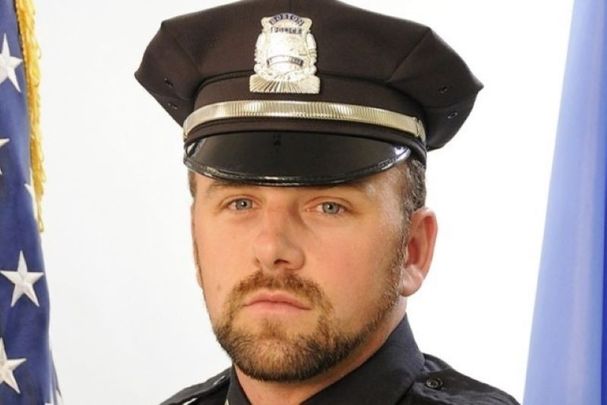 Irish American Boston Police Officer John O'Keefe was found dead on Fairview Road in Canton, Massachusetts on January 29. His girlfriend, who has pleaded not guilty, was charged with manslaughter. Boston Police Department.

Karen Read, the girlfriend of Boston Police Officer John O’Keefe who was found dead in Canton on January 29, has been released on bail after pleading not guilty to manslaughter.

Read, 41, pleaded not in Stoughton District Court on Wednesday to two felony charges, manslaughter and leaving the scene after causing personal injury or death, and one misdemeanor, motor vehicle homicide, The Boston Globe reports.

46-year-old O'Keefe, a 16 year veteran of the Boston Police Department, was found dead in the early hours of January 29 outside of a residence on Fairview Road in Canton, a suburb of Boston. At the time, a powerful winter storm was blanketing the area in more than 20 inches of snow.

In the wake of his death, O'Keefe is being remembered as a hero not only for his commendable policing career but also for having adopted his niece and nephew after his sister died of cancer and her husband died shortly after.

"John O'Keefe stepped up when others wouldn't or couldn't. He gave back more than he ever took," The Boston Police Department's Emerald Society, of which O'Keefe was a member, said in a statement.

On Wednesday in court, Judge Daniel W. O’Malley set bail at $50,000 for Read, who is an adjunct professor at Bentley University. Read's defense attorney David Yannetti argued for bail to be set at $5,000, but Judge O'Malley said Read “has plenty of reason to flee.”

Speaking outside the courthouse, Yannetti said: “I am disappointed in the rush to judgment against my client. I think that there was a lot of political pressure on this district attorney’s office to bring charges in that a police officer was a victim here.

“My client has no criminal intent. She loved this man. She is devastated. She is innocent, and that will come out at trial.”

The Boston Globe reports that in court on Wednesday, Norfolk Assistant District Attorney Adam Lally summarized the events that culminated in the discovery of O’Keefe on Fairview Road in Canton in the early hours of Saturday morning.

O’Keefe, who was not on duty at the time, and his friends had been at a bar drinking and were later joined by Read. The group then proceeded to another local bar where they stayed until closing time. Afterward, the group was invited to a friend’s part at Fairview Road in Canton.

Read drove herself and O’Keefe there, but Read left to go home, citing stomach issues. Prosecutors allege that after O'Keefe exited the vehicle, Read made a three-point turn to change direction, hit O'Keefe with her vehicle, and left.

Shortly before 5 am, Read became concerned that O’Keefe hadn’t returned home and wasn’t responding to calls or texts.

“When he did not respond, Read noticed a rear taillight on her car was broken,” The Boston Globe reports.

Read “became frantic” and contacted two friends to drive with her back to Fairview Road to search for O’Keefe.

Read spotted O’Keefe lying face up in a snowbank. He was unconscious; both of his were swollen shut and he was bleeding from the nose and mouth. Police were called shortly after 6 am.

CBS Boston reports that Read allegedly said, “Could I have hit him? Did I hit him?” as they tried to figure out what happened to O’Keefe. She also allegedly wondered if O'Keefe had been hit by a plow.

O'Keefe was transported to Good Samaritan Hospital where he was pronounced dead.

An autopsy was conducted on O’Keefe’s body on Monday and the cause of death was found to be skull fractures and hypothermia. Read was arrested and charged late on Tuesday, February 1. She is due back in court on March 1.