John Calhoun, whose father was born in County Donegal, was an ardent supporter of slavery and his stance contributed to the South's efforts to secede from the Union. 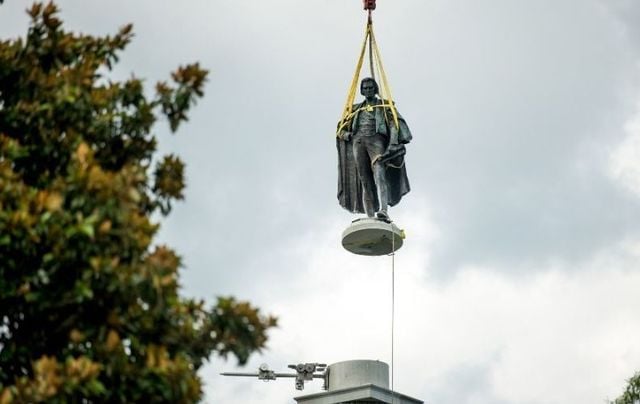 A controversial statue of John Calhoun, an Irish American and slavery advocate who served as Vice President of the United States during the 1800s, has been removed in Charleston, South Carolina.

John Calhoun, whose father Patrick was born in Co Donegal, was an ardent supporter of slavery and his stance contributed to the South's drive for secession from the Union which ultimately led to the US Civil War.

Crews worked throughout the day on Wednesday to remove the controversial statue after the Charleston City Council met via Zoom and unanimously voted to remove the statue on Tuesday evening.

Read More: Icons and regrets - should historic statues be destroyed?

During Tuesday's meeting, residents argued for and against the removal of Calhoun's statue in Marion Square.

Local resident Grace Clark pleaded with the council not to remove the statue. Clark's family has lived in South Carolina since the 18th century and she argued that the statue was part of the state's history.

"Not all history is good but it is our history," she said at the meeting. She argued that the city should add contextual information to the statue rather than pull it down.

An overwhelming amount of residents, however, spoke out against the statue and argued that it should be removed. Several event organizers additionally said recently that they would not use Marian Square again so long as the statue remains standing.

During the meeting, Mayor John Tecklenburg said: “The purpose of this resolution is not to disregard our past but to honor our lessons, not to erase our history, but to write a new chapter in history."

Councilmember Peter Shahid said: “The statue has served as a symbol of division in our community and we don’t need that. We need symbols that unite us that bring us together not tear us apart.”

Mayor Tecklenburg later said: "We have a sense of unity moving forward for racial conciliation and for unity in this city. God bless you all."

The statue was fully removed at around 5 pm EST on Wednesday night, prompting cheers from the watching crowd.

James C. Calhoun was known as a "cast-iron man" for his defense of slavery and white supremacy and owned about 80 slaves himself.

As a United States Senator, he gave speeches arguing that southern black slaves were better off than free black people in the north.

Calhoun served as Vice-President to both John Quincy Adams and Andrew Jackson and the Calhoun Doctrine partially led to the secession of the South before the Civil War.  Also known as the Nullification Doctrine, the Calhoun Doctrine argued that a state had the right to nullify or invalidate any federal law it deemed unconstitutional.

Calhoun also served as Secretary of State under President John Tyler and supported the annexation of Texas during the 1840s because he believed it would lead to an expansion of slavery and bestow more power onto slave owners.

Calhoun's support of slavery was unwavering and he argued that it was a "positive good" that benefitted both slavers and owners.