Joe Biden, who is maintaining a lead over President Donald Trump, said "we have to remain calm, patient, let the process work out as we count all the votes." 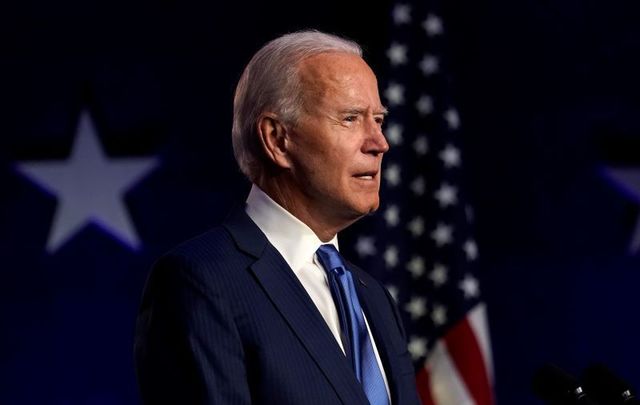 The next president of the United States has yet to be called at the time of publication on Friday night, but Joe Biden is holding a lead over incumbent President Donald Trump.

Former Vice President Biden delivered a live address at about 11 pm EST on Friday. His running mate, Senator Kamala Harris, who was wearing a mask, was also on the stage at the Chase Center in Wilmington, Delaware.

“We don’t have a final declaration of victory yet," Biden said opening his brief address, "but the numbers tell us a clear and convincing story. We’re going to win this race."

Biden said that after being behind in Georgia and Pennsylvania, he has since pulled ahead, and said that he will win both of those states. (Georgia is expected to go a recount, and counting continues in Pennsylvania.) He also noted that he is leading in Arizona and that his lead has doubled in Nevada.

“We’re on track for over 300 electoral college votes," Biden said. "And look at the national numbers - we’re going to win this race with a clear majority and a nation behind us. We’ve gotten over 74 million votes - let me repeat that, 74 million votes. That’s more than any presidential ticket has ever gotten in the history of the United States of America.”

Biden said that his vote total and his margin of 4 million votes over President Trump, who is calling for legal challenges in some states, is still growing.

Biden acknowledged that the process of counting the votes is “slow” and it “can be numbing” but reminded the public that the tallies represent the vote of each man and woman who exercised their “fundamental right” to have their voices heard.

Despite the election not officially being called yet, Biden said he and Senator Harris have already begun taking meetings with public health officials to address the ongoing coronavirus pandemic, which has seen record-breaking daily reports this week.

He continued: “Look we both know tensions are high, they can be high, after a tough election, the one like we’ve had.

"But we need to remember, we have to remain calm, patient, let the process work out as we count all the votes.”

“Democracy works,” Biden said, “your vote will be counted. I don’t care how hard people try to stop it, I will not let it happen.”

“We may be opponents, but we are not enemies. We are Americans.

“No matter who you voted for, I’m certain of one thing. The vast majority of the 150 million Americans who voted, they want to get the vitriol out of politics. We’re certainly not going to agree on a lot of issues, but at least we can agree to be civil with one another.

“We have to put the anger and the demonization behind us. It’s time we come together as a nation to heal.”

He added: “My responsibility as president will be to represent the whole nation. And I want you to know, I will work as hard for the people who voted against me as those who voted for me. That’s the job, that’s the job. It’s called the duty of care, for all Americans.”

“I hope to be talking to you tomorrow,” Biden concluded. “I want to thank you all. May god bless you and may god protect our troops.”

You can watch Biden’s address from Friday, November 6 here:

At the time of publication on Friday night, Biden, according to both Reuters and CNN, had secured 253 electoral votes. Reuters had Trump at 213 while CNN had him at 214.

The Associated Press, however, had Biden at 264, having called Arizona and its 11 electoral votes for him: 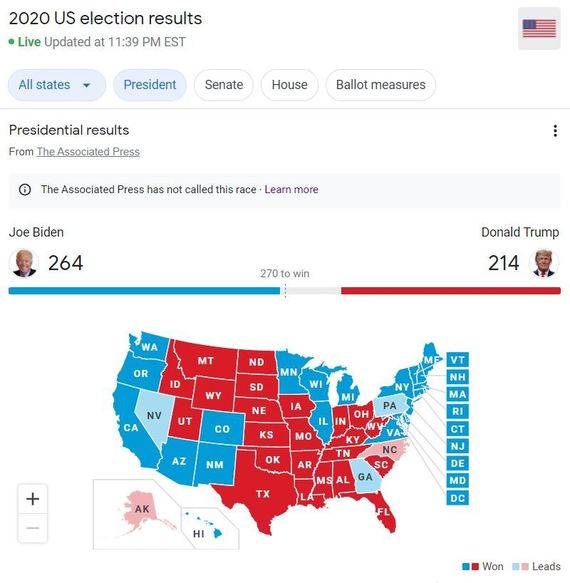 The Associated Press projection of the 2020 US Presidential Election as of 11:39 pm EST on November 6.

The first candidate to 270 votes, the majority of the 538 available electoral votes, will be elected as the next president of the United States.

Pennsylvania and its 20 electoral votes have yet to be officially called at the time of publication on Friday night. However, earlier in the day on Friday, as Biden passed Trump in the ongoing count in The Keystone State, Vox Media and Decision Desk HQ both called the election in Biden's favor.

Earlier in the day on Friday, the day after he delivered an explosive address from the White House alleging that he would still be winning if "illegal votes" weren't being counted, President Trump took to Twitter, complaining that his initial lead had shrunk and insinuating that it may return after "legal proceedings:"

I had such a big lead in all of these states late into election night, only to see the leads miraculously disappear as the days went by. Perhaps these leads will return as our legal proceedings move forward!

The Trump campaign has mounted legal challenges in several states, and is appealing to its supporters to donate to the "Election Defense Fund."