JFK’s inauguration shirt to be auctioned

The shirt President John F. Kennedy wore on his inauguration day, January 20, 1961, is to be auctioned today. 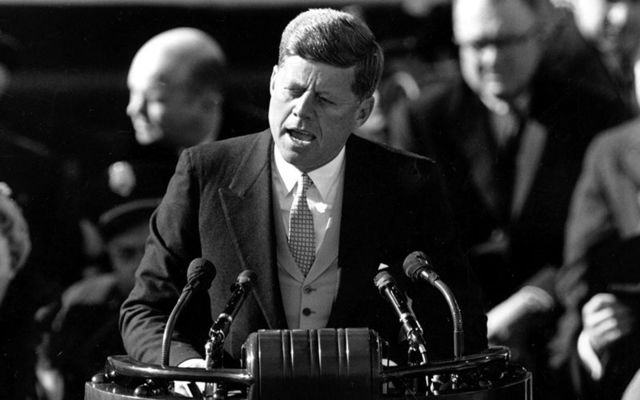 The shirt President John F. Kennedy wore on his inauguration day, January 20, 1961, is to be auctioned today.

“A fine and personal John F. Kennedy relic, a custom-tailored white linen collared shirt, bearing a fabric tag identifying the tailors as Morgan & Ball of London inside the collar, above the monogram “J. F. K.” in red thread. The inventory number “13293” is also sewn just beneath this monogram in red thread.

John F. Kennedy’s shirt, worn the day of his inauguration. (Via: www.alexautographs.com)

“The top two buttons are obscured by the edge of the placket, while the third button has been replaced. The shirt shows some soiling and has been mounted in a 44” x 41” black wood frame, along with a color photo of President John F. Kennedy, an original printed invitation to his January 20, 1961 inauguration, and a brass plaque indicating that the shirt was auctioned in Guernsey’s March 18-19, 1998 sale at the Seventh Regiment Armory in New York.

“This plaque also indicates that Kennedy wore this shirt on the day of his inauguration but had lost a button and given the shirt to his “valet”. Also present is a photocopy of a notarized statement, 1p. 4to., Cecil County, Maryland, March 5, 1998, signed by a Dorothy M. Butler and her daughter.

“This statement indicates that Butler’s husband, John Jacob Smith, was given the shirt as payment for a debt by U.S. Navy Chief Petty Officer Harvey B. Lease, Butler’s brother. Lease in turn received the shirt from his friend, incorrectly described in this statement as Kennedy’s manservant and named as “Bugsy”. This individual was almost certainly John “Muggsy” O’Leary, a former Boston policeman and Kennedy’s Secret Service bodyguard and chauffeur. A very evocative relic, appropriately representing the notably image-conscious Kennedy."

For more on the auction visit www.alexautographs.com.

Read more: On this day in 1963 JFK came to Ireland - What his historic trip meant