US Secretary of the Treasury firmly denied that Ireland was "cajoled" into the 15% OECD tax rate. 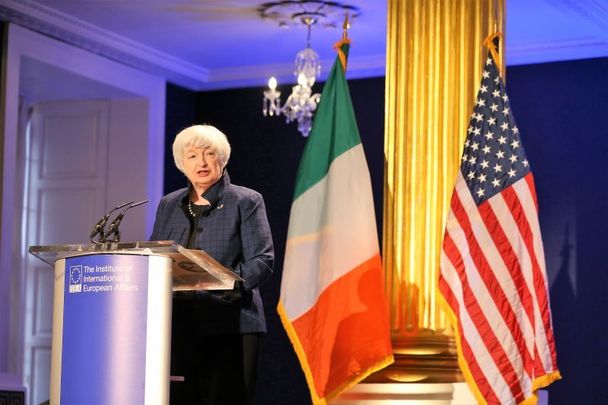 November 1, 2021: US Secretary of the Treasury Janet L. Yellen speaking at Dublin Castle ahead of a series of engagements with political and business leaders. RollingNews.ie

The duo's discussion centered on global tax and Yellen’s insistence that the U.S. didn’t “cajole” Ireland into abandoning its prized 12.5 percent rate for multi-national companies in favor of a 15 percent minimum Organisation for Economic Co-operation and Development (OECD) rate.

The 15 percent OECD deal, endorsed by G20 leaders in Rome last weekend, was high in the talks between Yellen and Donohoe.

Yellen firmly denied that Ireland, which had long defended its 12.5 percent corporate tax rate, had been pressured into signing up to the agreement. She said, “Well, I really personally wouldn’t use the word cajole.

“I think we’ve had very productive meetings in which we have tried to understand the viewpoint of Ireland about these tax negotiations and its needs in terms of being able to sign on to this.”

Ireland’s low-tax policy of the past 18 years attracted a wave of multinationals to the country, including Google and Facebook.

Speaking from the steps of government buildings, Yellen maintained Ireland’s low-tax rate was once important in attracting companies to Ireland.

However, she and Donohoe agreed that Ireland continued to have tremendous advantages as a country with an educated workforce and an excellent business environment. That would continue to serve Ireland’s economic interests.

Donohoe joined Yellen in insisting the OECD deal was not an “imposition.”

He said, “This is about the government making the choice that it is in our long-term economic interest that we’re in an agreement that stabilizes global tax policy and brings predictability to a topic that has been uncertain and volatile in recent years.”

Donohoe said he was “absolutely certain” Ireland would continue to be competitive and to attract jobs under the new rules.

Later on Monday, Yellen met executives from U.S. multinationals before addressing an event hosted by the Institute for International and European Affairs in Dublin Castle.

It was a great privilege to welcome @SecYellen to the Department today.

Ireland and the US continue to have a very close relationship with deep cultural and economic ties. pic.twitter.com/x61ls1trii