Woody Sez and Aran Islands lineup for the Irish Rep

The Irish Repertory Theatre continues to pull together rich strands of the Irish experience in America. 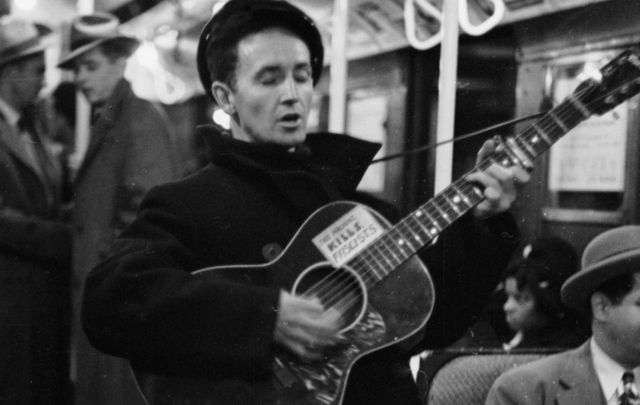 Woody Guthrie, whose life and music inspired a generation of Irish songwriters.

The Irish Repertory Theatre continues to pull together rich strands of the Irish experience in America. This month on their main stage they focus on the work of a singular American genius whose output inspired a generation of Irish musicians and songwriters like the Clancy Brothers and Christy Moore.

Woody Guthrie was born in Oklahoma in 1912 and lived the kind of freewheeling, American century life that seems as lost to time now as old Atlantis.

In "Woody Sez: The Life & Music of Woody Guthrie," the Rep will present a joyful, toe-tapping musical portrait of the man at the center of the folk revival of the 1950s, whose songs later inspired Bob Dylan and though him turned on a new generation.

Raised in a prosperous southern home with his two brothers and two sisters, Guthrie’s life might have been very different had it not been touched early on by inexplicable tragedies that haunted his footsteps and his outlook till his last day.

In childhood a kerosene lamp shattered in an accident that local town folk swore was anything but, with the flames consuming his beloved older sister Clara, who had nicknamed him Woodblock, just a few months before his seventh birthday.

Later another blaze engulfed the family home, sending the Guthries to live in a new house, the first of a series of moves that would result in the kind of rootlessness that characterized his adult life.

Like the young Bono, Guthrie didn’t seem to find what he was looking for. There were other unexplained fires in his early life, too. When he was 14 his mother Nora threw a kerosene lamp at her dozing husband Charley, searing him from neck to navel and ensuring that the members of Charley’s Masonic Lodge would agree to send her to the state asylum.

It must have sometimes looked as if an ill force or bad omen was trailing his family’s footsteps. Many years later, a short circuit in a radio set his daughter Cathy Ann’s bedding on fire ending her young life. Cathy Ann, who he doted on and who he had nicknamed Stackabones, was the inspiration of many of his famous songs for children.

It was fire too that brought his own career to an end.  Throwing gasoline on a Florida campfire one night it flared up and burned his right arm severely, leaving him unable to play the guitar that had made him famous.

His genius for social mobility (both figurative and literal) allowed him to see every America on the map, and many that were hidden from it, and he embraced them all in his songwriting. "Woody Sez: The Life & Music of Woody Guthrie" also finds time to recall that the man who evicted him from his New York apartment was Donald Trump’s father.  This land may belong to you and me, but Guthrie had no illusions about who would end up holding the door keys.

Downstairs at the W. Scott McLucas Studio Theatre second stage at the Rep, the new show "The Aran Islands" is an adaptation by Joe O’Byrne of playwright John Millington Synge’s classic work.

In 1898, at the command of poet W.B. Yeats, the dissolute Synge reluctantly exiled himself to the western islands to “express a life that has never found expression.’’

In that mythic, elemental landscape full of sea storms and sea legends, Synge found an antique world that was barely touched by Victorianism.  Here he would quickly write some of the greatest plays in Irish and world literature, including "Playboy of the Western World" and the utterly masterful Riders to the Sea.

Onstage Brendan Conroy, an Irish actor who can create worlds through a simple gesture or vocal inflection, successfully captures the riotous spirit of Synge and the elusive but utterly unforgettable island community on the west coast of Europe that was his subject.

Few people have understood and presented the dual nature of the Irish better than this singular Irish playwright, who delights in both the profane and sacred, and has a facility between that makes him so distinctly of Ireland.