Truss is a bust - The British have gone bonkers

There is nothing ordinary about British politics these days - Liz Truss will likely be forced to resign less than two months into her tenure as UK Prime Minister. 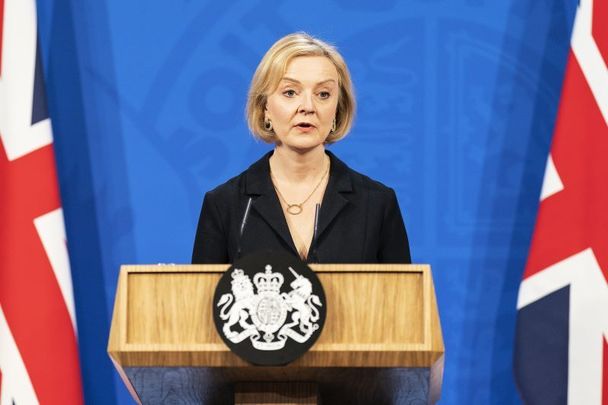 October 14, 2022: UK Prime Minister Liz Truss answers questions at a press conference in 10 Downing Street after sacking her former Chancellor, Kwasi Kwarteng in London, England. After just five weeks in the job, Prime Minister Liz Truss has sacked Chancellor of The Exchequer Kwasi Kwarteng after he delivered a mini-budget that plunged the UK economy into crisis. Getty Images

The extent of the British financial meltdown and its impact on that country has been grossly under-reported over here in the US.

The reasons for that are varied – war in Ukraine, upcoming midterms, and our own battle with inflation are all issues that have competed for attention.

The extent to which the British have gone bonkers has been ignored in comparison. Many Britons look fondly back on the Margaret Thatcher era. New Prime Minister Liz Truss herself portrayed Thatcher as her model.

It is well known Thatcher’s staff lived in sheer terror of her, one of the most dominant British leaders ever who didn’t suffer fools. How things have changed.

When asked his opinion of Truss, a senior official in 10 Downing Street made the following comment in the London Sunday Times, “Problem is, Truss is s*** at everything. Other than shut her in the cupboard, what can you do?”

What an extraordinary statement, reinforcing the fact that there is nothing ordinary about British politics these days. The notion of Truss in a cupboard held away from the adults is as absurd as it gets, more befitting a Monty Python gag.

The UK has had four prime ministers in six years and the odds are that the number will go up to five as Truss will likely be forced to resign in the fastest exit of a British prime minister since Earl James Aldergrove served about three weeks in 1756.

This kind of chaos and muddling we are witnessing in Britain is, frankly, more typical of a banana republic than the mother of parliaments.

The absurdities grow daily. Truss fired her chancellor of the Exchequer Kwasi Kwarteng who served for less than a month and in that time almost blew up the British economy. Last weekend it was confirmed his first budget underestimated the costs of introducing tax breaks for the rich by $60 billion.

We guess his much-touted thesis at Cambridge on the coinage crisis of 1695 in Britain which was widely given as an example of his genius did not come in so handy after all.

As The Guardian wrote, “Kwarteng’s political demise seems likely to go into political history as a tale of hubris: a minister so certain of his beliefs and impatient with others’ views that he made a series of avoidable errors, not least almost crashing the entire UK economy.”

Then there was the Mac the Knife moment when his boss, Truss, who had always described Kwarteng as among her very best friends even outside politics, stuck the shiv deep into his back and fired him as chancellor to save her own skin.

But how long can she last? The opinion polls are disastrous; her party is trailing Labour by 30 points or so.

The Tories can still count. Such a rating means the party would essentially be wiped out in an election.

The budget disaster was caused by seeking to drive home right-wing orthodox politics at a time when the British economy is gasping for breath. Tax cuts for the rich and cutting back government expenses just as inflation is surging, energy costs are cresting and mortgage rates are rising was a move worthy of Homer Simpson economics.

Truss has now appointed Jeremy Hunt, one of her fiercest critics, as chancellor. He has begun using orthodox methods to protect the economy. Many are calling him the de facto prime minister even though when 357 Tory MPs were voting for a leader, he got all of 18 votes.

Hopefully he will not be confined to the cupboard as his policies begin to bite. The trouble is, there is no way out for the suffering British people.

The Tories have a majority of 71 and two years to go before an election. God knows how many will be sharing the cupboard by then.

*This editorial first appeared in the October 19 edition of the weekly Irish Voice newspaper, sister publication to IrishCentral.