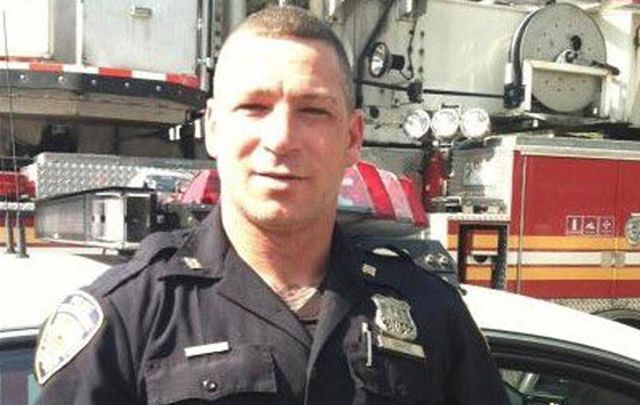 It's sad enough that New York City Police Officer Michael Hance died this month at the age of 44.  Hance gained comic notoriety a few years back when he was video-taped “twerking” at a gay pride parade.

A few months ago Hance was diagnosed with cancer, which was found to be related to the time he spent at Ground Zero working the bucket brigade following the 9/11 attacks.

At St. Martin of Tours Roman Catholic Church, in Long Island, Father Patrick Woods recalled Hance as a man who sent a “message that we are all brothers and sisters to one another, no matter our sexual preference, nationality, our color or creed.  We are brothers and sisters.”

It’s sad enough that we lost such an inspiring figure, yet another victim of the 9/11 attacks.  And yet, that very same week, the White House released a budget that makes it much more difficult for law enforcement to stop another potential terror attack. The president’s budget slashes $190 million of Homeland Security funding that New York City used for counter terrorism efforts.

“This funding is absolutely critical,” New York’s top cop, Irish American James O’Neill, was quoted as saying. “It is the backbone of our entire counter terrorism apparatus. It is the cornerstone of preparedness and prevention against terrorist threats, and enables us to do what we can do to keep the city secure.”

Isn’t this the president who bragged about how he was going to keep us safe from terrorists?  What?  Is he planning yet another travel ban -- third time’s a charm! -- that will be so total and complete that we will not have any terrorists left in America to investigate?

Other than, you know, the crazy people with all those guns.

Well, New Yorkers who voted for Trump, consider yourselves forgotten!

In many ways, yes, Trump is an unusual politician.  But in the case of slashing New York’s terror funds, Trump is behaving like a typical Republican good ol’ boy.

Many in the GOP know their loyalists reside in rural areas as well as the kinds of suburbs with little connection to larger cities.  And so, to be blunt, they don’t give a crap about cities.

Trump-supporting Irish Americans who live in and around America’s great cities better keep this in mind.

Meanwhile, Trump -- and many other Republicans -- love to offer plenty of verbal support for law enforcement.  It fits their macho, tough-on-crime, tough-on-terror postures.

And law enforcement certainly eats all of this up.  The nation’s largest police union, the Fraternal Order of Police, endorsed Trump for president.

On the one hand, this is understandable.  Policing is one of the toughest jobs there is, and Republicans have done a good job convincing cops that some Democrats are anti-cop because they support investigations into police brutality.

That’s a complex debate for another time.  What we do know is that when it comes to actually paying for law enforcement, it is Republicans who are anti-cop.

Can we actually be shocked Trump and his minions support slashing counter-terrorism funds for New York City?  Remember the Zadroga Act?  That was a bill designed to assist cops like Hance as well as other first responders who suffered health ailments as a result of 9/11.  Seems like the kind of thing any cop-lover would support.

But House Speaker Paul Ryan, the brains behind much of Trump’s bluster, as well as current vice president Mike Pence (then a member of the House) actually voted against the Zadroga Act in 2010.