Strabane and Derry City council even thinking of banning the Irish tricolor in its St. Patrick’s Day parades is one of the most bone-headed things... 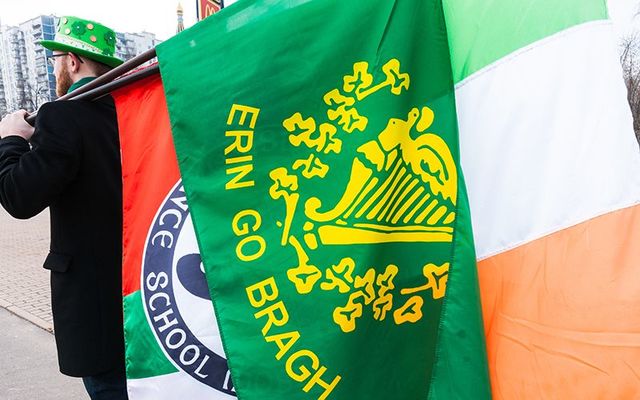 Strabane and Derry City council even thinking of banning the Irish tricolor in its St. Patrick’s Day parades is one of the most bone-headed things...

The decision by the Strabane and Derry City councils to ban the Irish Tricolor in its St. Patrick’s Day parades is one of the most bone-headed by far.

Fortunately, as we went to press, Strabane recognized its error and restored the right to march on St. Patrick’s Day with the Tricolor. Derry, however, is still a holdout.

Welcome the news from @dcsdcouncil that the irish national flag will not be banned from our Strabane St Patricks Day Parade. 😀 pic.twitter.com/snr2jXWrQy

The Tricolor should be banned from St. Patrick’s Day parades when the Union Jack is banned from Loyalist parades, especially on July 12 – in other words, never.

Flags and emblems are always controversial issues in Northern Ireland, but in this case the refusal to allow the Tricolor was one of the most stupid made in recent times.

Read more: The Irish flag was flown for the first time 170 years ago in Waterford

St. Patrick’s Day without the Tricolor resembles July 4th without the Stars and Stripes.  Along with the shamrock, the Tricolor symbolizes the day when 70 million Irish across the world celebrate their heritage.

The Tricolor is an inoffensive flag, green and orange with white in the middle to symbolize peace and the coming together of two communities.

LISTEN: "I think the decision by the council has put good relations back by 20 years in Strabane. There's some sort of impression that it's an illegal flag..." Cllr Paul Gallagher on @dcsdcouncil's decision to ban Irish flag during a St Patrick's paradehttps://t.co/M2U9Vb0mGn pic.twitter.com/BN6Gtdxcnk

The Tricolor has a proud history based on the French tricolor which flew during the French Revolution. An Irish American civil war hero, Thomas Meagher, who spent time in France, brought the Irish equivalent back to Ireland.

The Tricolor became the official flag of the Irish Republic in 1916.  Ever since then it has flown proudly outside the GPO in Dublin, site of the Easter Rising which gave Ireland its freedom.

Wherever you travel in the world, especially around St. Patrick’s Day, you will see this symbol of Irish heritage, proud, unfurled and free.

It represents far more than most national flags, coming to symbolize the revolution that shook the world in 1916.

While we are all in favor of celebrating St. Patrick’s Day as a joint carnival of joy and pride in Irish identity, both Catholic and Protestant, banning the Irish Tricolor goes very much against the grain.

There is nothing wrong with flying the Union Jack during St. Patrick’s Day, though it is highly unusual.  St. Patrick represents both religions in Ireland, and ruled at a time when Christianity reigned but the Catholic and Protestant religions had not separated.

The irony is that the flag of St. Patrick himself was blue, not green. That only came later for unknown reasons.

Down through the centuries St. Patrick’s Day has been celebrated by Irish Protestants in George Washington’s army who created the New York St. Patrick’s parade, and by Catholics all over the world.

To try and change that tradition and create a hostile symbol of the Tricolor is a grave mistake by the Northern Ireland county councils. One wonders what they were thinking, trying to neutralize the very essence of what has become a symbol of Irishness on Ireland’s most famous day.

Can you imagine the furor if the same people tried to ban the Union Jack on July 12?  There would rightfully be loud protests and anger on the unionist side.

Northern Ireland needs to grow up and lose its obsession with symbols. It needs to stand proud behind the shared identity of both British and Irish.

The fault for 50 years is that only one side’s symbols were acknowledged. Throughout The Troubles both flags were symbols of war, not peace.

But since The Troubles ended there is absolutely no need to make controversy out of either flag.

Do you believe that no matter where in the world an Irish person is they should be allowed to wave an Irish flag? Let us know your views below.