Why are we afraid of Senator Tom Cotton's opinion?

There was nothing surprising about Sen. Tom Cotton's "Send in the Troops" op-ed in The New York Times, so why the uproar? 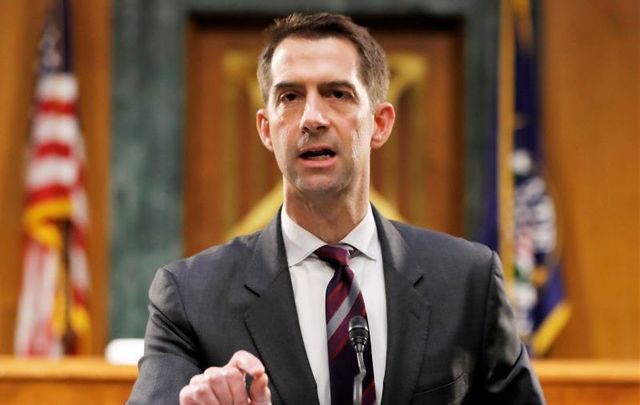 The publication of Senator Tom Cotton's op-ed in The New York Times on June 3 resulted in several staffing changes.

Tom Cotton, United States Senator from Arkansas, is as unlikable as they come, a fanatical supporter of hard-right Republican causes and closely aligned with the Trump White House.

He is exactly the kind of unquestioning water carrier this president wants, and Cotton, with an eye to 2024 and his own run for president, plays along.

We Irish have a particular reason to dislike Cotton after he became the one senator who would not allow a unanimous vote of the Senate to make a few thousand E-3 visas available to Irish citizens, visas that lay unused every year as the Australian quota of 10,000 was never reached.

But believe it or not, this editorial is written in defense of Cotton, who wrote a hateful op-ed in The New York Times last week calling for the U.S. military to be called in to stop the peaceful demonstrators making their voices heard about the murder of George Floyd.

We suspect most readers basically looked at Cotton’s opinion piece and shrugged. There was nothing surprising in his viewpoint, merely a continuation of the same hard right-wing line that the police can do no wrong and the protestors were basically all looters.

Cotton being Cotton was no surprise. But, The New York Times newsroom went ballistic, with several journalists enraged that the pro-Trump piece was printed.

Before you knew it, editorial page editor James Bennet resigned following a meeting with the paper's publisher A.G. Sulzberger, and Bennet's deputy, James Dao, had been reassigned.

For a paper like the Times that has always purported to be passionate about the First Amendment, it was an action that directly contradicted that stance. The proper response should have been, “If you don’t like it stop reading, but that's why we have a free press,” so that Cotton's abysmal viewpoint could be heard.

Meanwhile in Philadelphia, a similar witch hunt was chasing out the long-time editor of The Philadelphia Inquirer, Stan Wischnowski, for daring to use a headline that read “Buildings Matter, Too'' for a story outlining the danger that the architecture of many of Philly’s finest old buildings could suffer from looting.

Again in normal times, that would have been a one-and-done article on a potential angle that no one might have thought of.

Again, the hue and cry from the newsroom resulted in Wischnowski no longer being the man at the helm of the Inquirer, one of the country’s most distinguished newspapers.

We are going way too far with this cancel culture where every utterance and opinion a person has ever held can be used against him or her, and unpopular opinions are stifled.

We know the cancer from the right where lapdogs fret and await a pat from the president to push their biased and mostly fact-free screeds against the Democrats.

But they can justifiably now face down the Times and other papers on the left that crumbled at the first instance where someone writes an opinion editorial that gets the newsroom riled up.

The notion of the greatness of the American press and its valiant efforts to present the truth in the news without fear or favor is suddenly revealed as false.

Reason Magazine called the critics of Cotton’s piece “woke scolds” and noted, “Cotton's op-ed was poorly argued, constitutionally unsound, morally questionable, and factually flawed. But Cotton is not some random right-wing kook. The fact that he is a key policymaker of the Trump era might suggest that publishing his authoritarian dictates is a better course of action than keeping Times readers in the dark about them.”

Amen to that. The last place you would expect such turmoil is The New York Times, but effectively that is what we see.

Gleefully, the right-wing media has accepted the gift.  All in all, a bad week for American journalism.