The unfairness of Ireland’s housing crisis

It's about time Varadkar's "people who get up early in the morning" and pay for everything through their taxes get a break. 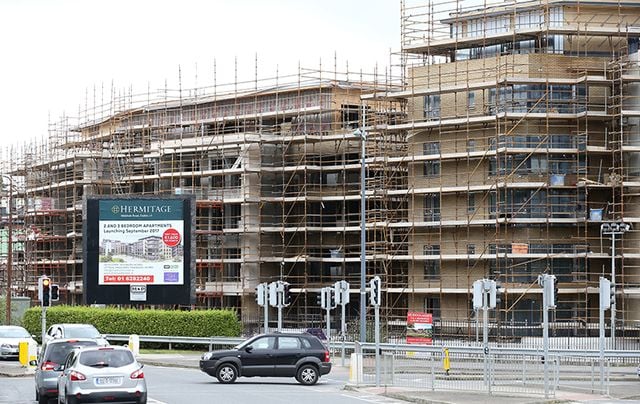 A housing development going up in Dublin earlier this month.

Here's a true story for budget week in Ireland.  A young couple I know recently moved into the first home they can call their own, courtesy of their parents who used their pension savings to buy the property. The arrangement is that instead of the young couple paying a landlord they will pay the parents a monthly rent and eventually will inherit the house when the parents pass away.

This young couple has two small kids and both of them work, one as a musician and the other as an art teacher.  Since they don't have full-time permanent jobs and are low earners, getting a mortgage was not possible.  Even if they had money for a deposit -- which they didn't -- music and art would not be high up their bank's list of preferred professions for loan candidates.

Up to this they had been losing close to half their income on rent.  They are paying a good deal less now and the arrangement gives them real hope for the future as well as a priceless feeling of security.  But they still have to work hard to pay the parents every month.

Their new home is in Marino, a 1930s garden estate of over 1,000 small houses on the north side of Dublin.   Being close to the city center it's a popular area for young couples buying a first home.  Prices in the area are still just about affordable for young high earners, although in the last year they have soared.

Neither the young couple nor their parents had any money left over when the house was bought early last year.  The home is habitable and has heating, but little has been done to it over the years. It needs modernization, a new bathroom, a kitchen extension and so on.   But all of that -- and new windows to replace the rusting original metal frame ones -- will have to wait.

So they cleaned and painted and moved in, and they're as happy as can be.  Five years or more from now they might be able to pay for all of the upgrading work that remains to be done.

Now here's where it gets interesting.  At the other end of the street there is another house exactly like theirs -- all the houses in the estate are the same -- which used to be home to an elderly couple.  Earlier this year that house was put up for sale and although other young couples were interested and made offers, the city council outbid them and bought it.

This is not all that unusual in Dublin these days.  Because of the critical shortage of social housing and the delays in building more, the councils have begun to buy some private houses as a fast way of providing social housing to people on the housing list.  This one cost the council around €350,000.

Nothing happened for a few months after the sale.  Then a large skip appeared on the road outside and a team of council workers arrived and began to strip the inside of the house back to the bare walls, removing internal doors, floors, etc. and putting in a new front door, new windows, a new heating system, new wiring, new kitchen, new bathroom, etc.  Even the beautiful original pine panel doors inside the house were thrown in the skip.

It is likely that the cost of the refurbishment works was at least €60,000 and may have been considerably more than that.  Some weeks later the new tenants arrived, a family who had been on the council housing list waiting for a home.  No doubt they are very happy and there is no reason to begrudge them their good fortune; they may have been on the social housing waiting list for years.

But there is a problem with this.  The rent the new tenants will pay to the council for their fully refurbished house will be calculated at council rates and related to family size and household income.  It is unlikely to be more than €100 a week and could be less than that, depending on family circumstances.

In contrast with this, the young couple I know are paying around €1,000 a month to their parents, their house has no modern improvements and, most important, they have not cost the state a cent.

It makes you think -- and it relates directly to the point made recently by the new Taoiseach Leo Varadkar about wanting to help all the people here who try to do things for themselves rather than be dependent on the state (and close to 90 percent of people here do provide their own housing).  This example also illustrates the way state intervention so often results in over-expenditure, often with mixed results.

Why must the house offered to social tenants be refurbished to the very highest standard before they move in?  Why can't they make do with old pine doors and rusty metal windows like the couple I know on the same street?   Is there some reason why they can't be asked to get out the scrubbing brushes and paint brushes and do some of the work themselves?

We all know we're in the middle of a housing crisis here.  But hard working young couples (or singles) who are trying to look after their own housing needs get very little help from anyone, including the state.  Meanwhile, some of those who want social housing from the state can be very picky, as the Sunday Independent paper reported last weekend.

It revealed that one in four people who are offered social housing in the Dublin City Council area have been turning down homes for a variety of reasons.  These include claims that the accommodation is not suitable, too far away from relatives, too big, too small, in an area they don't know, the decor is not to their liking, etc.

There are other aspects at play here as well.  The four councils in the greater Dublin area and many other councils around the country have high levels of rent arrears -- tenants who fall way behind in their payments -- and these funds are never collected.

This goes on despite some social tenants having significant household income (often in the black economy) and having a car or two outside the house.  And it goes on among those who can't find a job (despite us being down to six percent unemployment) even though their welfare payments are among the highest in Europe and their rents are set at very low levels.

We have explained in recent columns why housing here is such a mess and the problems being caused by soaring house prices and rents, something that will be solved over several years rather than by the measures announced in a single budget.  But some of what is going on in the housing market at the moment relates to the more fundamental points made recently by Varadkar.

He summarized what he wants to achieve in the Irish economy as "A Republic of Opportunity.”  He used the phrase several times in recent speeches, saying he wants to give everyone in Ireland -- particularly the squeezed middle class -- the opportunity to build a better life for themselves through hard work and self-reliance.

Varadkar said it's time "the people who get up early in the morning" got a break.   They are the people who pay for everything through their taxes, he said, but feel they get very little back from the state.  They were given a slight break in this week's budget but it's not much more than a token gesture because that's all the state can afford without cutting welfare and the rest of our inflated state spending.

Varadkar's belief that we need to stop encouraging our deeply engrained culture of dependency and foster one of self-reliance has been mildly controversial.   His slight shift to the center right has been criticized by politicians on the left -- the members of the Pay for Nothing parties as a colleague of mine calls them -- who want ever higher public spending on welfare and state supports and services.

It's been a long time here since the alternative pathways in economic policy have been put as bluntly as Varadkar has done in recent weeks.  And that's one reason why there has been a sharper interest in this week's budget.

There are some small signs in the budget of a change in economic approach and some minor recognition of the need to reward "the people who get up early in the morning." You can read the full details of this week's budget elsewhere and see if you think this shift in the direction of economic policy goes far enough.

Does it give enough reward to the squeezed middle who don't want to live off the state and prefer to do things for themselves?  Does it do enough to lessen our culture of dependence?  We will return to the subject here next week with a full analysis of the budget details.