Leo Varadkar makes it clear the government "does not believe in a culture of dependency and victim hood" but how will they heal Ireland's crisis? 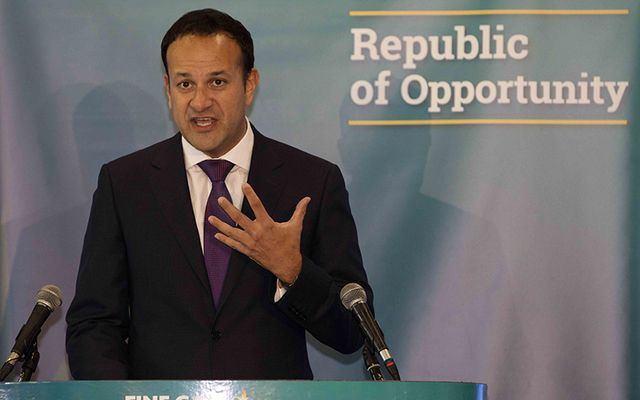 Leo Varadkar speaking under the Fine Gael sign, which reads the Republic of Opportunity. RollingNews

Richard Boyd Barrett, one of the small group of radical left members of the Dail, last week introduced a bill aimed at giving everyone in Ireland a constitutional right to a home.

It's the kind of virtue signaling that looks good in the middle of our housing crisis but actually means very little.  Unsurprisingly, none of the big parties supported it and it was defeated.

Instead there was general agreement that the idea could be discussed at a Dail committee at some stage.  The reality is, however, that running a referendum to insert a right to a home in the Constitution won't solve our housing crisis.

If passed, it might make everyone feel as virtuous as Boyd Barrett believes himself to be.  But it won't miraculously produce overnight the thousands of new homes that we need, both private housing and social housing.

In fact it could make things even worse if it encouraged more people to start demanding free social housing from the state rather than working hard to fund their own housing needs.  (Private housing, either owned or rented, is the way the vast majority of people in Ireland get a roof over their heads.)   It could also mess up council housing waiting lists if individuals started taking court actions to enforce a new constitutional right to a home, leading to queue jumping and chaos.

The bottom line is that a constitutional right to a home would not do anything to help local councils build all the new social housing that is needed, never mind private housing.  For that we need money and construction workers, both of which are limited in supply.  And we need time, several years at least, to gear construction up again.

Even so, the idea does have superficial appeal.  As Boyd Barrett pointed out, many countries around the world have a right to housing in their constitutions.  But most of the same countries also have a homelessness problem.

It's a bit like all those "rights" -- to a home, food, water, medical care, education, etc. -- enshrined in the UN Declaration on Human Rights. Looking around the world today we can see that so many people do not have these things, even though their representatives sit in the UN in their expensive suits.   It's easy to create "rights" on paper; it's far more difficult to deliver them on the ground.

Giving everyone a constitutional right to a home sounds good.  But it is based on the misguided notion that the state has a duty as well as the ability to provide a home for anyone who asks for one.

It feeds into the extraordinary sense of entitlement that has grown up here recently, one result of the major increases in state welfare benefits and supports of all kinds which have been introduced in the last few decades, mainly by Fianna Fail as they bought elections.

This entitlement culture has encouraged a mindset which regards the state as having a duty to provide everything and that only fools struggle to provide for themselves.  And this applies to housing as much as other requirements.

Most people would accept that the state does have a duty to keep people off the streets, which it is doing here by providing emergency accommodation in hotel rooms, hostels for rough sleepers, etc.  In fact various laws passed by the Dail (including the 1988 Housing Act) require the state and local councils to do this.

We have around 8,000 people in emergency accommodation (out of a population of close to five million) but only a few hundred rough sleepers (many of whom have addiction and mental problems).

So even though we have a crisis because no new homes were built here for years after the crash, the state is doing what it can to cope despite the constraints it faces.  To suggest otherwise is simply inaccurate.

It will take us at least five or six years to catch up. There is no magic solution, and certainly inserting a "right to a home" into the Constitution is not the answer.

There are worrying aspects to our entitlement culture, particularly in relation to housing.  The media here likes to run emotive stores about a mother and children found sleeping in a car, or a single mother with two or three kids living in the restrictive confines of an "emergency" hotel room for a year or more.

These stories tug at the heartstrings and are good for circulation and on-line clicks.  And they do reveal situations that are very difficult for those involved, particularly the children.

But this kind of reporting never pursues obvious questions, like where the father(s) of the children is and whether he is contributing, or why the woman had a second or third child even though homeless.

A significant proportion of those in emergency accommodation are young single mothers.  Their expectation and demand is that the state must house them simply because they have children.

This is not new.  Even before the crisis some young women, particularly in certain areas in our cities, knew that the way to get on and then up the social housing list was to have a child and then more children.

There are other aspects to this as well.  In Dublin, for example, between 30 and 40 percent of first offers of housing by the councils are rejected because people don't like where the home is, or they say it's too far away from the kids' school or too far from their relatives etc.

One of the four homeless people who died in a single week recently, which caused a media storm here, had refused a home offered by the council because she felt the area was unsuitable for her kids and the door of the empty house had been vandalized.  But the house was in a major suburb of Dublin and thousands of families live in the area.

The point is that all these cases are different and have varying issues. There is a real crisis because of the lack of available homes and soaring rents.

But adding to these difficulties is the well-established underlying sense of absolute entitlement to a home provided by the state, even if those involved do nothing to help themselves or plan their lives.

The culture of entitlement is much wider than the housing issue, of course, and permeates many areas of life here.  Welfare benefits, child payments, rental supplements and so on are all far higher here than they are in the U.S., the U.K. or in most European countries.  And they have been maintained at these levels even though the state almost went bankrupt after the crash.

Paying for this means that we have very high rates of tax here (around 50 percent) which kick in on anything above a relatively modest income (around €38,000).  Speaking to the annual meeting of IBEC (the Irish organization of business people) here last week, Taoiseach Leo Varadkar referred to this, pointing out that in France (still a left leaning country) you have to earn €150,000 before you hit the top rate of tax.

It's a real problem here, with so many middle-income hard-working people (the people "who get up early in the morning" as Varadkar has called them) who are stretched to breaking point paying their bills and high taxes.  What really frustrates them is seeing the way other people who don't work benefit from this and keep on demanding more.

“We believe that work should pay and we want everyone, including those on middle incomes, to gain from the system they fund through their taxes,” Varadkar said. “Too many people feel that they pay for everything but get little in return.”

He made it clear that he wants to use the limited fiscal space that will be available in the budget in two weeks to give a small break to these people.  He left out a few lines from his prepared speech which said that the government “does not believe in a culture of dependency and victim hood, where people are down and dependent. Rather we believe in offering people a way up and a way forward.”

Maybe he felt that the media would pick on this, particularly since he was addressing a well-heeled audience of 700 top business leaders, so he left it out.  But it's a clear indication of his thinking.

He did say in his speech that he believed in fostering a “culture of aspiration” in what he calls a republic of opportunity.  “This government believes in hope and aspiration, a better life as something to aspire to, and something to rise up to,” Varadkar said.

Changing our deeply engrained culture of state dependence and entitlement to one of work and self-reliance is going to be extremely difficult.  But with unemployment now down to just over six percent, this is as good a time as any to try.  And Varadkar seems to be a politician of conviction who will not give up easily.

Given time, the culture he wants to introduce will do more than anything else to solve the housing crisis. Even so, it's going to take several years to make a noticeable dent in the problem.