"There will be no storm called after Patrick in the foreseeable future because, largely, of the continuing influence over us of our former British rulers." 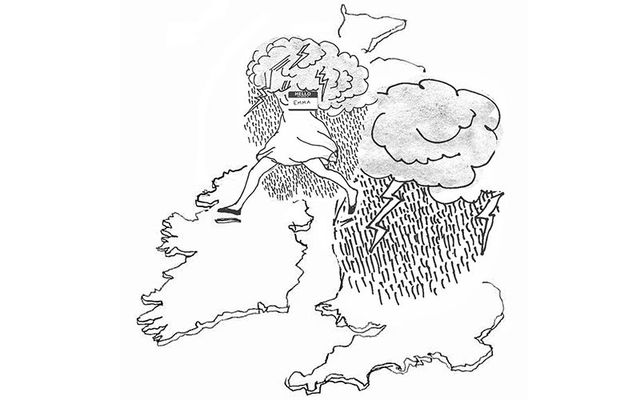 There'll be no storm called Patrick! Not in Ireland. Caty Barholomew

"There will be no storm called after Patrick in the foreseeable future because, largely, of the continuing influence over us of our former British rulers."

Before I start to boast somewhat sadly about securing a world scoop relating to our patron saint, can I sincerely wish all of you, wherever you are, a serenely proud and happy St. Patrick’s Day.

Savor and relish every second of the day during which, quite deservedly, we punch way above our weight on the global stage. Slainte to each and every one of you.  That comes from the heart and soul of an old hack.

Slainte indeed on our special national day of celebration. Slainte, slainte, slainte. And look after each other when the craic soars late in the early morning when the rest of the world is asleep and jealous within about our capacity to so heartily enjoy ourselves.

For all IrishCentral's weather news visit

I come to my world scoop from that vantage point.  I was researching a yarn last week for all my outlets in the media and did a little research when wondering why all the storms which have created such havoc across the poor Emerald Isle in recent decades have been feminine classes of storms bearing names like dreadful Debbie of the past, Ophelia last month, Emma this month, from which we are still slowly recovering here, and Georgina, the first of the witch-bitches back in the end of January.

I was suggesting that storms with male names, as was initially suggested when the naming of incoming storms was formalized between British and Irish weathermen (and women) would likely, because of some alchemy beyond my simple ken, be more gentle and less damaging.

Dammit, what did I not discover in my research. I discovered that the Irish weathermen (and women) when the naming system was being established, with alternating gender names for the storms, wanted to call the first male storm Patrick after our beloved national saint. And bloody John Bull responded the way John Bull has always responded to Irish wishes.

I unearthed a chain of emails between the two groups which included a snide British response to the Irish request that Patrick was too much an old Irish cliché, was it not? They did not agree to naming any future storm after Patrick, our favorite Welshman, and probably our Irish officials did not argue the case strongly enough because it did not happen and will not happen to our eternal shame.

So the witch-bitch of a storm and blizzard which is costing us millions right up to St. Patrick’s Day was called Emma.

Read more: The Beast of the East has hit but Ireland is still cracking jokes

In the Brexit era in Europe, with all the political and social and economic realities currently so hazy, there is an ironic side to the naming of the terrible storm called Emma. I learn that neither we Irish nor the British could change the storm’s official name because she came from mainland Europe across the British Channel and had already been given her name by the European weathermen before she struck the British Isles.

Accordingly -- equally ironically -- she was a European immigrant of a lady somehow representative of the waves of European immigrants into Britain whose presence added the critical weight to the Brexit vote in said British Isles.  Ironic indeed.

Anyway, there will be no storm called after Patrick in the foreseeable future because, largely, of the continuing influence over us of our former British rulers. That, for sure, is somewhat sobering but also the truth. Maybe it is also heartening that whatever later storms attack us this spring bear English names like Elizabeth or Victoria rather than Patrick or Mick or John Joe. God forgive me for this, but I am also not too troubled by the fact that John Bull suffered more hardships from Storm Emma than we did and the half of the country is still crippled and heavily stricken as I write.

The era of the Black and Tans is still strong in the folklore here more than a century after our proud Tricolor first fluttered in the winds of (near) total freedom. We have long memories.

On a lighter note to conclude, I was informed just an hour ago that there is a firm in Munster now producing little ceramic cottages with chimneys which emit the genuine aroma of the peat fires which trigger so many childhood memories of the old Ireland for all of us. I gather that burning a sod of turf or peat, as you call it, is important out in the diaspora, especially at funeral ceremonies.

I hope none of you need these little evocative chimneys in the near future but promise to provide contact details after St. Patrick’s Day and the associated celebrations.

In the meantime, with great national pride and joy, enjoy it all. God Bless ye.