Sinn Fein is one good Irish election result from having a real shot at power. 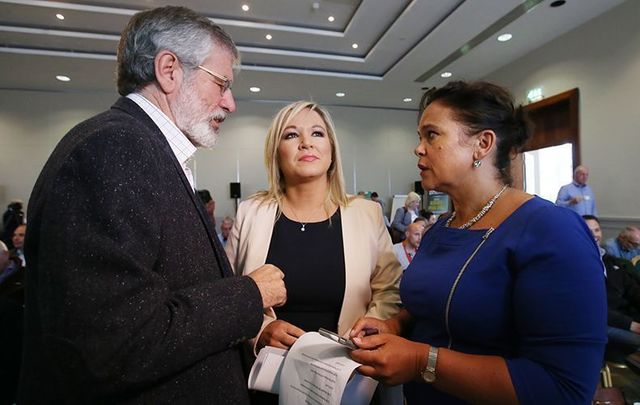 Sinn Fein made a dramatic move last weekend setting up the faces of the future at the party’s annual convention.

Sinn Fein is one good Irish election result from having a real shot at power in a race that will likely see the party as the third largest in the state after the next contest.

The decision by party leader Gerry Adams to step down was a deliberate move to hand over the reins to a younger leader at a critical time.  The move is a major gamble, but not for the reasons most might expect.

Conventional wisdom is that Adams and his IRA connections to the past were hurting progress for the party in the Irish Republic.

The other point of view could just as well prevail that his popularity among nationalist Irish, along with that of the late Martin McGuinness, was the reason the party has had a whirlwind rise to power in the north and on the cusp of it in the south.

Without Adams and McGuinness, could Sinn Fein become like the SDLP after that party’s two giants, John Hume and Seamus Mallon, stepped down? Successive SDLP leaderships have foundered since without their two pillars.

Losing Adams and McGuinness means that the two most vastly experienced Sinn Fein leaders have passed on the torch.

It also means that the long war they fought begins to fade even more into the background, and the idol-like reputations they enjoyed and deserved does not automatically flow on.

The cresting if the Sinn Fein wave in the north and now in the south was done with probably the two best politicians in the island in charge.

No matter how good Michelle O’Neill and the obvious Adams successor in the south Mary Lou McDonald are -- they still have gargantuan shoes to fill.

Both are highly capable, but their political opponents will know that testing then early and defining them on negative terms will be a major priority, and opportunity.

Sinn Fein’s biggest problem remains women in the middle class, especially in the Republic, and McDonald seems uniquely qualified to handle that issue. But it will take a major effort to bring the Republic’s middle class into the Sinn Fein fold.

Gerry Adams has clearly established, almost from nothing, a rural and a working class coalition which has brought the party a long way. Sinn Fein was helped in that effort by the near collapse of Fianna Fail and a financial crisis that heavily favored outsider political parties at the polls.

Whether Sinn Fein can make the leap into the middle classes remains to be seen, but the Adams coalition of the rural and working class must also hold.

So while the Sinn Fein decks are cleared for new leaders and new directions, there is no certainty that this strategy will succeed. The departure of Adams removes the most tactically astute politician on the island of Ireland.

It will be up to his successors to push the momentum forward.  That will be no easy task.