Opposition parties, especially Sinn Féin, were jubilant after defeats for the ruling Fine Gael party in all four constituency by-elections in the Republic. 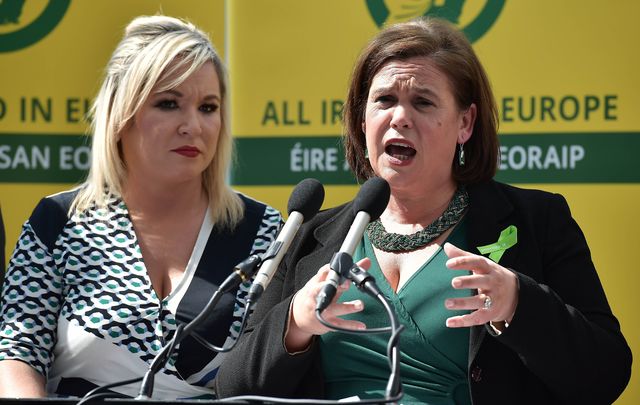 Opposition parties, especially Sinn Féin, were jubilant after defeats for the ruling Fine Gael party in all four constituency by-elections in the Republic.

The Fine Gael defeats were followed by a government defense of its housing policies when a debate on a no-confidence motion in Housing Minister Eoghan Murphy opened on Tuesday.

The minister described the no-confidence motion from the tiny Social Democrats party as opportunistic, reckless and a stunt.  With Fianna Fáil abstaining, the government expected to get enough support from independents to win the debate and avoid a snap general election which many Irish politicians wish to avoid because of Brexit uncertainty which continues to loom over a British general election later this month.

"It's a really good day for us... The #GreenWave is continuing to build."@eamonryan reacts to yesterday's by-election results. An historic win for @joefingalgreen, and a growing Green vote proven by strong showings from @thekavofficial, @oliver_moran and @karindubsky. ?? pic.twitter.com/VhydGVzvf3

Meanwhile, Sinn Féin and the Greens were ecstatic over their victories in the two Dublin constituencies in the fray.

Mark Ward, a 44-year-old behavioral therapist, upset pre-election predictions when he topped the poll to win Dublin Mid-West with a margin of 525 votes ahead of second-placed Fine Gael’s Emer Higgins.  They were competing for a seat formerly held by Fine Gael’s Frances Fitzgerald before she moved to the European Parliament.

Sinn Féin leader Mary Lou McDonald described the victory as a good day for working-class people and showed her party is “turning the ship” after poor performances in the presidential, local and European elections.

McDonald said she was delighted to have the dilemma of figuring how to hold two seats under the complicated proportional representation voting system in a general election.

The Green Party won its first-ever Dáil by-election as Joe O’Brien was a comfortable victor in Dublin Fingal.

Following his victory, O’Brien said, “We had the so-called green wave in the summer at the local elections, but it’s gaining traction now and I think it’s more than a wave. I think there’s a bit of a sea change in terms of how people are deciding where to put their votes.”

Martin said he still believed the natural time for winding down the current Dáil was in late April.  He said he thinks the Brexit issue needs to be sorted before Ireland has a general election.

Taoiseach Leo Varadkar’s expectations were low going into the by-elections count as Irish governments rarely win by-elections.  But the lack of even a single success puts his Fine Gael party in line for a tough re-election campaign in 2020, expected to be around the end of April.

Read more: What's behind Ireland House, Tokyo and our growing footprint in Japan?