Through the outcome of elections held earlier this month by the New York City St. Patrick’s Day board of directors was at first unclear, sources close to the parade confirm that Sean Lane will serve as vice chairman. 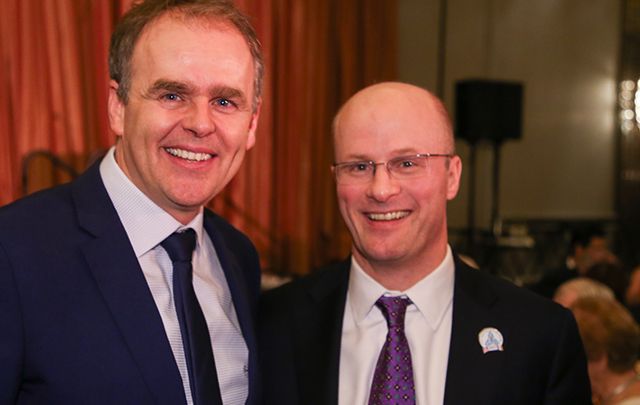 Through the outcome of elections held earlier this month by the New York City St. Patrick’s Day board of directors was at first unclear, sources close to the parade confirm that Sean Lane will serve as vice chairman.

His opponent in the contest, Brendan Lynch, has accepted the result after board members who voted by proxy expressed their support for Lane, sources close to the parade told the Irish Voice.

“I am very grateful for the chance to serve as vice chairman of the greatest parade in the world and look forward to helping to make it even better,” Lane, born in New York and raised in Co. Galway, told the Irish Voice.

Lane, senior vice president at a major financial institution in New York, and Lynch, an associate principal with Bard, Rao + Athanas Consulting Engineers in New York, were the two candidates for the position of vice chairman formerly held by John Fitzsimons who passed last year.

At the meeting on June 7, Lane received five votes from the board members present, while Lynch’s total was seven. Three proxies for missing board members were not voted because they contained the names of board chairman John Lahey and chief financial officer Frank McGreal, and their preference for vice chairman differed – Lahey was in favor of Lane, and McGreal for Lynch. After the meeting Lahey contacted the board members who held the proxies – Denis Kelleher, Timothy Rooney and Jean Husted – and they expressed a wish to cast their votes for Lane, thus bringing the count to his favor.

Lynch, a long-time volunteer with the St. Patrick’s Day parades in both New York and Eastchester – both he and Lane were elected to the New York board of directors earlier this year – was angered by the result when the proxy votes were cast in Lane’s favor, and sent a letter to board members and the parade’s affiliated organizations which criticized Lahey for how he managed the meeting and the vote process.

However, Lynch will not contest the result any further and continues to serve on the parade board which will next year elect a new chairman as Lahey again confirmed at the meeting that he will step down after next year’s march.

Tommy Smyth, who co-hosts the parade broadcast on NBC and is a former grand marshal, was elected as president of the parade board at the meeting. The board plans on convening again after July 4, either by phone or in person.

Lane is the co-founder of the St. Patrick’s Day Foundation, NYC, which provides funding for the parade and its scholarship program through its annual gala every March 16, and a golf outing in the autumn. In March, he became an honorary member of the Fighting 69th for his fundraising efforts on behalf of the regiment. He is also a member of the board of the Galway University Foundation and the Abbey Theatre in Dublin, and is a member of the leadership circle for Northwell Health’s Department of Medicine