Scandal of how US vulture funds stripped Irish property bare

Sale of a huge portfolio of Nama property raises doubts about the way Ireland is being sold off at knockdown prices. 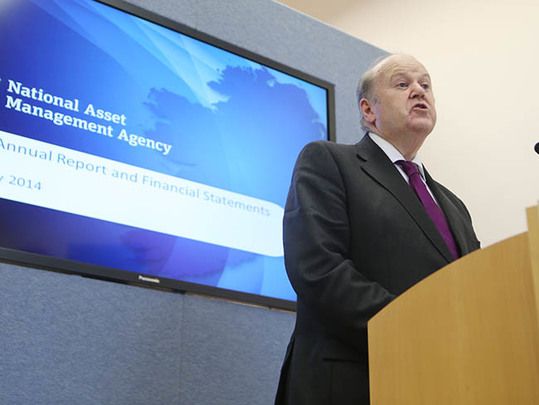 Revelations last week about the sale of a huge portfolio of Nama property, mainly in Northern Ireland, have again raised doubts about the way Ireland is being sold off at knockdown prices to international investors.

Nama – the National Asset Management Agency – is the state body which was set up here in 2009 after the crash to take bad property loans out of the Irish banks and enable them to function again. Nama bought the loans from the banks at a heavy discount, and the idea was it would hold on to the property assets behind the loans until prices recovered, perhaps for ten years or more. At the time it was suggested that the state might even make a profit from this in the end.

The loans involved were originally worth tens of billions, taken out by developers who went bust in the crash and could not pay them back. After the crash the underlying property assets had plummeted in value, and Nama applied an average discount of over 50 percent when buying the loans from the banks.

After 10 years or so it was hoped that the property market would have recovered and Nama would eventually sell the assets. It all sounded fine in theory. In practice it has not worked out so well.

The problem is that in the last two years or so many of these loan portfolios have been put on the market by Nama and snapped up by major international investment funds – mainly American funds – at knockdown prices. Many of the properties involved have then been resold within a year or two at double what was paid for them. The American funds have made a killing, ultimately at the expense of the Irish taxpayer.

That's the background. What happened last week was the emergence of very disturbing revelations about one of these Nama portfolios comprised of property loans taken out from Irish banks by 55 developers in Northern Ireland.

The loans were secured on more than 850 properties, mainly in the North but also in Britain and in the south of Ireland. The original value of these loans was €5.7 billion.

Nama bought the loans at a steep discount, paying the banks just over €2 billion for them. It ended up bundling all the loans into what it called the Eagle portfolio, and it sold them as a single lot for €1.6 billion to the American investment fund Cerberus last year.

After professional fees, the amount that Nama realized on the original €5.7 billion in loans was actually €1.4 billion. The shortfall, as we all know, has been swallowed by the Irish taxpayer, via the bailout the Irish state got to survive.

That itself is scandalous enough, but there were also very dubious aspects to what happened in relation specifically to this sale. We do not have space to go into the full details of this here and you can find it easily on Irish media sites.

But in brief what happened was as follows: The row began two weeks ago when an independent deputy in the Dail (Parliament), Mick Wallace, made the startling claim that £7 million which had been lodged in an Isle of Man bank was a payoff in relation to Nama's Northern Ireland portfolio sale. He claimed that this money was earmarked for a Northern Ireland politician or party.

Various politicians in the North quickly denied that the money was for them. A Belfast law firm called Tughans, which had acted for Cerberus, said it was a fee due to them and that it had been diverted offshore by their former managing director Ian Coulter, who left the firm in January. Why that was done, if it was a simple fee for the law firm and not money to be passed on elsewhere, is so far unexplained.

Nama's top people were called before the Dail's Public Accounts Committee last week to explain what was going on. They said they knew nothing about the £7 million, but what they did reveal made the picture even more murky.

The Eagle portfolio had been put on the open market by Nama in December 2013, and at one time there had been up to nine potential bidders for the portfolio. Eventually this was narrowed down to two or three major funds, most notably the two heavyweight American funds Pimco and Cerberus.

Expressions of interest in the portfolio had come on their behalf via a New York law firm called Brown Rudnick, which had contacted the then Northern Ireland Finance Minister Sammy Wilson about it. He contacted the Irish Minister for Finance Michael Noonan, who replied that any interested funds should deal directly with Nama.

Nama said last week that Pimco, the lead bidder, subsequently revealed to Nama in March 2014 that it had agreed to pay a £15 million success fee to be divided three ways between the New York and Belfast law firms and a former Nama Northern Ireland advisory committee member Frank Cushnahan, a well known business man in the North.

When this was revealed Nama demanded that Pimco withdraw from the bidding, although Pimco now claims that it took the decision to withdraw itself after internal consideration. With Pimco out of the game, the two law firms then quickly moved on to work on the bid by Cerberus.

Nama continued to deal with the two law firms despite their involvement in the Pimco success fee offer. And the following month, April, Cerberus was announced as the successful bidder.

Last week members of the Dail's Public Accounts Committee said that this whole business stinks and various investigations are now underway. Nama insists that everything was above board and that it got the best result for the Irish taxpayer in what was still a depressed property market in the North.

But there are all kinds of unanswered questions about this. Nama was set up as an independent body so that it would not be subject to political influence.

So why were various politicians getting in on the act in relation to this sale? Why was Sammy Wilson contacting Michael Noonan about it? Why was Dan Quayle meeting Peter Robinson about it?

And above all, why were £15 million in "success fees" being offered by Pimco, and was it not likely that the Cerberus £7 million was also somehow aimed at making their bid successful?

This case has put a long overdue spotlight on Nama, which up to April this year was protected from media inquiries under the Freedom of Information Act here. The result is that we know very little about the deals that Nama has been doing over the past few years, even though they involve billions of euros, all money that belongs to the taxpayer.

The suspicion is that Nama has been told by the government to get its business done as fast as possible and certainly well ahead of its original target wrap-up date of 2020. The government wants to be able to claim this Nama success as another milestone in moving us on from the crash.

But it is coming at a huge price. There have been numerous shock stories in the media about powerful American funds that have bought up property here and then resold it within a year or two for a huge profit. And at the end of the day, it is the Irish taxpayer who is carrying the cost of all this.

Nama has predicted that it will end its work by showing a profit – but it is important to remember that this "profit" will be in relation to what Nama paid the banks for the bad property loans, which usually involved a discount of between 50 and 60 percent on the original loans. The difference was made up by the recapitalization of the banks by the Irish state which of course is now being paid for by taxpayers in bailout interest and repayments.

In addition to that – and the Northern Ireland portfolio is an example – it now seems that Nama is more focused on getting quick sales of its property portfolios rather than holding on to them for long enough to maximize value. The discounted price it paid the banks for the Northern loans was €2.1 billion. But it only ended up with €1.4 billion after fees when the deal with Cerberus was completed.

So even at that level – and remember, the original value of the loans was €5.7 billion – this is hardly a stellar performance, particularly since the property market here is now in a strong recovery.

The big time winners in this process are the big investment funds, mostly American, which have been making billions of bucks at our expense.

There are dozens of examples of this I could give, but I will mention just two. A six-story office building on the corner of Mount Street in Dublin 2, the block that houses the Gas Board's headquarters, was sold by Nama to the U.S. fund Northwood Investors in 2012 for €27 million. Last year, Northwood sold the property on again for €42 million, or €15 million more than it had paid just two years earlier.

Last August, the Forum Building in Dublin's financial district was sold on by U.S. private equity firm Atlas Capital for €37.8 million. The price represented a near €10 million premium on the sum Atlas had paid Nama just two years earlier when it bought the building for €28 million.

These are individual examples but there are much bigger examples where entire portfolios were bought and sold. An example on this scale is the Holly portfolio of loans on around 40 commercial buildings sold by Nama in January last year for around €220 million to American fund Lone Star, which sold on the portfolio in March this year – one year later – to another U.S. fund, Starwood Properties, for €350 million.

The government should have put up a big sign at Dublin Airport saying “Ireland on Sale, Knockdown Prices.”