Cork-born, flame haired Irish singer, brings acclaimed solo show One: The Songs of U2 to Manhattan. 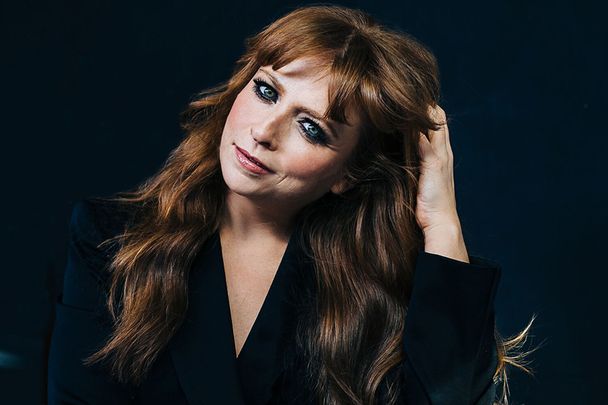 This month concert singer and recording artist Maxine Linehan will bring her acclaimed Bono-centric solo show One: The Songs of U2 for a limited run to the city’s premier nightclub, Feinstein’s/54 Below in Manhattan. Think rock and roll meets Broadway in an unmissable treat for the band’s legions of U.S. fans. Cahir O'Doherty talks to the singer about what U2’s unforgettable music means to her and to the Broadway community where she’s making her name.

Cork-born, flame haired Irish singer Maxine Linehan has already made a name for herself in Manhattan, the toughest nut to crack in show business.

But this month the singer who was recently hailed by The New York Times as “fiercely talented” will return with a showstopper, her acclaimed U2 concert One: The Songs of U2 which will run for two headline performances on September 15 and October 13.

Speaking to the Irish Voice this week, Linehan says she knows what she’s getting into. “I grew up in Ireland where U2 is a big deal all of the time. But I didn’t really connect with their music until I started singing it. And here we are now with a full show,” said.

Linehan’s show first got its start back in 2015 as a fundraiser for Broadway Cares/Equity Fights AIDS initiative, when Linehan asked a group of Broadway belters to pick their favorite U2 song.

“It was so well received by the audience,” Linehan says. “What it pointed out to me is that not only are these the biggest rock songs of all time, they also have great lyrics that singers want to sing. I say this all the time, Bono doesn’t write fluff. Every word of every song has meaning and that’s what singers want to do. They want to deliver this message to the audience.”

Now Linehan will stand alone onstage in her solo show (backed by an orchestra) to remind us why these world-famous songs became classics in the first place.

“It’s important that people understand that I’m not trying to be the artist that I’m interpreting. That’s a little more obvious with U2,” she says.

“For me it’s important to stay true to the music, because these songs are sacred to many people. I’m putting my emotions and my experiences into these words.”

The best example of how Linehan approaches U2’s work is through her performance of the onetime Live Aid showstopper “Bad” in the show.

The song was written about the INXS front man Michael Hutchence who struggled on and off with addiction until his untimely death in 1997. It’s a lifelong struggle that hits home for the talented Irish singer.

“I have a brother who has battled his whole life with addiction,” she confesses. “I learned how to sing ‘Bad’ because it came from my own life, what I had gone through as someone who has loved another human being so deeply, watching them battle with addiction and trying to free themselves of this illness. So I’m trying to bring my voice to the songs without changing the songs. It’s a fine line we have to walk.”

Expect surprises, though. Linehan’s musical director has brought cellos and a violin to the rock arena, and you will are certain to hear instruments you don’t normally hear in a rock song.

Meanwhile, for all of the Irish love of song it’s a wonder that we don’t have much of a tradition in Ireland of writing musicals.  There have been a few over the years, but in the main they’re rare as hen’s teeth.

Why does Linehan think we don’t have a tradition of musical theater, in a country where song is otherwise so central? “Well, here’s a quite from my late father,” she says. “He would watch me performing in musicals in Ireland, where I had my first at the Cork Opera house when I was 17.

“I remember him saying to me after a show once (it was The Sound of Music), ‘I just don’t understand it, how you all of a sudden start singing?’”

As an Irishman it didn’t make sense to him to wear your heart on your sleeve so openly in public, where you would be asking to be lampooned.

“We do normally wear our hearts on our sleeves in many ways, yet for my dad for any us to break into song out of nowhere in the middle of the street was bizarre. He said, ‘You were talking and talking and then all of a sudden you started singing? What?’”

It’s something that needs to change, this bashfulness, Linehan thinks. “We are such a musical nation. It’s everywhere in Ireland. I mean I’m from Cork where talking is singing, you know?”

Translating U2 from rock stage to Great White Way has been as fascinating as it sounds, Linehan says.

“In history Broadway songs were meant to be not serious and most of the time comedic. So to be able to sing these big powerful profound lyrics for songs like ‘Sunday Bloody Sunday’ is just so unusual. That’s a big part of this show.”

On its face, why Linehan’s show is so different is that U2 isn’t a Broadway show.  They’re a rock band; they have a sound that is famous.

But One: The Songs of U2 has taken away most of that stadium sound, and instead the show shines a light on the lyrics. You will hear the songs like you have never before.

Even diehard U2 fans, who live in their admiration of the band like monks in their faith, have found the experience revelatory. One super fan came up to Linehan after a recent concert and said, “I can’t believe he wrote a line about ‘tuna fleets clearing the sea out’ in that song. I’ve never made that line out before.”

People hear the songs in a different way when a trained singer focuses on what they are. “For me as a singer that’s where I live. I want to take you to this place where you will experience what I’m feeling through the songs,” she says.

One of the hardest things about planning the show was selecting the songs of course, because there are so many that are so beloved.

“In the end I picked the ones I can connect to deeply. When I recorded ‘One’ as a single, that had a huge response (40,000 YouTube views) and showed me I was on the right track.”

Linehan wants to remind audiences of just how different the musical styles of U2 have been since the days of their album War.

“’Angel of Harlem’ is a gorgeous bluesy song,” she says. “We also include a lot of The Joshua Tree because how could you not? But there is also ‘City of Blinding Lights’ and one of my favorite songs to sing, because it reminds me of my father and I always dedicate it to him, is ‘Sometimes You Can’t Make it On Your Own.’”

One thing Linehan hasn’t included is the band’s own Broadway tunes. “It’s kind of weird for us not to represent the one thing they did on Broadway (Spider-Man: Turn Off the Dark),” she laughs. “We tried. We went through that score. We just decided there wasn’t a song in it that we wanted to include, so…”

So get along to One: The Songs of U2 and end the real Irish curse, the lack of homegrown Irish musicals on Broadway. It’s also the best possible introduction to the megawatt talent of the incomparable Linehan.

And keep your eyes peeled for a familiar looking man in dark glasses.