Remembering Tom Fleming from the “Irish ghetto” to the mainstream

"What I've been doing as a writer is thinking about America. Starting from being an outsider,” he liked to say. 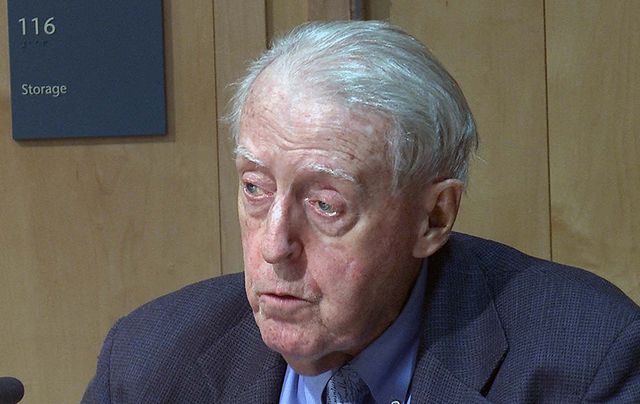 "What I've been doing as a writer is thinking about America. Starting from being an outsider,” he liked to say

Jersey City these days is another of those up-and-coming municipalities, attractive to both striving immigrants as well as those Americans from other parts of the country who want a taste of that New York magic but, you know, can’t afford it.

But there it is, Manhattan, right across the water.  The Freedom Tower shimmers.  The Statue of Liberty beckons.  Ellis Island reminds you who did – and still does – a lot of the building in this country.

When Tom Fleming was growing up in Jersey City, it was an “Irish ghetto,” plain and simple. His father, Teddy, was raised by immigrants from Co. Mayo in a four-story tenement with no heat or running water.

But after Teddy went off to fight in World War I, he returned a hero and found himself a rising star in machine politics, which were still very much an Irish game in mid-20th century America.

In Jersey City the game was run by Frank Hague, a power broker of the highest order.  Hague even earned the nickname “I am the law.”

Fleming – who, sadly, died last week at the age of 90 – once told me his father made him a promise.

"Become a lawyer," his father said, after Fleming graduated from Fordham, "and I guarantee you'll make a million dollars by the time you're 30.”

By then, however, the most powerful parental influence on Fleming had become his mother, a teacher.  He had fallen in love with books and ideas, and it was a love that would be repaid handsomely.  Fleming embarked on one of the most prolific and impressive literary careers of the second half of the 20th century.

As it turned out he was also great human being – generous, funny and smart as hell.

I first met Fleming right after he published one of his many historical novels, "Conquerors of the Sky," a compelling look at the early days of aviation.  I interviewed him for a profile that eventually ran in Publisher’s Weekly.

"Aviation is the quintessential American industry,” Fleming said at the time. “We invented the damn thing. In the beginning, people thought [the airplane] was this symbol of spiritual ascent. Simultaneously, the plane destroyed the American sense of isolation. The symbolism of that appealed to me."

I was glad for the opportunity to meet Fleming, but let’s be clear: I had just turned 30 and he was 75.  I didn’t really expect he would have all that much to say to me, nor I to him, beyond the business of promoting his book.

How wrong I was, as I found out when we began corresponding regularly and even getting together from time to time.

Fleming, of course, was a learned fellow.  He was one of the only authors ever to have both fiction and non-fiction named as main selections in the Book of the Month Club. He ultimately sold millions of books internationally and was a familiar face, appearing in many documentaries on C-Span and PBS.

But perhaps most fascinating were his efforts to balance his Irish background with his interest in more “American” affairs.

"What I've been doing as a writer is thinking about America. Starting from being an outsider,” he liked to say.

It’s hard to imagine a fellow like Fleming, with his Upper East Side apartment and membership in the Union League, as an “outsider.”  And yet, that’s because we have such terrible historical memory in this country.

Fleming, of course, did his best to try and change that.  The American Revolution was his specialty.

But he also wrote insightfully about the Civil War, World War I and the New Deal.  In a sense, he was assimilating through his writing, moving from the “Irish ghetto” to the mainstream.

"I started exploring the American side of the hyphen in history," Fleming told me.

But you never do leave that ghetto, do you?

Because in 2005 he wrote his most intimate and revealing book, an 'Irish American memoir' called "Mysteries of My Father."

It illustrated what was perhaps Tom Fleming’s greatest strength, and what we will miss most from him – writing about both sides of the hyphen.