Who'll the next leader of Fine Gael be? Simon Coveney or Leo Varadkar? 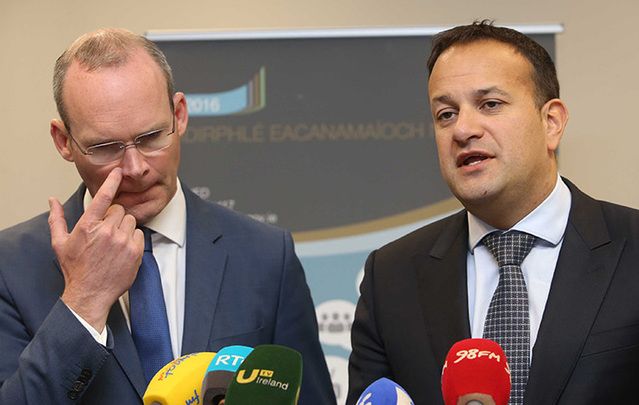 Who'll it be? Simon Coveney or Leo Varadkar?

The Fine Gael leadership contest, including the battle between two to be next taoiseach on June 2, has brought a clash in policies between the only contenders to succeed Enda Kenny.

Documents published over the weekend and early this week demonstrate a clear difference of emphasis, according to The Irish Times.

The paper said 44-year-old Simon Coveney has underlined the need for action on inequality and inclusion, and 38-year-old Varadkar stressed enterprise and reward.

Totally domestic issues have influenced campaigning with no debate at all on what is likely to interest the rest of the world – that Ireland could have a gay prime minister in less than two weeks if Varadkar, as expected, wins.

Kenny announced his long-awaited resignation as Fine Gael leader last week and said he would remain in office as taoiseach until his party elects his successor.  Immediately Varadkar and Coveney publicly launched their campaigns.

Varadkar quickly became a hot favorite, and there were suggestions that Coveney should stand aside. But in recent days a defiant Coveney strongly asserted that the race to become party leader and next taoiseach could be far more competitive than the current perception.

Coveney dismissed the notion that the number of TDs and senators who have pledged support for his rival has left him with a “real mountain to climb.”

His supporters said he was targeting at least six TDs, urging them to reverse their commitment to Varadkar.

Coveney said in Athlone on Monday night that if half a dozen colleagues who have declared for Varadkar were to switch sides, and if he were to do well in the other two electoral colleges for county councilors, and party members, the race could be close.

The Irish Times tracker of voting intention estimates Varadkar has a 46-20 lead among the 73 members of the parliamentary party.  Bookies have him at odds of 1/14.

The amazing and warm public response to Varadkar’s admission that he was gay, and has a partner of two years, contrasts sharply with the reception he might have expected to a similar confession, say, 20 years ago.

Currently, there is only one admitted gay prime minister in the world, Luxembourg’s Xavier Bettel.