Power and passion of Ireland under a Blood Moon sky

"Our county identities and templates are so deeply embedded within our heads...maybe that is both a weakness and a strength of some kind. I am not sure." 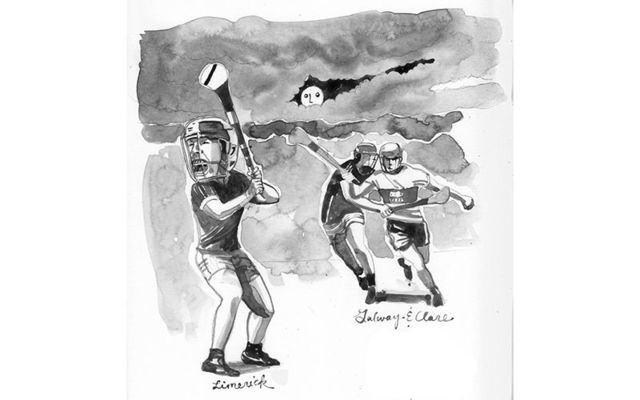 "Our county identities and templates are so deeply embedded within our heads...maybe that is both a weakness and a strength of some kind. I am not sure."

My adorable editor Debbie McGoldrick, drenched above in Saratoga Springs, New York, sends me a plea for another Irish yarn before the end of July and, enjoying myself hugely beneath the special lunar eclipse (obscured by rare clouds over my Clare just now!) I grinningly respond as I continue to avoid the edges of our continuing Irish heatwave by staying indoors in the shade as much as possible.

There is cloud over us in the west as I write, and there have been a few showers all evening but, in synopsis, Ireland is parched to the limit, water is scarce, and many of us wish we were in Saratoga Springs along with Debbie just now.  We are not used to heatwaves or water shortages as ye well know, especially those amongst you who were born here and emigrated probably under drenched umbrellas.

Forgetting all those realities for a while, It is absolutely special under the special Blood Moon eclipse this weekend that, for those of us residing in the west, nothing at all in the spinning of the big wide world above and around us matters nearly as much as the outcomes of the two crucial two All Ireland hurling semifinals being hotly contested over the weekend involving Cork against Limerick and neighbors Galway -- the county of my children -- and the Clare where Annet and I now reside. It is putting it mildly to state that there is a red-hot fever under the Blood Moon which none of us can view because of the cloud cover.

Truly is it not a beautiful reality for us Irish that the power and passion adhering to our special national games, marvelous in both codes, matters so much to so many of us in our lives and prides? Forget about the soccer World Cup just concluded or the triumphs and crises in any other sporting code; nothing matters as much for the majority of us as the destination of Sam Maguire and Liam MacCarthy, the relevant football and hurling cups, come the autumn.

The rising tide of joy will highly lift the spiritual boats everywhere in the triumphant counties. I suspect that Dublin will again win the football title because of a complex spread of social and economic factors, but the thrill of sporting clashes involves the perennial possibility of the upsets that create so much headlines and excitements.

We’ll leave that there for the moment. For the sake of my Galwegian children I, of course, hope that Galway, the current champions from last year, go all the way to Liam MacCarthy glory in Croke Park in the fall.  Fingers crossed for them!

It is intriguing though, I reflect gently, that because our county identities and templates are so deeply embedded within our heads that I, as an Ulsterman feel no spiritual or direct genetic connection with either or any county bar my own.  Maybe that is both a weakness and a strength of some kind. I am not sure.

I have often been deeply touched down the decades by the expressed need of many readers here and elsewhere in the diaspora to discover details of their Irish DNA.  Their roots if you like. I kinda understand that because of my own situation.

Generally, as I’ve said here before several times, your surname, or that of your ancestors, is an almost infallible pointer towards the truth.  For example my lovely but demanding Debbie is McGoldrick by surname and that is a direct point towards Co. Sligo and Yeats Country and also, incidentally, towards the kind of formidable feminine power which keeps a poor MacConnell hack working away after midnight when he should be relishing his third pint under a Blood Moon in Willie Walsh’s great Clare pub in Killaloe under an eclipse that none of us can yet view.

Enough! I’m heading out the door now for Willie’s side door.  Good Night and God Bless ye all.

Read more: Tracing my Irish roots led me to the big family I always dreamed of