Notre Dame faces a fight for its soul

Professors and administrators at the high-profile Catholic university are currently embroiled in a fight for the soul of Notre Dame after it emerged that the university accepted funding from a conservative institute that promotes "science denialism". 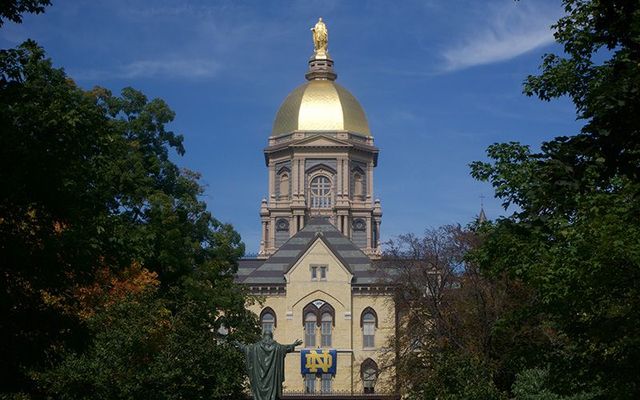 John Duffy grew up in Queens, then spent a stretch of time studying poetry in Ireland before becoming a professor at Notre Dame.

Duffy told the Irish Voice this week that “the ideals of Notre Dame” are important to him, including “its mission ‘to create a sense of human solidarity and concern for the common good that will bear fruit as learning becomes service to justice.’”

Duffy adds, “Many people here take that seriously. I'm one of them.”

Duffy, and many other professors and administrators at the high-profile Catholic university in South Bend, Indiana, are currently embroiled in a fight for the soul of Notre Dame, a brawl that features politics, religion, and gushing rivers of cash.

The Napa Institute, Gehring added, is “funding a new lecture series at the University of Notre Dame that hosted Supreme Court Justice Clarence Thomas as its first speaker (which) is sparking a backlash from professors at the university.”

Including Duffy, an English professor there for more than two decades.

"We should not accept money from organizations that undermine democracy or promote science denialism," Duffy told NCR.

"Notre Dame is a rich, diverse place and there are a lot of competing intellectual interests here. While I disagree with many of Justice Clarence Thomas' decisions, I have no problem with inviting him here to speak. That is what a university is supposed to be about. We argue diverse viewpoints. My concern is taking money from organizations that are doing dangerous things."

"A gift must be consonant with Notre Dame's mission," Brown told NCR in an email. "We have turned down many gifts that did not meet this criterion.”

And so, John Duffy and the Notre Dame Fighting Irish, famous for slugging it out on the football field, are now just like the rest of America: squabbling about things we should not have to squabble about. But with millions of dollars and massive egos at stake.

This is all a long way from the Irish poetry that was once all that John Duffy cared about.

“I went to Ireland to study the poets of the day: Thomas Kinsella, Richard Murphy, John Montague, and of course (Seamus) Heaney,” he told the Irish Voice.

“I had the great good fortune to meet them all.  Dublin in the 1980s seemed a place you could do that: introduce yourself to writers, who might well be willing to sit down with you to discuss their work.”

Duffy added, “I love Ireland, and I didn't. I loved Yeats, Joyce, Beckett. I memorized scads of Yeats, read Joyce aloud for the music, and placed Beckett on a pedestal beside Shakespeare…I didn't love feeling cold and wet all the time, and I seemed always to be both.”

But, Duffy adds, “One night in Ireland genuinely changed my life. I had gone with friends to UCD to listen to Bernadette Devlin give a talk. When we arrived, the room was packed…and we couldn't get in.”

“I'd never heard of him…It was all I could do not to leap to my feet after each number. I listen to Celtic music on a near-daily basis now, and no instrument, no music, means as much to me as the uilleann pipes.”

Presumably, this helps Duffy persist in his advocacy at Notre Dame.

“You asked if my Irish Catholic background influenced my feelings about taking money from people who actively undermine democracy (Napa) or who contribute to the destruction of the planet,” said Duffy.

“I assume you know what it is to be raised Catholic and the emphasis placed on innocence and sin. Does that ever leave us?”