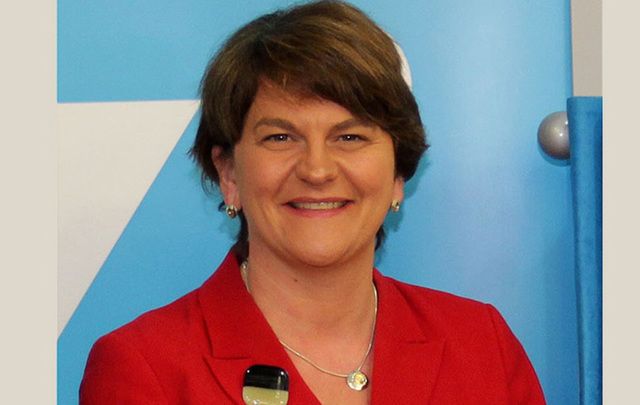 Foster told her party’s launch campaign for the March 2 election that if all unionists did not rally behind the DUP, Sinn Fein could win most seats and be therefore entitled to take the first minister post.

Foster, who was First Minister with Sinn Fein’s Martin McGuinness as deputy first minister until the Stormont administration collapsed last month, said a successful Sinn Fein campaign would mean putting the agenda of O’Neill’s mentor, Gerry Adams, at the forefront.

As well as the DUP, up to five other parties represent unionist policies in Northern Ireland.

Foster told her campaign launch in Lurgan, Co. Armagh, “Come election day, Sinn Fein could have enough seats to be the biggest party, capture the first minister’s post and push to implement Gerry Adams’ agenda for Northern Ireland. Just imagine what that would mean for our way of life.”

According to The Irish Times, Foster appeared to be working to a tactic of depicting Adams as a sort of bogey man for the unionist electorate during the campaign.

She suggested but for the illness of McGuinness that the so-called “ashes for cash” crisis need not have led to the collapse of Stormont.

McGuinness, suffering from a serious illness, quit after Foster refused to stand aside as first minister while an investigation into the botched Renewable Heat Incentive scandal -- or “ashes for cash” scandal -- was carried out.

She said Adams had seized this opportunity to push a wider united Ireland republican agenda rather than the interests of the people of Northern Ireland.  She claimed O’Neill was acting under the diktat of Adams.

Foster focused on Adams a number of times in her speech and repeated that O’Neill was “handpicked to do his bidding.”

Foster added, “So let’s be clear, at this election Gerry Adams is no longer in the shadows. He is front and center of Sinn Fein’s campaign. He is their leader and hoping for the opportunity to implement his radical agenda for Northern Ireland.

Foster rejected Sinn Fein’s claim she and the DUP have been acting arrogantly and with disrespect to nationalism. She referred to an article jointly written by her and McGuinness in the last November “lauding the progress that had been made” in the Northern Executive and Assembly.

She added, “When I signed off on that article, I meant it. And I believe that Martin McGuinness did too. It may well be that Gerry Adams wants to rewrite that part of history too.”