New Yorkers were on the march last weekend to celebrate St. Patrick’s Day, but New York City Mayor Bill de Blasio chose not to join them. 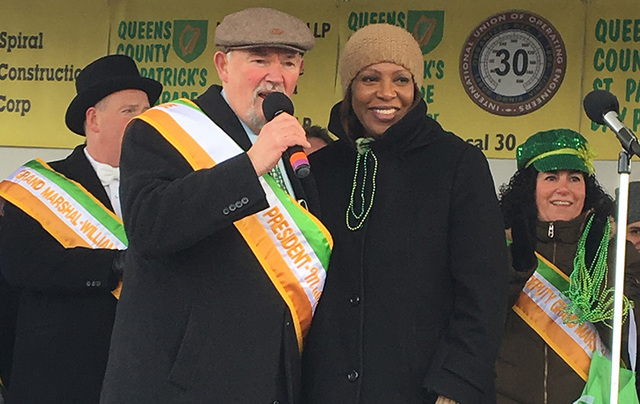 New Yorkers were on the march last weekend to celebrate St. Patrick’s Day, but New York City Mayor Bill de Blasio chose not to join them.

The mayor, up for election to a second term in November, skipped parades in the Rockaways, Staten Island and Sunnyside to fundraise for his campaign in Florida and Los Angeles.  De Blasio has marched in the Rockaways the past two years and heard boos along the route, and also aroused the ire of local residents by holding up the parade with his late arrival in 2015.

His absence from this year’s march didn’t deter thousands from braving the cold and wind to celebrate the Irish holiday.  Some onlookers said they were happy that he wasn’t around.

“It doesn’t matter to us at all. He never does anything for the Rockaways and we don’t really need to see him. He’s an awful mayor,” said one local who did not wish to be named.

New York City Council Member Eric Ulrich, one of only three Republicans on the council, said de Blasio’s no show was disrespectful of the people in the Rockaways who lost so much in the aftermath of Hurricane Sandy in 2012.

There were a few shouts of “Ulrich for mayor” along the parade route, and the 32-year-old is pondering what would be a long-shot challenge to de Blasio.

“I don’t know if I’m going to do it or not,” he said.  “What the mayor doesn’t understand is that you have to be the mayor for all the people, even the ones who don’t vote for you and don’t like you. When you skip parades like this it isn’t good. He doesn’t respect the Rockaways, Irish heritage and Catholic faith.”

Scott Stringer, the New York City comptroller who is also considering a run for mayor, didn’t miss de Blasio.  “It would be nice if the mayor was here, but you know what, I’m here,” he said.

Cahill was in New York to meet with the Irish IDA and a building group which will be based in Cork later this year.  The political machinations around the St. Patrick’s season have also brought about some controversy in Ireland, with many Irish calling on Taoiseach Enda Kenny to decline the White House invitation to meet with President Donald Trump on March 16.

“I don’t agree. The taoiseach should go,” Cahill said.  “It’s a very simple argument that the two offices are meeting and it’s a tradition that we’ve had for a long time. Regardless of who is in either office, it’s good to meet.”

De Blasio is hosting the annual mayor’s St. Patrick’s Day breakfast at Gracie Mansion on the 17th, and will be attending Mass at St. Patrick’s Cathedral.  It is also expected that he will march in the St. Patrick’s Day parade on Fifth Avenue, which he joined for the first time last year after the inclusion of the Irish gay group Lavender and Green Alliance.

New York Governor Andrew Cuomo, whose frosty relations with de Blasio have been well documented, has confirmed that he will march on Fifth Avenue.