Mysteries of life at Christmas - a tree grows in Killaloe

A small story about a small tree and a nest of robins last spring, and about a Clare countrywoman with a good earthy sense of humor. 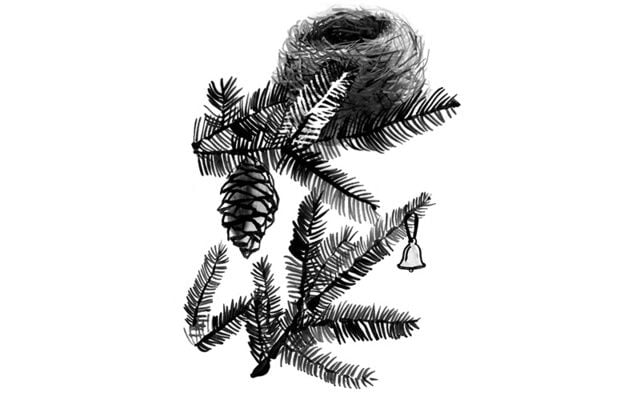 "A small tree and a nest of robins." Caty Bartholomew

This is a small story about a small tree and a nest of robins last spring, and about a Clare countrywoman with a good earthy sense of humor a month or so before that. It is also a yarn about the mysteries of life.

There is, also, a mysterious conclusion to it for now about the possibility that in late January, no matter where you are residing now as you read this, that Cormac has a very special gift in store for two of you. That will emerge later in detail.

Anyway, back to the small tree. In late November last year, facing into our first Christmas in Killaloe by the Shannon, I drove down to a garden center in Ardnacrusha to purchase a Christmas tree for the front room like everybody else nowadays.

I was a late shopper as it happened, and most of the nice handy cut trees for sale were gone already. Those that remained were either too big for our small room, or forked or crooked or flawed one way or the other.

Read more: Magic in my peaceful song - Christmas In the Trenches

As I was sorting through them I exchanged the time of day with a lively middle-aged lady who was buying flowers.  After we spoke for a minute she looked at me sharply and said, "Are you by any chance the Cormac that used have a late night program on Clare FM a couple of years ago?"

I confessed that I was the same man. The program, which ran until midnight on weekdays, was called “Cormacology,” incidentally, and was great craic to do because lively listeners called in on the phones and chose most of the music and effectively did my nocturnal work for me.

"Cormac," says she, "do you know that I used to go to bed with you every night of the week!" And she gave me a warm huge hug on the spot.

And then she said with a chuckle, "You were not that great in the bed, though, because I used to fall asleep after about 20 minutes!"

And it was that good lady who suggested that, instead of buying a chopped-down Christmas tree, I should instead talk to the gentleman in charge and buy a living Christmas tree in a pot. He had plenty of those on offer, and I did that at once and drove home happily with the head of the little tree sticking out through the car window.

We erected her in the front room the following week. She fitted the corner like a glove.

She was delicately beautiful, was equipped with two or three small pine cones, and when Annet decorated her with the fairy lights and chains and cards and trinkets of the season she was for sure the star of the show.  And we watered her pot every night to keep her happy.

When Christmas was over I brought her out the back garden in her pot and set her down at one end of our willow hedge. The willows are very leafy in season, and soon she was almost entirely hidden from sight.

Read more: A child’s Christmas in a West Kerry village

Still, though, from time to time I noticed that our resident cock robin used her as a perch, along with sparrows and finches. In midsummer, she was totally hidden from view by the luxuriant growth of the willows, and I totally forgot about her until the bite of this winter stripped and ripped the leaves off the willows.

She emerged again, a foot taller at least, greenly bright and clearly willing to serve us for another Christmas in the front room. I brought her into the conservatory on the last day of November to ready her for duty.

Dammit but life is wondrous altogether. On close examination, I saw that we had omitted to remove one small golden bell decoration from the lower branches a year ago. And, incredibly, there was the compact whitely wispy tiny robin's nest crafted into the branch below the bell, right against the trunklet.

Our little tree had raised a family we knew nothing about until now. Maybe it is because Christmas is fundamentally about a family making do with the best available accommodation that I was so touched by the sight.  I truly was.

Am I a maudlin old fool? I don't think so at all.

We will establish her in the front room next week and decorate her again for the upcoming season. She will be well watered and tended. When Christmas is over we will put her back out in her own place in the garden and probably release her from her pot so that she can root into the true Ireland and maybe raise another family of robins or finches around the time when the willows are greening around her again. That is my small story about a small green tree.

Ye will have to wait until the New Year before I reveal how, out of the goodness of my heart, I will be in a position to maybe transform the futures of one or two of you long before Christmas hurtles towards us again. But I promise faithfully that I will keep my word on that one.

Sure don't I always?