Magic in my peaceful song - Christmas In the Trenches

"I knew I had a good song... Germans in the cosmopolitan gathering came up to me as son as I’d finished, tears streaming down their faces, and hugged me." 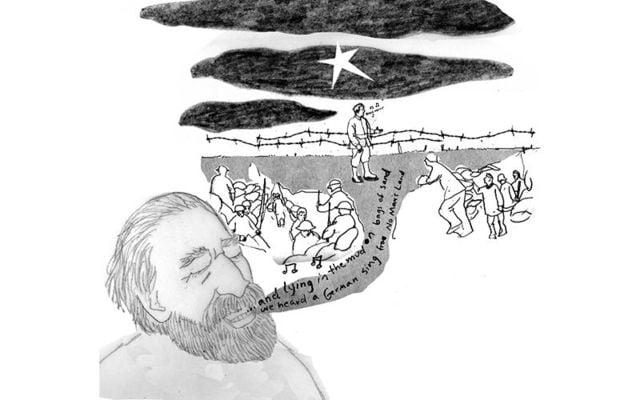 Cormac MacConnell reflects on a touching Christmas song he wrote

Our gods move in mysteriously wonderful ways beyond my ken.  I was standing outside the back door under a bright full moon a little while ago and I was slightly troubled about the writing task ahead of me.

Truth was that I did not want to write even one word about threats of war across the globe, ugly incidents of all kinds everywhere, allegations of sexual misconduct by powerful men, war criminals poisoning themselves in a Hague courthouse, all kinds of dire tidings of every kind. I wished to write something gently peaceful for the times that are in it as a kind of antidote.

The radio was playing a Late Date show on RTE as I stood there, and suddenly my problem was solved entirely.  The deejay said he wanted to play a kinda special song that was seasonal and that he liked a lot at this time every year, and dammit what did not then come soaring across the airwaves but the song of peace and goodwill which I wrote more than 20 years ago on a moonlit night on the shores of Galway Bay.

I swear that a salted tear formed in the corner of my left eye as I listened. It was as if I’d never heard it before. And that was the way my writing problem for the night was solved.

That song came to me, air and all, inside two hours after I’d watched a grainy documentary on TV about the incredible spontaneous Christmas Eve truce in World War I on the edge of No Man’s Land between the bleeding trenches in which many Irish died. Ye are aware of the story I’m sure.

The ordinary soldiers on both sides stopped killing each other, began singing Christmas carols and then, in defiance of their generals, came out of their trenches and fraternized for the night. They even played a game of soccer during the night, shared drinks and cigarettes, and enjoyed precious hours of peace and goodwill before the generals ordered the resumption of hostilities the following morning.  It is factually recorded in full in the history of that terrible conflict and was covered in the documentary I’d watched and been moved by.

I’ll be totally honest here. I had written some songs before this one because I hail from a musical family and am a wordsmith by trade. Sadly, however, anything I’d written before this night was basically maudlin tripe. 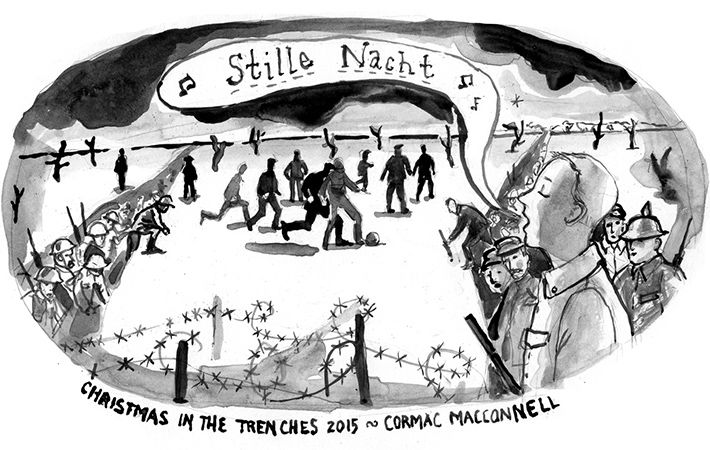 Another illustration by Caty Bartholomew.

On this occasion, however, again with a God involved for sure, I crashed through the glass ceiling of my limited creativity in some mysterious way. The song is called “1915 Christmas In the Trenches” and, since that night, and my presentation of it a couple of years later to my friend the musicologist PJ Curtis of Corofin, it is true to say it has become a minor classic of the upcoming season and has been covered and recorded many times by some of our best Irish singers, including the likes of Daniel O’Donnell and Tommy Fleming.

Read More: You know you're Irish at Christmas if...

For my money, however, the classic version is the first one.  It was recorded by the Kilfenora nephew of PJ Curtis, Jerry Lynch of the golden voice with the Clare timbre attached and Jerry has since sung it all over the world, even on the edge of No Man’s Land itself.

There are many other recordings that have emerged since that night, long ago, when I walked through my front room in the dead of night, my children asleep, and sang it towards the stars with my own cracked-up and heavily nicotined voice.

At the time I was a regular in the great upstairs singing sessions in the musical pub The Crane in Galway City.  The first time I was called upon to sing after writing the peace song was about this time of year. The bar was crowded and I normally would not be listened to with much interest but, in seconds, I knew I had a good song because there was a hush throughout and several middle-aged Germans in the cosmopolitan gathering came up to me as soon as I’d finished, tears streaming down their faces, and hugged me.

That was when I knew I had cracked the glass ceiling. It’s a great feeling. It has not ever really happened since.

Maybe tomorrow. Who can tell? As I said at the beginning our gods move in mysterious ways.

Maybe listen to the song yourselves and feel as peaceful and serene as I feel now.

What's your favorite Christmas song? Let us know in the comments