A child’s Christmas in a West Kerry village

Co Kerry native Maurice Brick recalls the Christmases of his childhood spent in a small village on the coast of Ireland. 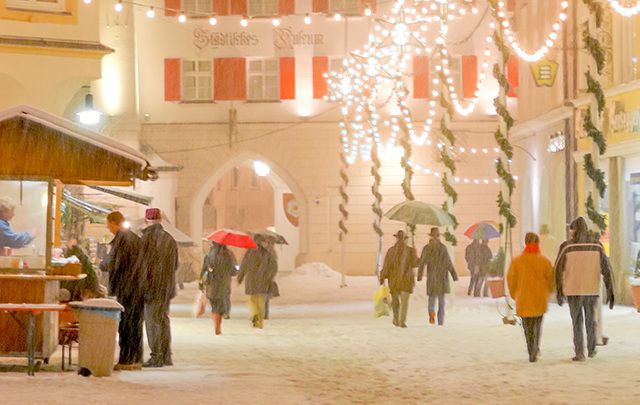 Christmas in the Kingdom is a special time like no other. iStock

It’s rather strange really, but at this time of the year, my thoughts take flight across the wide ocean to Gorta Dúbha for Christmas.

Wouldn’t you think that, after fifty years or so, such thoughts would be forgotten by now, but no, not at all – they are as vivid now as if these events occurred today or yesterday.

There were ten houses in the village of Gorta Dúbha when I left and the neighbors were as nice as any in all of Ireland. Gorta Dúbha is a tiny village, nestled in between Béal Bán strand to the north and Márthain Mountain to the south in Ballyferriter, West Kerry. We were so close to the Atlantic Ocean that the spray from the waves left a dusting of salt that seemed to permeate the area and was forever in our midst. We didn’t get much snow ever, but we got our share of sweeping rain and gales of wind that sheared grass from roots and ferociously high waves that, at times crested Sybil Head Mountain which groaned under the burden of protecting us from the angry, slashing sea.

The houses were comfortable like the people and you’d love to walk into any one of them for you would receive a Saint’s welcome and whatever was on the table to eat was yours to share with them.

Everyone in the village helped one another and my favorite days were those when a group called a “mitheal” gathered to cut the turf, save the hay in a rick, and the threshing of the oats. Even though the work was hard and tedious at times, we had great fun with each other spinning yarns, recalling past acts of courage and foolishness and everyone was dealt an even hand when it came to dishing out the latter. Mam was greeted with great joy when she arrived with the tea in the bog on “turf cutting day”. Cutting turf is, for some unfathomable reason, the hungriest work on earth.

Regular bread and butter acquired the taste of shop-bought cake and was eaten with gusto and helped with hot tea ladled out into tin saucepans from a canteen. The tea and bread were accompanied by a hefty helping of pig’s head and although it was not a favorite of mine, for some reason I would eat it heartily in the bog and even wish for more. I remember once when recuperating from a bad cold, my friend Eibhlín a’Ghreasaí from two doors up, remarked in an accusatory manner I might add, that it was the lack of a few sound helpings of boiled pig’s head that contributed to the onset of my cold. She may have been right but it didn’t increase my appetite for it.

Christmas was just magnificent in our village. Everything was quiet and very simple. Money was scarce but there was a wealth of goodwill in the hearts of the people.

You would notice a change coming over them about a fortnight beforehand, a lightness would begin to weave into their faces and you’d know it was in anticipation of the holy event of Christmas. You would also notice an extra little spring to a step and tracings of smiles as they went about their daily chores. While the farm work for the men lightened an excellent deal, alas, that of the women did not and since they cleaned and decorated, the workload may have been even more. The men, however, did not volunteer extra help, although they could be prevailed upon to whitewash the walls of the house in a pinch. That’s how life was then.

The house had to be spotless, clean-swept, and ready for decorating at least a week before Christmas. The parents usually went on a day’s excursion to the town of Dingle to “bring home the Christmas” during the week and the children of the village would troupe to the house in the evening for a fistful of “sweets”. There was excitement and chewing and muffled giggles all the way home. 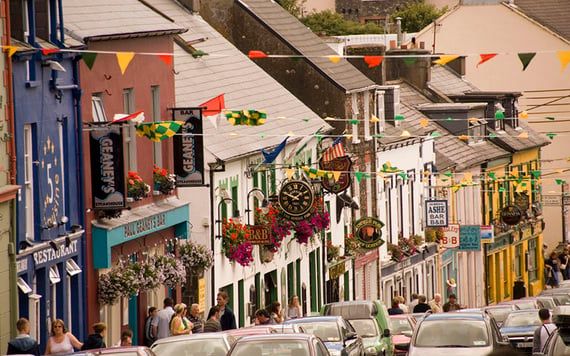 We had a nice supper on Christmas Eve before heading out for Midnight Mass and a healthy helping of Christmas cake went down easy for anything with a sweet taste was in great demand. A narrow little bohereen known as the “Tochar” was our pathway to the Church in Boulteen and what an awesome sight awaited us from a higher vantage point – there you would see the candles lighting in all the windows of every house in the parish.

Upon arriving home after Mass, another hefty slice of Christmas cake was in order. Then Mam would remind Dad about the “gabhall” of hay for the front door. Dad would go to the haggard and draw enough for a tidy bale and deposit it at our front door.

We all went to bed then knowing that the donkey, carrying Joseph, the Virgin Mary, and the Baby Jesus, would have enough to eat while they stopped for a visit at our house on Christmas Night.

What are your favorite memories of Christmas in Ireland? Share in the comments!