Will Ferrell, Mark Wahlberg, Mel Gibson and John Lithgow were in Ireland to promote their new holiday hit Daddy’s Home 2. 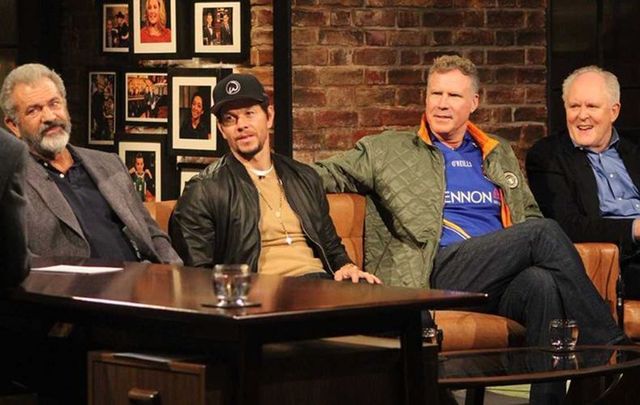 Will Ferrell, Mark Wahlberg, Mel Gibson and John Lithgow were in Ireland for a couple of days last week promoting their new holiday hit Daddy’s Home 2.  Will, a frequent visitor to Ireland who has roots in Co. Longford, was adamant that Ireland had to be on the film’s European promo tour.

"It's always great to come to Dublin to promote a movie, just because the Irish turn out to see movies like no other," Ferrell told RTE.

"They're such great lovers of comedy here and a great fan following, so it's definitely a must-stop."

The first Daddy’s Home also hosted a premiere in Ireland a couple of years back with Wahlberg and Ferrell, and that one went on to gross a boatload of money around the world.  The stars were spotted around Dublin on several occasions last week; Wahlberg even made time for a round of gold at the K Club in Co. Kildare.

“I played Portmarnock the last time I was here. You think about Old Head in Kinsale, there are some of the greatest golf courses in the world here,” said the former rapper known as Marky Mark.

“For me the greatest thing would be to come here and just go on a guys’ golf trip and take my sons and come for two weeks and travel all around and play all the courses, but I don’t know if my wife will let me do that.

“Every time I get a chance, I come back here. It's amazing. It's more of a celebratory atmosphere, people are extremely nice and polite, and it's always a good time.” Wahlberg also revealed that Rory McIlroy is one of his buddies, and that they may team up for a project in the future.

“My favorite golfer from Ireland is Rory McIlroy. I had dinner with him the last time I was here. He and I share a mutual friend in Dermot Desmond, so we got to hang out and we may do some things in the future together,” he said.

Ferrell, who was clad in a Longford GAA jersey during one of his appearances, says he wants his kids to appreciate their Irish roots.

“My wife is Swedish and we always spend time there every summer. We really emphasize the Swedish side of our family so we really we need to know more about the Irish side for sure,” he said.

“We’d probably have to swing through Longford, I’d love to do a couple of weeks tour of the whole country with my kids."