How one Irish immigrant helped lead the charge against the Ku Klux Klan in the 1920s. 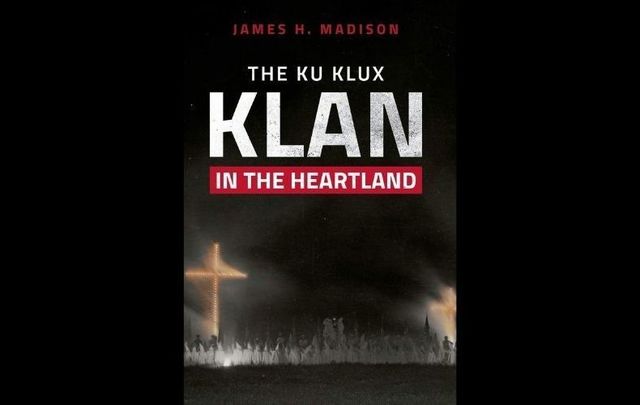 "The Ku Klux Klan in the Heartland" by James H. Madison.

We know Halloween is coming up, and we know there is a virus still raging out there. But cute kids and weird adults are still going to put on masks in an effort to have some holiday fun.

This even though some other weird adults have decided that following rules about wearing a mask is submitting to some kind of tyranny. These folks must be really annoying at Stop signs and traffic lights.

But this is all getting eerie, even scary.

This week, I was also flipping around HBO and finally caught Watchmen. In that Emmy-winning series, law enforcement officers wear -- guess what? -- masks to conceal their identities from criminals who might otherwise seek revenge.

And then I was flipping around Netflix and happened upon old Bob Dylan nasally reminiscing about his 1975 Rolling Thunder Revue tour, during which he became obsessed with -- wait for it -- wearing masks while performing his music!

Then there’s an even scarier mask story. It involves an Irish immigrant known as “Mad Pat.”

It begins with those people -- not a few of them Irish Catholic Republicans -- who want to ignore the fact that our president is currently engaged in a bizarre tango with conspiracy kooks and white supremacists.

They’ve convinced themselves they don’t have any (if you will) skin in the game when it comes to fighting those who believe there is a “master race.” They have made peace with the fact that one part of the Trump coalition explicitly thinks some folks are simply not worthy of the title “American.”

To them, I present Irish immigrant Patrick O'Donnell.

“Mad Pat,” as he was known, fought “master race” types in the 1920s who believed your grandparents and mine were simply not worthy of the title “American.”

“Opponents struggled against the ardor for 100 percent Americanism and against the (Ku Klux) Klan’s skillful tactics of community building and intimidation,” James H. Madison writes in his new book The Ku Klux Klan in the Heartland. The book reminds us that not long ago, Irish Catholics were forced to take to the streets to fight against those who would build a wall to keep out immigrant Catholics, Jews, and other minorities.

Activist “Mad Pat” O’Donnell was invited by an AOH chapter in Indiana to give a St. Patrick's Day speech. O’Donnell “vigorously attacked the Klan,” Madison writes, then called for new city laws “to prohibit marchers from wearing masks.” This would make it impossible for anti-Catholic Klanners to hide behind their hoods.

O'Donnell also told a Fort Wayne audience that the “fight against the Klan was not a Jewish fight or a Negro’s fight or a Catholic’s fight, but an American fight.”

Catholics also organized a boycott of the 1923 Tipton County Fair’s “Klan day,” while 800 Knights of Columbus members organized an anti-KKK rally. Other activists in the Midwest broke into offices known to host Klan meetings, to obtain and publish membership roles, exposing Klan members.

Most famously, on May 17, 1924, Klanners descended upon South Bend, Indiana. Notre Dame students promptly marched to a KKK meeting site. They fired anything they could get their hands on at the building, including fruits and vegetables from a nearby grocery.

“There was some embarrassment over the stereotypes of young Irishmen fighting in the streets with potatoes,” writes Madison. But a few years later Notre Dame president Reverend Matthew Walsh approved the university’s new nickname -- The Fighting Irish.

To some, of course, such behavior was appalling, proof these Irish were simply not true Americans.

“Rancid hatred in its worst form,” organized by a “cursing mob of students who showed no respect for age or sex,” the Klan’s Fiery Cross newspaper declared.

Surely some thought there were fine people on both sides in South Bend.