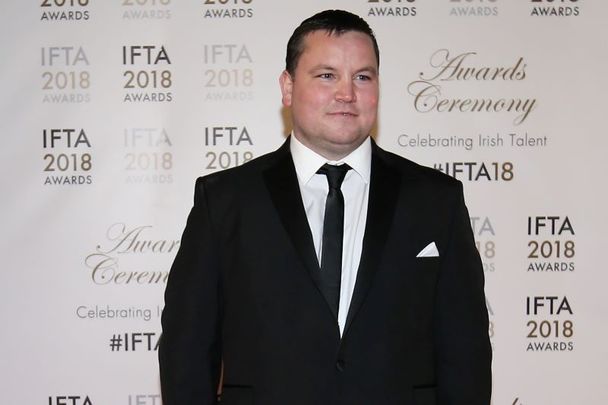 John Connors at the 2018 Irish Film and Television Awards. RollingNews.ie

Then his towering turn in the acclaimed Irish crime flick Cardboard Gangsters (the most successful Irish film of 2017) led to a Best Actor award at this years IFTA's (Irish Film and Television Academy awards)  whereupon he immediately unloaded on the system that failed to support him or his vision.

In person Connors, 28, speaks with the urgency of a man who has been waiting all his life to get a hearing. The onscreen intensity he brings to his film work is reflected in his off screen interactions.

Given his background as an Irish Traveler, it makes complete sense. He wants you to understand that what he's doing actually means something, and when you listen to what he has to say, you'll be left in no doubt.

Read More: The carnage and hate of US gang violence seen through an Irish Traveler's lens

When people who have been overlooked for years finally find their voice they can astound you with their eloquence. It's as if all the pent up stories they have kept a lid on for years burst out all at once. All you can do is go with their flow. Hopefully you'll learn something.

This week Connors is in New York for the Craic Film Festival, promoting his latest film Cardboard Gangsters, for which he recently won the Irish Film and Television Academy's (IFTA) Best Actor award.

It would be good to write that his talent was spotted early and that the Irish film world came on board to support his rise, but that didn't happen. In fact even after the accolades he has struggled to get an agent.

Raised in Ireland in the still widely discriminated against Travelers community, he learned early on that voices like his simply weren't heard on the national stage and even when they were they were rarely listened to.

“It was a long journey,” Connors tells IrishCentral. “I was five the first time I realized I was different. I was in school and a kid called me a knacker (a dehumanizing Irish slang term for a working class kid). I didn't know what it meant. But there was venom behind it so I knew it was a bad word. I asked my mother and I remember her reaction, which was who said that?”

Later a teacher actually called Connors a knacker in class when he was 11. “I started to internalize the shame of it,” he says. “I wasn't consciously doing it. At a certain point I would stop saying who I was just so I could get through the situation. I know it did it did a lot of damage to me, I struggled majorly with my identity. I had a gay friend who grew up in Darndale, in a very rough area, and he experienced the same sort of thing.”

It was finally realizing that his greatest strengths were actually bound up in his identity as a Traveler that changed – and saved - him. “For Travelers who wanted to be successful they often had to deny or give up their identity. Many have done that. But I realized being who I am and being loud and proud was my strength.”

Adversity can be useful for an artist, if it doesn't go on too long. Connors voice has the no-nonsense directness of someone who has had to daily snatch his identity out of a system that was created to oppress it and he never loses sight of the fact, not for a second.

In town for the Craic Fest and the east coast debut screening of Cardboard Gangsters he reflected on his recent Best Actor win for the the film, and the now viral speech he gave that uncomfortably and often hilariously reminded the Irish Film Board how they had passed on the project.

“It wasn't planned,” he confesses. “I genuinely did not think I was going to win it. We weren't supported by the Film Board and I didn't think it was possible to win one if you weren't. I knew they had to nominate us because of the success of Cardboard Gangsters, but I seen this happen before to films that weren't supported by them. You might get a nomination but you wouldn't win. I genuinely couldn't believe it.”

The only speech that Connors had prepared, on the off-chance, was dedicated to his father. But walking to the podium when his name was announced as Best Actor he decided this could be a sweet revenge moment. Then he launched into that epic speech, the one that immediately went viral, where he congratulated the Film Board and then stopped.

“Oh wait,” he said, “you didn't support us.” That line got a huge laugh. “I think the way to approach things sometimes is through comedy as a joke. It can be a lot more effective. Getting there despite not getting help meant it was made without compromise, we got our own way, which made it sweet.”

The chair of the Film Board Annie Doona approached Connors afterward and acknowledged they had gotten it wrong. “She said she hopes I will plan to go back to them with a new project and I am, and I hope they'll be more open minded next time, and maybe be a bit more diverse about what stories they tell about Ireland. From what I see they're not doing that right now. I think a lot of that comes from the fact that the people who are funding the films come from the same sort of backgrounds.”

In Ireland there are too many sleiveens, Connors says (an old Irish word for tricksters). “They want to say what I said but they won't say it. When they have the opportunity to say it they won't say it. They're afraid. I know filmmakers who don't want to step out of line with the Film Board one bit. I'll be honest, I don't give a s—t. That's my approach to life.”

But the Irish don't really go in for plain speaking, do they? We prefer wiggle room, or whatever you say say nothing, right? “Well I'm bored out of my sh—te looking at people like that to be honest with you. I get it from my family, from my grandmother. She and my grandfather were one of the first Traveler activists.

People who couldn't read or write but brought a lot of our struggle forward. So I grew up being inspired by them. Anything I've done so far has been because people can see there's conviction behind it.”

Connors says he has become obsessed about talking about class because in Ireland no one talks about it. “I think the last person who used to do that was Brendan Behan. That's why you have to go back to the 50's and 60's. Every all the left directors and filmmakers have largely ignored it. It's the taboo subject that no one wants to touch in Ireland. And we have a total clasist society. The Irish film industry is the absolute epitome of that. They all went to Blackrock or Belvedere like 90 percent of them.”

If they think he's going to wait for them to come to their senses he has some news. “If they're not going to open that door I'm going to kick right though it. Now I have put myself in the position, totally by accident because I didn't plan it, of criticizing the Film Board. It has been challenged in the media since Cardboard Gangsters, and the talk about class is happening now.”

In Ireland directors and the Film Board want to produce films they believe will have commercial appeal. But they're using a Hollywood formula without the production values, he says.

“There's never a guarantee of that succeeding though. The budgets and the estimates are tiny. Cardboard Gangsters was a small budget film but we had a lot of successes, so you really can't predict these things. We need to recognize what we're good at. We need to promote distinctive voices. In Britain they support people, voices, filmmakers. In Ireland we have you have to get down on your knees and beg RTE and the Film Board for projects and storylines that they agree with.”

Meanwhile Connors will film his next role in New York based writer and director Colin Broderick's forthcoming film A Bend In The River. “He contacted me after he saw my speech and I said yes just based on on our conversation,” Connors says enthusiastically.

The film, which shoots in Ireland in April, will see him star alongside former boxer John Duddy, who's career he has long admired.