Each country is seeking to deal with immigration in its own way. None have been successful, least of all the United States. 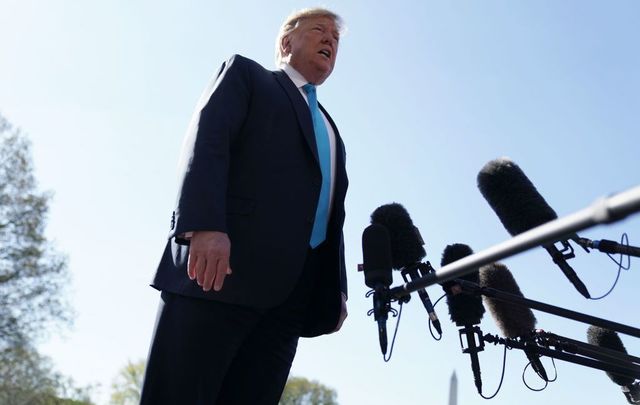 U.S. President Donald Trump speaks to members of the media prior to his departure from the White House on April 10, 2019, in Washington, DC. President Trump will sign an executive order on energy and infrastructure during his visit at the International Union of Operating Engineers International Training and Education Center in Crosby, Texas. Alex Wong/Getty Images

Migration is the biggest story of the 21st century as the Third World is hurled upon the great powers.

Countries from Australia to European Union members to the United States have had to confront the issue like never before.

Failed states are part of the issue, as is ethnic warfare within countries, as is climate change as crop production is increasingly endangered by drought conditions.

Each country is seeking to deal with the issue in its own way. None have been successful, least of all the United States.

It looks like President Trump is now going to the Hail Mary pass, going for the hardest of hard solutions.  Behold the emergence of Stephen Miller, Trump’s most hardline of all his staff on the immigration issue.  There can be no doubt after the firings this week of Homeland Security head Kirstjen Nielsen and several underlings that Miller’s hate and destroy policy has won the battle within the White House.

Miller is the man who puts words in Trump’s mouth, such as “American carnage” in his inauguration speech, and “America is full up” during a recent visit to the border.

Now Miller has emerged from the shadow in all his ugly glory.

The contradictions are everywhere. Last week the Trump administration announced increased numbers of visas to bring needed farm laborers mainly from South America to the U.S. A few months ago he talked about letting record numbers of legal immigrants come in.

Now, Trump is set on following Miller’s hardcore intentions of stopping illegal immigration and asylum seekers on the southern border.

He might as well try and stop the wind.  A harsh enforcement policy is doomed to failure as Trump has already proven with the debacle of locking up and separating migrant children from their parents.

Incredibly it appears Miller/Trump are now set to carry out and double down on that policy while also illegally trying to bar asylum seekers from having their cases heard. There is even talk of closing down ports in cities such as El Paso, absurd as that seems.

Enforcement alone will never stop thousands showing up daily at the border. The people, mostly families, many mothers with young babies, have left far worse behind in Guatemala or El Salvador where city streets have been turned into killing zones and violent gangs rule the roost.

Trump’s response to the exodus from such countries is to cut off aid to them which will only make a mass exodus more likely. When you have nothing left to lose, marching north with even a faint flicker of hope of getting asylum is a far better option than staying put and having your family under constant death threat.

Addressing the reason for the exodus by creating trained and non-corrupt local special forces to protect the citizenry would be a far better use of American funds. Similar training was carried out with Mexican Navy seals who brought down and captured El Chapo in Mexico.

There are also massive educational needs that could be addressed, creating economic incentives for private companies and rooting out corruption in the government and judiciary.

None of these are easy things, but consider what was accomplished in Colombia after the death of the Medellin cartel and the peace deal with FARC.

But Trump wants only a showdown against women and children at the border. If he begins separating families again and shipping kids all over the country he will surely pay a price with American voters.

This country is better than that. Maybe this time he will be forced to acknowledge that.