O’Doherty, a 49-year-old geography teacher from Co. Waterford, was on the expedition to promote a “share the load” message for those who feel their mental health issues have become a hidden burden. 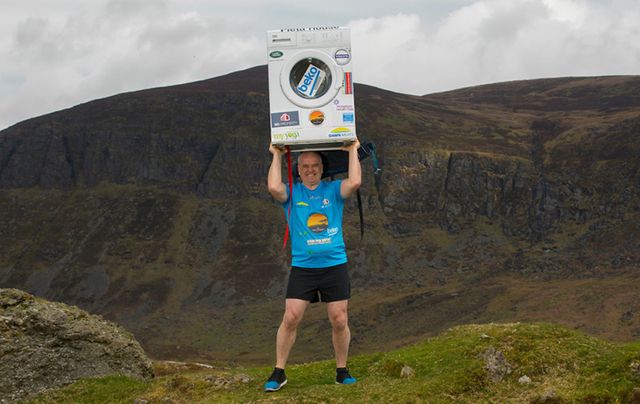 An Irishman who tried to lug an 88 pounds weight washing machine up Africa’s highest peak, 19,340 foot Mount Kilimanjaro, was forced to give up three hours from the summit after an eight-day hike.

Enda O’Doherty fell victim to altitude sickness, but his colleagues made certain his appliance made it to the top.

O’Doherty, a 49-year-old geography teacher from County Waterford, was on the expedition to promote a “share the load” message for those who feel their mental health issues have become a hidden burden.

After training hard to carry the washing machine, he undertook the mission to raise funds for Pieta House, a suicide and self-harm charity.

After he fell victim to altitude sickness, he told the Irish edition of The Times of London that a porter took the machine the rest of the way to the top. It was accompanied by his wife Maeve and 28 members of the 30-strong expedition crew.

“The share the load message became a reality for me. Sometimes when you are under pressure and in crisis, you need others to lend a helping hand and that is exactly what happened in this situation,” O’Doherty said.

“At various points on this hike I needed help, friendship, baby wipes, and eventually someone to carry my washing machine.”

'Our motto has always been to share the load' - Irish crew climb Mount Kilimanjaro with a washing machine https://t.co/HMuK0dvvz2 pic.twitter.com/pHwIEDxbRS

The final leg of the eight-day hike can take up to 17 hours on Kilimanjaro at temperatures as low as -20C.

O’Doherty said that the altitude sickness was noticeable after the second day. Symptoms include difficulty breathing, dizziness, vomiting and headaches.

“I wasn’t sleeping and I began to get worried that it would get worse,” he said. “Then the ability to eat properly diminished and I knew I was in trouble.

“On the last day, I was taking about four steps a minute and hallucinating before I made the decision to keep myself safe and turn around.”

While he was disappointed not to finish and shocked at how rapidly his health declined, he was proud that more than €170,000 was raised through his project for Pieta House.

@beat102103 #kilimanjaro team are home safe and enroute to #Waterford with the washing machine. Raised close to €170,000 for @PietaHouse pic.twitter.com/EMrKHfhML9

“In the two weeks that we were on this expedition, 20 people took their lives in Ireland, and I believe one of the main reasons was because they did not share the load,” he said.

O’Doherty carried a washing machine from Belfast to Waterford in 2015, and while climbing up Slievenamon, in County Tipperary, in 2016.

He said that the hike up Kilimanjaro was the most exhilarating and extreme journey of his life.

Here's a feature on Enda and his journey, filmed in advance on his journey: