What is it with a lot of Irish people who feel they should get everything for free? 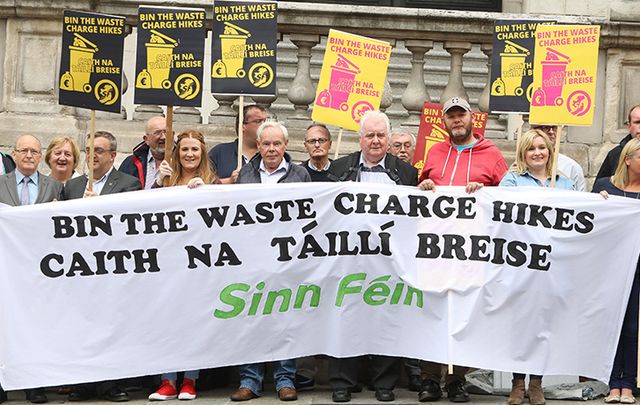 What is it with a lot of Irish people who feel they should get everything for free?

First it was refusing to pay for water in the same way that consumers in practically every other country in the developed world do with consumption being metered.  Now it's refusing to accept a pay by weight system for garbage collection even though countries across Europe are adopting this approach to increase recycling and reduce the amount of waste going to landfill.

Much of the driving force behind these changes comes from the EU with its rules on water conservation and treatment, on the recycling of plastics and packaging, on landfill reduction and protection for the environment.

But even if we were not part of the EU, we should still be doing these things.  Our water system is a national disgrace due to under-investment and like everywhere else, we are rapidly running out of landfill sites for waste.

Last week the government announced that it was again postponing the introduction of pay by weight for garbage, given the ongoing negative reaction to the proposal.  In fact the system was supposed to begin in July 2016 but was then put off for a year. Now it's been put off for another six months because the government knows it can't get it through the Dail at this stage.

Read more: How Brexit could result in an Irish fishing rights war

Just like what happened with the attempt to get people to pay for water via meters, the attempt to introduce a better way of paying for garbage disposal is being opposed by opportunistic opposition politicians.  For them, undermining the government is more important than doing the right thing.  It's no surprise that most of them are on the left, led by Paul Murphy and Richard Boyd Barrett, those wannabe working class socialists who are really nice middle class boys.

Sinn Fein, spooked by losing support to the lefties like Murphy, also opposes charges on the basis that they are defending the less well off and that all services should be paid for from central funds through general taxation.

There are two problems with this.  Firstly the taxation comes mainly from ordinary workers, and secondly, it does nothing to encourage responsible consumption of water or disposal of garbage.

Fianna Fail, of course, has been spooked by the rise of Sinn Fein, so it has demanded that the garbage proposal again be postponed until a regulator has been appointed to prevent over-charging by bin companies in the future.  Which means that the can (and all the other garbage) has been kicked down the road again, since the minority government would be defeated in the Dail if it pushed ahead now.

One can take the view that the Fianna Fail position has some merit since the bin companies will always try to maximize profit, although the government believes there is enough competition between the competing companies to prevent that.  In many areas in Dublin now, since garbage collection was privatized some years ago, there are two or three different bin trucks on the same streets every week, and rivalry between the competing companies is intense.

We already pay for garbage disposal, of course, but it's on a flat annual charge and/or a per lift basis.  This means there is not nearly as much incentive to recycle and minimize waste as there would be under a pay by weight system.  But some people fear they will end up paying more, and that is now being exploited by the same groups who opposed water charges.

The overall point, whether it is water supply or garbage disposal or other services, is that we seem to have a talent here for turning relatively straightforward matters into complicated, divisive issues.

On water, as we have explained in this column before,  the leftist argument that we are already paying through general taxation is completely bogus.

When the rates (local taxes) which used to pay for the water system were abolished over 40 years ago they were replaced by extra VAT (sales tax), but this went into central revenue.  From there it was spent on schools, hospitals, and other things that voters wanted over the years instead of being used to upgrade the water system.  The result is that the whole water system now needs major investment, and the most sensible way of funding that is by water charges based on consumption.

The attempt to do that, as you know, resulted in hysteria among a section of the public, whipped up by the radicals on the left, Sinn Fein and others.  And it appears now that the same thing could happen in relation to pay by weight bin charges.

Much of this is a result of a mindset that has developed here in recent decades in which some people have an inflated notion of their "rights.”  In this welfare culture people don't want to pay for anything, and at the same time demand as much service as possible from the state for free.   And if this is threatened they get very angry.

The rapid increase in welfare payments and supports during the boom here fostered this entitlement mindset in a section of the population.  Whether it's unemployment payments, state housing, rent subsidies, health care and so on, the mindset is that they are entitled to a high level of services and support for free, and that it is the absolute duty of the state to provide that.

The recovery in the Irish economy means that we are now down to an unemployment rate of around six percent, less than half the 15 percent we had after the crash.  What that means is that anyone who seriously looks for a job will find one.  It may not be the kind of work they want, or where they want, and it may not pay the money they want, but there are jobs out there.

However, our very generous benefits system and the entitlement culture that persists in some low income areas means that for some people it makes more sense not to work.  And part of this mindset, frequently encountered in homes where no one has worked for years, is to resist payment for services like water or garbage collection, and to endlessly demand more in state supports and payments and claim they are living in poverty.

The reality, of course, is that nothing is "free" because the state has to find the revenue to fund everything.  This means that it is "the people who get up early in the morning" and go to work (to use new Taoiseach Leo Varadkar's phrase) who end up paying for everything through their taxes.

Varadkar has pledged to reduce this burden in marginal steps in forthcoming budgets.  He is limited in what he can do because he is dependent on the support of Fianna Fail which insists that any fiscal space (extra revenue) must be divided two-thirds to one-third between increased state spending and reduced taxes.  With an eye on the next election Fianna Fail are playing populist politics, positioning themselves left of center.

We have secured the introduction of a price regulator to ensure that price gouging will ultimately not happen @timmydooley #bincharges pic.twitter.com/XTJr1h3B7a

Before he became taoiseach and was still minister for social protection, Varadkar launched a campaign to reduce welfare fraud here.  Part of this was a decision to start publishing the names of welfare fraudsters, in the same way that the names of tax defaulters are published here.  Sinn Fein and others on the left denounced this, calling it a "hate campaign" directed at the most vulnerable in our society.

Fianna Fail then applied pressure and the result is that the proposal has been watered down and only those found to have committed welfare fraud of over €5,000 will have their names published.  This makes little sense.

One can understand, perhaps, that someone out of work might continue to claim welfare for a few weeks after finding a job, until they get themselves organized.  But this means that someone could fraudulently claim for six months and then avoid having their name published if they are caught.

This may seem like a relatively small matter in the greater set of issues facing Varadkar.  But this scaling back, as with his admission that spending increases will still be given a much higher priority than tax reductions, is an important indicator. It shows that his ability to change both the system and entitlement mindsets is severely constrained.

Just like the water controversy, the current dispute about pay by weight bin charges reveals that as a country we are still immature and irresponsible. It's not very reassuring given the economic shocks that could come our way from Brexit and the possible pullout of American multi-national companies here as Donald’s Trump's tax policies take effect.