Victims’ rights group's outraged. "When you hear in the news that somebody is jailed for life, nothing could be further from the truth." 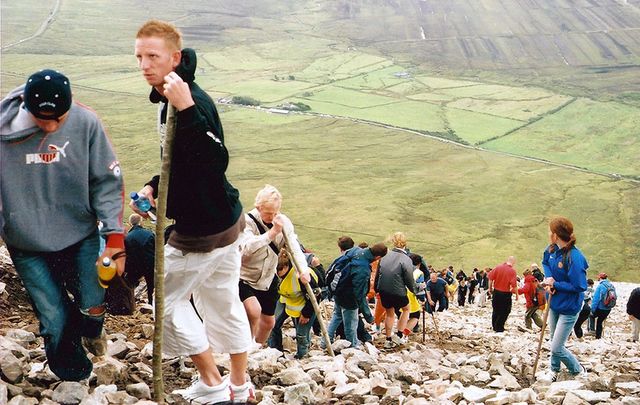 Killers and convicted drug dealers scaled Ireland’s most holy mountain, passing unsuspecting members of the public on the ascent.

Twelve prisoners from Loughan House jail in Co. Cavan included four killers and six drug-dealers in the climb a week ago of Croagh Patrick in Co. Mayo.

They passed members of the public who were oblivious that they were in the presence of some of Ireland’s most violent criminals on the way up and down the 2300-ft sacred reek.

Included in the trek, according to Sunday World photographs, was 36-year-old Richard Kearney, who battered 72-year-old Mary Dillon to death with a rake in 1998 when he was 17.

Kearney concocted a web of lies to try to throw gardai off the scent and tried to blame another man for the killing. He was sentenced to life.

Also on the hike were Mick Connors, from Ardee, Co. Louth, who beat his twin sister’s boyfriend to death with a hammer; James Keane, who blasted a close friend to death with a sawn-off shotgun following a five-day bender; and Paul Sheehan, who kicked and stamped on a man's head during a fatal attack.

All are nearing the end of their prison sentences.  They were driven by mini-bus on the 200-mile return journey between prison and mountain.

Croagh Patrick is one of Ireland's most famous tourist attractions and people trek up it regularly but once a year in July there is a giant pilgrimage, with thousands walking bare-footed, to Mass at the alter on the summit

According to legend, St Patrick fasted on the site for 40 days in 441 AD.

A victims’ rights group has hit out at the State for not taking crime seriously.

John Whelan, spokesman for SAVE (Sentencing and Victim Equality), said, “It highlights that the whole regime needs to be looked at. We need a proper change in sentencing and parole laws.

“When you hear in the news that somebody is jailed for life, nothing could be further from the truth.”