An Irishman has been jailed for nine years for the largest seizure on record of 60 guns smuggled into a British port. 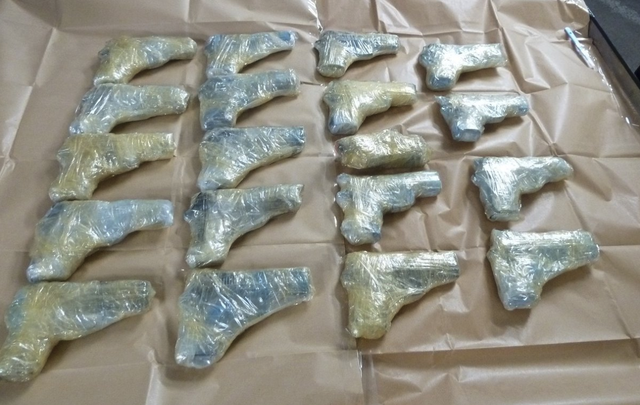 The guns seized from Robert Keogh, at Dover. AmandaNunnC5 / Twitter

An Irishman has been jailed for nine years for the largest seizure on record of 60 guns smuggled into a British port.

Conman and fraudster Robert Keogh, 37, of Clonee, County Meath, was sentenced at Canterbury Crown Court on Monday for smuggling the guns in his car into the port of Dover where he was stopped by U.K. border force officers on August 2.

The court heard the guns were found in Keogh’s Volkswagen after it traveled to Dover by ferry from Calais in France following a long journey from Turkey.

Robert Keogh, 37, from Dublin, was stopped at the Port of Dover on 2 August and the weapons, all tightly wrapped in plastic, were found stashed in his Volkswagen Passat https://t.co/vpxz1zZgC0

Britain’s National Crime Agency then unearthed another 59 firearms hidden in the bumper and both rear quarter panels, with Keogh’s phone showing evidence of him traveling to Turkey.

The prosecution told the court that Keogh, who admitted illegally importing firearms, would go on to tell police he was placed under duress after racking up a €3,000 gambling debt.

The former-business analyst, who lives with his mother, told officers criminals promised to pay €10,000 for importing the 9mm pistols and he thought he might be shot if he refused to cooperate.

Keogh’s defense lawyer said, “This man has a serious gambling addiction and substance abuse. It is clear he has made some effort to get to grips with both.

“He fell into the wrong hands while serving his latest prison sentence.”

Judge Rupert Lowe told Keogh, “If you had not been stopped, it is highly likely that numerous people would have been threatened, and some shot, and perhaps some killed, by criminals using the illegal prohibited weapons that you were knowingly driving into this country.”

Earlier this year, Keogh was due in court in Dun Laoghaire, near Dublin, on fraud-related charges when detectives said he had paid not one cent back to his victims, even though he promised to reimburse them at a previous court sitting.

A senior detective said at the time it was unlikely any of the three victims would be paid as Keogh had already been arrested for the gun smuggling in Britain and was expected to face a long sentence.

He was freed from jail for a series of offenses in Ireland in January. Less than eight months later he was busted for gun-smuggling operation in Britain.