Irish folklore would have it that the butterfly brings beautiful weather

Red Admiral's, crazy Irish weather and chatting over a pint at the Spancil Hill horse fair near Ennis. 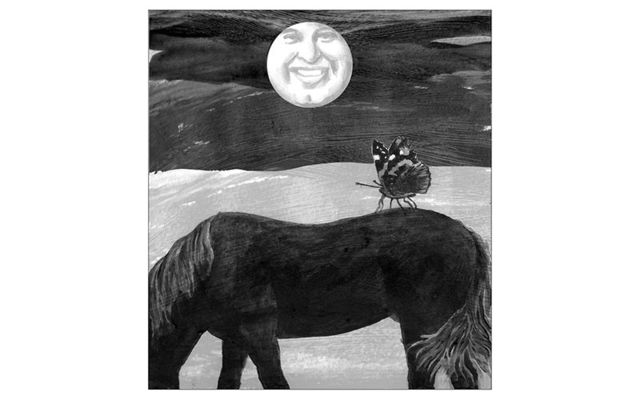 No wonder the Man in the Moon is smiling! Caty Bartholmew

Red Admiral's, crazy Irish weather and chatting over a pint at the Spancil Hill horse fair near Ennis.

The old Man in the Moon has the broadest of smiles on his ruddy face over Lough Derg tonight as I write this and as a mighty heatwave transforms and delights an Ireland unused, as many of ye know, to record temperatures over 30 degrees celsius and still rising.

Blessed indeed are the many due to start an Irish vacation during the next fortnight or thereabouts because the nation’s weather forecasters are predicting a record-breaking month and more of the finest weather there is.

It is likely to get even better than that, though, if the folklore given to me the other afternoon when I paid my ritual visit to the fabled Spancil Hill horse fair near Ennis is at all accurate.

And we all know that folklore is frequently astonishingly accurate about the many mysteries of our futures both in relation to our general fortunes and, in this case, the style and substance of our climate in an era when the world is convulsed with concerns related to global warming.

Let me share the good news given to me by a wise Sligo farmer I met on the Fairgreen at Spancil Hill. I was just wandering around the flamboyant scene of horses and those who buy and sell them when I met him quite by accident after my attention was captured by a beautiful butterfly resting on the warm haunch of a black cob.

I have only seen about six Red Admiral butterflies in my entire life and they do stop you in your tracks with the vivid scarlet patterns on their brown wings. They are also significantly larger than our other species with a wingspan of maybe three inches or so, and this one on the horse’s back in the bright sunlight was a magnificent specimen.

I watched him with something approaching awe until he flew away. and it was at this stage the Sligo farmer announced to me that the sighting of the lovely butterfly was one of the best omens for summer weather that one could wish for.

One word led to another, as they do at merry ritual events like Spancil Hill, and we wandered down together to Duggan’s famous pub on the edge of the Fairgreen and shared a pint there and his folklore. He was from Ballymote in Co. Sligo, a farmer and horse man, and he told myself and the Clare farmer at his other side at the bar that, due to the folklore his grandfather had imparted to him many years ago, the gorgeous butterfly we had seen was a portent of mighty weather prospects ahead for all.

He said it was a national fact that, due to the harsh winter behind us and maybe changing farming practices, that the butterflies of Ireland had become much scarcer this year.  However, at least along the west coast, there has been a remarkable explosion in the number of Red Admirals in the air around us, and his grandfather told him long ago that if that ever happened it was the best weather sign and signal one could wish for.

According to this folklore the change for the better will be dramatic. The heatwave outside, already breaking records, will be surpassed sharply for the rest of 2018 by a series of heatwaves which will last at least until Christmas.

The Clare farmer thought that this was likely to be negative for grass growth and stock welfare across Ireland.  Wasn’t the land parched dry already by the current heatwave, he said, and wouldn’t that surely cause huge management problems for farmers.

The Ballymote soothsayer, however, had a ready response and it was a good one. He said that the heatwaves would trigger thunderstorms with heavy rainfalls at exactly the right times to give a good soaking to the thirsty earth and stock. And then, after a few days of that weather, the next heatwaves, even hotter than the one then roasting Spancil Hill would emerge to keep the benign cycle going on and on.

The only folk negatively affected by the changed climate, said the Ballymote man, would be those traders selling raincoats and rubber wellington boots for walking on wet farms. That’s what the man said, and that is what was triggered by the sighting of that lovely Red Admiral butterfly on the horse’s back just a little earlier.

So that’s the good weather news for those of you coming here on vacation in the weeks and months ahead. It would seem important to invest in a good Panama hat in advance, especially if, like myself, you are developing a bald spot!

When I came home, finally, after a splendid day, did I not see another Red Admiral in my own back garden.

No wonder the Man in the Moon is smiling!