Who polices the areas that the police can't? What kind of justice can you actually hope to receive there? 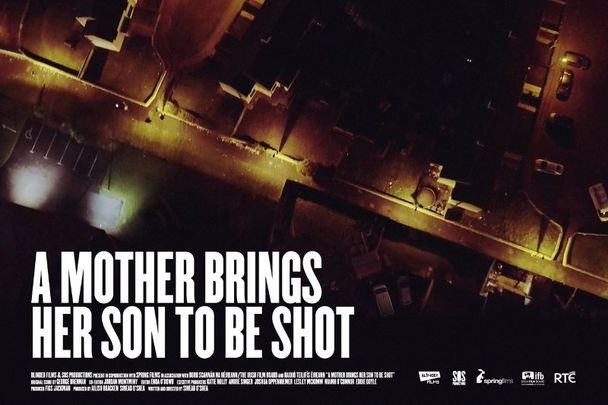 A Mother Takes Her Son To Be Shot Blinder Films

Who polices the areas that the police can't? What kind of justice can you actually hope to receive there?

In the republican stronghold of the Creggan estate in Derry police rarely show their faces, leaving some in the community to tackle law and order themselves.

A Mother Brings Her Son To Be Shot is the hard-hitting new documentary film that explores that situation.

When journalist and documentary film director Sinead O'Shea first traveled to Derry to report on a shocking story about a punishment shooting (one in which a young man's mother actually took her own son to be shot by paramilitaries) she thought she'd get the story and leave within a day.

But as it turned out, she was really at the start of a five-year journey to uncover the truth about what happens to police and justice when the forces of law and order are not around. The result of the journey is A Mother Brings Her Son To Be Shot, the new Irish documentary filmmaking waves worldwide.

“The starting point was that I traveled to Derry to report on this extraordinary situation, where a Derry mother named Majella O'Donnell brought her own son to a place where he would be shot by paramilitaries. But when I went to Derry and met the family and the people involved in this story they were just so compelling and funny and charismatic and contradictory,” O'Shea tells the Irish Voice.

“Pretty quickly I realized that we weren't just talking about the decision of one mother. It was about a whole community who were operating together to ensure that this was the situation. I realized that to take a journalistic approach and be more focused on facts and figures wouldn't really work for this story, because it had to be bigger and richer and more maybe novelistic, because the characters in the story take time to get to know and they're very complicated.”

Democracy and the rule of law are very fragile things, the film reminds us. They depend on a basic contract between the government and the governed, so when the governed reject that government (as they do in republican Derry) the law goes out the window too.

The Creggan housing estate in Derry, where the O'Donnell family at the center of live O'Shea's documentary live, is also one of the most deprived and isolated districts in the city. Police dare not go there, leaving a vacuum for others to fill.

A typical working-class Derry housing estate, it's mostly home to people who have not seen a dividend from the peace process, which has made little material difference to their lives. Unemployment rules, life can be hardscrabble, and the emotional and psychological impact of the Troubles and the legacy of poverty are a daily issue.

Young people there can become involved with anti-social activities simply for something to do. Once drugs take hold, they can become a liability to their own community.

Some would say that was the trajectory of Philly O'Donnell, the troubled teenager who is eventually escorted by Majella to a punishment shooting that is intended to send him an unmistakable message about his hard drug use.

Was O'Shea surprised by the levels of urban deprivation on the estate? “Yes, because when I was growing up in the Republic of Ireland it was much more deprived than Northern Ireland at that point. You know we looked towards Northern Ireland for better roads and you better school resources. And so the strange thing about going to places like Creggan and Rosemount for the first time was in a weird way like returning to the times of my childhood. It was so much more deprived.”

“I think it's a really important aspect of the film. You know it's so complicated up there, it's very easy to pronounce upon Majella's decision to bring her son to be shot, it's easy to make judgments about the activities of everyone is in the community. But you're talking about a place where people have very few prospects for the future.

"Unemployment is extremely high, there are a lot of mental health issues and people can feel extremely unfulfilled. Yes, the Troubles are over but they haven't really been helped find a way to more fulfillment afterward and I think that's really created a vacuum. The deprivation is a big part of that story.”

The film beings with a stunning sequence where the youngest O'Donnell boy (Kevin Barry O'Donnell), who's just 12 years old, talks on camera about all the various ways he had learned to kill people. Right away you can see his alienation, his anger management issues, and the complications in his future.

“He's so performative, he's really enjoying his moment in the film,” says O'Shea. “There was a lot of debate about starting the film with his sequence because you could argue it's a little confusing to the narrative. It's not absolutely in keeping with the structure, but I think it sets the tone for the film. You know that you've got a scene which is so layered, it is really sinister but it's also quite funny and he's very knowing about it. And yet as much as knowing about it he's also unconscious of certain things that are happening within it too.”

That A Mother Brings Her Son To Be Shot took a full five years to make is actually a great assist for the film in the end, because you begin to see what the future may hold for Philly and Kevin Barry and Majella and the entire family (much of it looks ominous).

“You're one hundred percent right. At the time I was just so frustrated with how long it was taking to complete. And yet now it's a much better film because of it. It's a really really rich portrayal, a full account of that situation on the estate. I mean it will obviously never be definitive. And I also must emphasize it's by no means a definitive portrait of Derry obviously because the wider city is in the main very different to that community. I do think the length of time it took was really helpful.”

The film is populated by some very insightful but perhaps not always entirely reliable local narrators. Hugh Brady, a one-time IRA member who now works as a community mediator, sets up a meeting to allow O'Shea's cameras to film a paramilitary night patrol. But until the moment it happens, it looks like it won't.

When it finally does the rifles that are being carried look outdated, and most telling of all a local woman whose relative has been shot dead by local paramilitaries has an anxiety attack when she looks out and sees them patrolling from her window. All of which suggest they are not a common sight, which in turn suggests it was all staged for the cameras.

That's not to say that what we are seeing isn't real, though. It's just a little bit chaotic, which may reflect the reality of the constantly shifting allegiances and the state of play in dissident politics within the wider republican family.

But there's never any doubting O'Shea's insight in the film, or the sheer richness of her deeply layered portrait of a largely forgotten community for whom the war – against poverty, isolation, social exclusion and a host of other ills – has not ended. Not even for a moment.