Irish American World War One soldiers left their marks on the battlefields including graffiti mentioning their Knights of Columbus hall, their local Ancient Order of Hibernians chapters, or their favorite baseball teams. 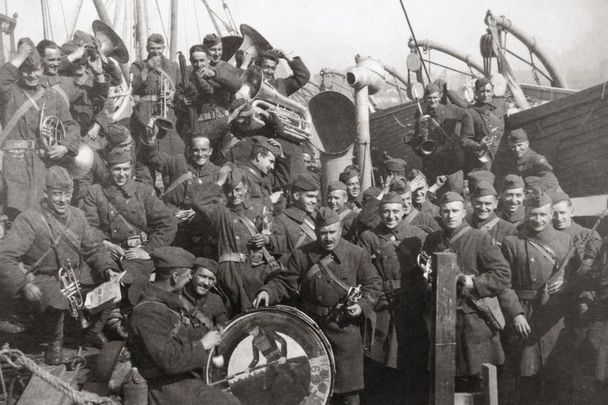 The band of the US 165th Infantry, formerly the 69th Infantry Regiment, returns from service in Europe during World War I, 1918. The regiment is based in New York and is largely made up of Irish-Americans. Getty Images

It was not a great week to pack the entire family into the minivan and head to Washington, D.C.

Oh, the monuments and museums did not disappoint.  Standouts were the stunning Library of Congress, currently running excellent exhibits on baseball and World War I.  Then there was the equally impressive Phillips Collection of art, housed intimately in a gorgeous old house, with paintings by the likes of Van Gogh, Renoir, Hopper and Sloan. And though there was one day of monsoon-like rain, the weather more or less cooperated, allowing us to see the city the only way you should see any city -- on foot. My four kids didn’t necessarily always agree. But that’s another story.

No, the problem with Washington last week was the news.  We arrived the day word came out that not one but two close associates of the current occupant of 1600 Pennsylvania Avenue have ended up on the wrong side of the law.  Naturally, the president responded with calmness, caution and dignity.

Then maverick U.S. Senator John McCain died at the age of 81.  Finally, there was the devastating report that Pope Francis, who was visiting Ireland, actually knew about the horrific accusations of sexual misconduct against Irish American Cardinal Theodore McCarrick, the former archbishop of Washington, D.C.

It was with all of this angst and misery in the air that I encountered, in the nation’s capital, a mysterious work of art.  Not a van Gogh or Renoir.

This one, in some ways, was more mesmerizing.  More fascinating.

Even though it was basically just a rock.

But 100 years ago, someone, or several people, worked real hard to carve markings into this stone.

What the heck could this be?

It turns out the marked stone is still standing today in an underground network of bunkers and trenches in northern France that were occupied by American troops in 1918, when they arrived to aid the Allies in World War I.

This stone is featured in the current National Air and Space Museum exhibit “Artist Soldiers: Artistic Expression in the Trenches.”  Many of the works are beautiful and intricate drawings of heartbreaking moments at war. Others are sculptures, vases, even lace.

And others are the result of boredom.  Messages the soldiers had no reason to believe anyone would ever see or read.  About their military units. About their lives, and the things they missed, back home.

Things like meetings at their Knights of Columbus hall, or their fellow members of the local Ancient Order of Hibernians chapters, or their favorite baseball teams.

Imagine these guys half a world away, trapped and bored in a bunker.  And they have to be Irish guys from Boston and New York, no? Wisecracking and reminiscing, all the while in the back of their minds thinking they may never see the inside of a K of C hall ever again.

“Here we have, in big bold letters, under a warm French field in total darkness, in this underground city where hundreds and hundreds of...soldiers lived and worked and found shelter for two months in 1918, this inscription: Red Socks 7, Yanks 4.  I understand it was an actual game,” comments Dr. Jeff Gusky, who photographed the underground memorials, in a C-SPAN documentary.

“We also have AOH...and K of C 298… This is the golden age of fraternalism.  So, frequently you see the inscriptions of the fraternal orders, because that’s what mattered to (the soldiers).  That’s what they cared about.”

I’m not going to pretend those were the good old days and today’s world is so corrupt.  After all, the world was at war in 1918.

But those “soldier artists” are inspiring.  They remind us that we all have things that are precious.

The big wigs in Washington, then and now, can most definitely harm our relationships with these precious things.  They can send you to an underground bunker half a world away, for one thing.

Which only makes those things more precious.