Ireland’s rain and all its perspective’s not so bad

"I met two... ladies during showers of rain in Co. Mayo years ago, and their reactions to the rain falling down on top of them were sharply contrasting." 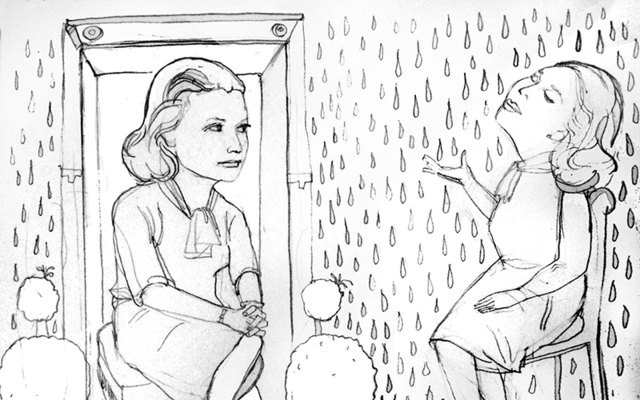 "I met two of the world's then most beautiful and best known ladies during showers of rain in Co. Mayo." Caty Bartholomew

Before I go ahead to deal with the many dimensions and perspectives attached to our Irish rain, it strikes me that I met two of the world's then most beautiful and best known ladies during showers of rain in Co. Mayo years ago, and their reactions to the rain falling down on top of them were sharply contrasting.

One of those ladies was the late Princess Grace Kelly of Monaco, and the other the elegantly charming Kathyrn Crosby, widow of Bing Crosby, the crooner who made Galway Bay world famous.

The late Princess Grace was in Mayo to visit the ancestral home from which her grandparents were torn away by enforced emigration to America like so many others. I met her by appointment in Newport, not far away from that home, in my news reporting days.

A very slight drizzle descended as we met at the hotel entrance and she instantly retreated inside to the warm, dry foyer and conducted our chat there. My recollection was that the film star was then interested in purchasing the derelict property, and I think she achieved that dream shortly before her tragic and untimely end in a traffic accident in Monaco.

The rain was much heavier, about a decade later, when I met Mrs. Crosby outside the pilgrimage village of Knock a couple of years after Bing's passing but before her second marriage.

Kathyrn Crosby, then residing in California or some nearby state in the Dust Bowl, absolutely adored the Irish rain. She gently insisted that we do our interview out in the midst of it and, as we talked, she kept her lovely head and face pointing skywards so she would get the full benefit of the raindrops.

She said that if I resided in her arid kind of climate, which burned all the moisture out of the skin, then I would love the rain too, every drop of it. It was special, she said, and some Irishman would make a fortune if he bottled it and sold it on the international market.

With my notebook sodden and disintegrating and myself soaked to the skin, was I going to disagree? Not likely at all.  I believe this special lady, now an octogenarian, is still hale and hearty so probably her argument made the best of sense.

It is raining outside now as I write.  It is probably true for most of us that we get too much rainfall most years, and tonight's rain comes driven on the teeth of a significant enough gale which required the meteorologists to issue a weather warning earlier in the day and warn folk not to visit the Cliffs of Moher because there were 100 mph gusts there.

But then it could be argued that if we had less rain we would not grow enough green grass to earn the title of the Emerald Isle or, for the rich farmlands of Tipperary and Cork regions, the fine title of the Golden Vale.

Rain and the weather generally is one of our major talking points here all our lives, as all of you who have visited know well already. We tell lies about our rain too.

"Arrah a fine soft class of a day," we are likely to remark, for example, when caught out in what is truly a downpour for the fourth or fifth consecutive day.

Those of you planning your first Irish trip -- and this autumnal season is a prime time for that, and you will certainly enjoy yourself -- should remember to pack waterproof clothing as a priority.

You might not need it at all, because September and October are often lovely dry months, sharp and crisp, but the likelihood is that a hooded waterproof anorak type of garment could almost be worth its weight in gold to you anywhere along the Wild Atlantic Way of the west coast, especially as you head further north towards Sligo and Donegal.

I would not recommend umbrellas because, very often, especially in coastal areas, the rains are driven by squalls that will turn your brolly inside out in a flash and break its ribs.

And always listen to locals' advice about how the weather is likely to develop during any given day. There is a wealth of ancient weatherlore amongst them, and that lore is garnished by tried and trusted pearls of knowledge such as, "A sunshiny shower won't last half an hour!"

This is invariably true. And there are many more of those.

September, for many of us, and indeed for many of our visitors annually, is usually a gorgeous month. The pell-mellery of the peak season gives way to a gentler pace of life and living.

I love your term for what we call autumn -- the fall -- and September brings that with torrents of leaves gently falling rather than rain, the crispness of the first frosts of the season, never too sharp or sustained, and evenings which although shorter than in summertime, are illuminated and limmed and lit by awesomely golden sunsets.

And if you are fortunate enough to be in any one of a thousand seaside pubs inside a seaward window behind a hot toddy or a pint, and somebody is singing or playing a reel in the other corner as you watch that sunset then, for sure, life is good.