Ireland is not a theme park - tourists need to get real

The Cead Mile Failte is still important but it needs to be backed up with the real thing, not the diddley-eye version of an Irish holiday. 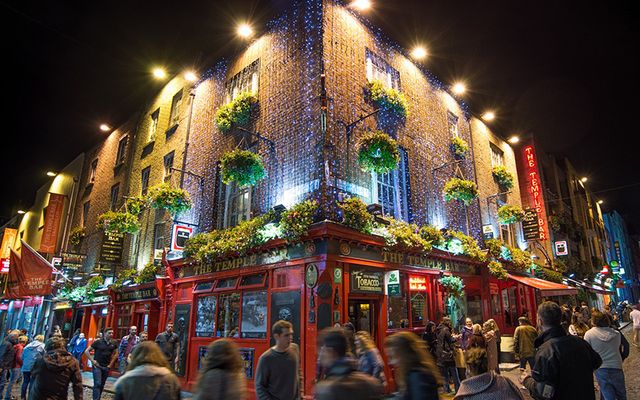 Does Dublin look more like Disney Land than a functioning capital city?

We need to talk about tourism.  Walking down Grafton Street in Dublin last week, we were accosted by a guy in a full leprechaun outfit -- silver buckled dancing shoes, green jacket, and breeches, a necklace of gold coins, red beard, red curly wig, leprechaun hat, the works.   He had clearly mistaken us for tourists.

C'mere, c'mere he insisted, waving a shillelagh with one hand while he pulled us with the other hand towards a big window frame on wheels painted to look like a portal into Darby O'Gill land.  Grinning from the other side of this window was another one of the little people who had a box of leprechaun gear.

Above the fake window was a sign saying "Turn Yourself Into a Leprechaun.”   They would dress you up in all the gear and then pose with you in the window for your once-in-a-lifetime leprechaun picture.   For a fee. Which involved real money rather than fake gold coins.

We said we were in a hurry to find the other end of the rainbow and escaped.

It's not what you expect to find in the middle of Dublin's most upmarket shopping street.   Buskers and even the occasional acrobat, yes.  But guys in leprechaun suits on the make?

It struck us that this was yet another example of the way things are going here now.  Yes, tourism is a very important business in Ireland and we will come to the figures released last week in a moment.

But so much of it here these days seems to be unnecessarily tacky, especially in the tourist hotspots in Dublin, Galway and other parts of the country.

All the main streets now have massive "Irish gift shops" with diddley-eye music and ballads pumping out of loud speakers.  And they all sell the same stuff, the leprechaun hats and shillelaghs, thatched cottage jugs, shamrock key rings, sod of turf fridge magnets, Kiss Me I'm Irish t-shirts (they're the polite ones), tweedy flat caps and Aran sweaters (most of them made in China, like the rest of the junk).   Plus all the t-shirts, sweaters and other items relating to the Irish love of the drink and what you might be willing to do after half a dozen pints, etc.

It's depressing.  Of course, tourists can still find the real Ireland if they make the effort, and they can still find quality souvenirs if they look for them.  But the junk is far more prominent and it seems to be taking over more and more.

This commercial exploitation of "the Irish experience" has now reached a worrying level here.  The Ireland it sells is about as real as what's on display in the country pavilions in Disney World.

In fact, in high summer in the center of Dublin (and it's the same in Galway and elsewhere), it often feels like tourism is turning Ireland into a Disney-style diddley-eye theme park.

And it's not just the packaged, ersatz, kitschy nature of what's on offer.  It's the huge number of tourists coming here that is a problem as well, made worse by the fact that they all seem to be funneled into the same areas.  The crowds in the main tourist streets -- in Dublin it's O'Connell Street, around College Green and up Grafton Street and Nassau Street -- are almost as bad as the crowds in Disney World.

O'Connell Street, which is supposed to be the historic center of Dublin, has become tourist bus central, with crowds of visitors being hassled by on-street sellers flogging all the bus tours that start there.  As well as all the regular tours of the city there's a ghost bus tour (Bram Stoker, etc.), several storyteller bus tours and at least four 1916 bus tours, some with actors carrying replica guns and one with the tourists packed into what looks like a WWI military vehicle.

The problem is not centered on Dublin alone

That's just a taste of what's on offer.  And if you want to go down the country there are the disgracefully named Paddywagon tours, the green mini-buses emblazoned with shamrocks and leprechauns.

At peak times in summer it often feels like all of the center of Dublin is a theme park for tourists.  Even places like Trinity College, where the Book of Kells is on display, looks more like a tourist attraction than a university when the crowds of picture takers outnumber the students in its historic Front Square.

The Temple Bar area in Dublin's old quarter is already a theme park, except that the theme here is drink and roaming around through the grubby narrow streets from one packed pub to another in search of the mythical “craic.”  Instead of finding the craic the tourists end up drinking with other tourists listening to third rate diddley-eye groups.

Nor is the over-crowding just a problem in Dublin. The best traditional musicians have abandoned the pubs in Doolin in Co. Clare, fed up with being stared at by tourists when several tour buses arrive at the same time and clog up the one street.   And out at the Cliffs of Moher, the visitor center is frequently overwhelmed in high season when half a dozen buses arrive at the same time and a few hundred tourists all want to use the few bathrooms immediately!  They now try to stagger the arrival of the buses with time slots at busy times, but bus drivers have their own schedules and are a law unto themselves.

When it is most busy the crowds in Dublin seem almost as bad as those in Barcelona or Venice, two cities that are now attempting to control tourist numbers because of angry opposition from local people who don't like what it is doing to their cities (and presumably don't work in tourism).

In Barcelona, for example, the Ramblas avenue (site of the recent terror attack) now gets so congested it's pointless walking down it unless you enjoy being surrounded by thousands of other tourists.  The famous old Boqueria food market off the Ramblas, once a fascinating place to visit, is now so jammed with tourists every day that you can't see anything and the locals no longer have space to shop -- and the tourists shuffling around in a daze don't buy anything so the stall holders hate them.  Is this the future for Dublin?

Of course, this is not just a problem in Ireland.  Tourism has become an international plague and we are all guilty of spreading it since we all want to travel and walk around gawking at the sights.  Venice, which is now unbearable in summer because of the crowds, may be slowly sinking. But long before it may vanish beneath the sea it is being engulfed by tidal waves of tourists.

The main problem in Dublin, like in Barcelona, Venice, London or Paris, is that tourists all want to see the same sights and are fed the same packaged experiences and merchandise in these areas.   There is no easy solution to the problem, although the answer clearly lies in diversification and spreading out the tourist flows and what's on offer. More Wild Atlantic Way and less Times Square.

The over-crowding problem is the other side to the success story of tourism here, one that is rarely discussed because it's seen as being unhelpfully negative.  But it's something that needs to be given some thought before the center of Dublin really does become a theme park chock-a-block with parked tourist buses.

Tourism is such an important industry, we need to get it right

We need to get it right, not least because tourism is such an important industry here, with one in nine jobs depending on it.  We certainly don't want to kill the golden goose.

The most recent figures for tourism here covering the three months to the end of July were published by the Central Statistics Office early last week.  You will probably have seen the headlines which showed that the total number of trips to Ireland from people overseas increased by 4.4 percent year-on-year in the period, despite a fall in the number coming from the U.K. (our most important market) of 3.8 percent.

This growth was made possible by more tourists coming from the rest of Europe, up over five percent, and from North America, up over 12 percent, a remarkable jump.

The decline in British tourists is worrying since they far outnumber other tourists here, and this is obviously a result of the decline in the value of the pound due to Brexit.  It's not helped either by the increasingly high prices here relative to other European destinations, for accommodation, food, and drink, getting around and just about everything else.

Since the dollar has also fallen sharply in value against the euro, it may seem surprising that tourist numbers from North America have increased so much.  But that is likely to be explained by Americans being more concerned about security (and seeing Ireland as a safe destination) than they are about it costing them more to holiday here.   Increased competition on trans-Atlantic airline routes and lower ticket prices, as a result, are also likely factors.

The Céad Míle Fáilte is still important here. But it needs to be backed up with the real thing, not the diddley-eye theme park version of an Irish holiday.

Have you been a tourist in Ireland recently? Let us know your thoughts on the experience in the comment section.