Handsome Devil director John Butler on finding his own voice

Critically acclaimed and doing brisk business at the Irish box office - this movie's like a classic 1980s teen summer comedy drama, that's made for 2017. 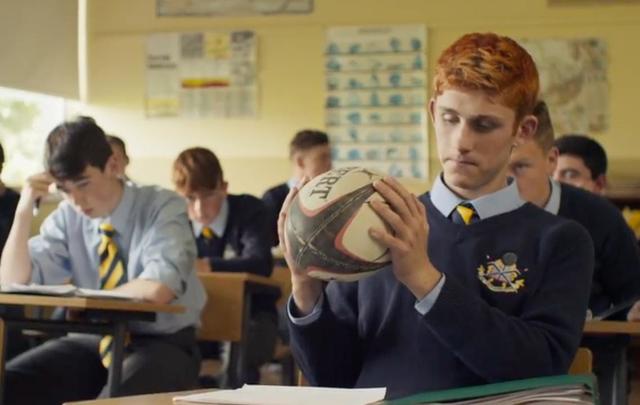 Fionn O’Shea in a scene from Handsome Devil.

Handsome Devil is the big film out of Ireland this summer. Already critically acclaimed and doing brisk business at the Irish box office, it’s like a classic teen summer comedy drama from the eighties that’s been made for 2017. CAHIR O’DOHERTY talks to director John Butler about the film and finding his own voice in his chosen career.

Remember all those classic John Hughes coming of age dramas from the eighties like The Breakfast Club, Sixteen Candles, Pretty In Pink and Ferris Bueller’s Day Off?

They were so successful that it’s hard to think of that era now without thinking of those films. So when Irish director John Butler decided to make Handsome Devil, he knew it would be an Irish version of a feel good crowd pleaser exactly in that eighties vein.

Focusing on a spirited young teen named Ned (played by gifted newcomer Fionn O’Shea) who’s trying to make his way in a world that won’t listen, the basic outline is pure Hughes. Even the title is a reference to a classic song by The Smiths.

“I wanted to make a comedy drama about two boys who think they’re different to everyone else and really aren’t,” Butler tells the Irish Voice.

“It kind of springs from my own childhood – I’m gay and I’m really into sport and for a long time I found it really hard to reconcile those two things about myself. I grew up in a place that liked to keep things very black and white, so I wanted to make a film about feeling the pressure to be back or white, to pick a side.”

When the film opens Ned is a social outcast. Mocked for his dyed red hair and his taste in music at his all boys rugby mad school, he retreats into himself and his pretty justified persecution complex.

But when he is forced to share a room with new transfer student Conor (Nicholas Galitzine) he learns that the new guy is a rugby prodigy and he expects more torment.  Instead, though, a life changing friendship takes root, upending everyone’s presumptions and setting the film in motion.

Ned and Conor soon are caught up in a tug of war over the competing destinies being offered by their inspired English teacher and their tough as nails rugby coach. And it doesn’t help that Andrew Scott and Moe Dunford, two of the most accomplished and charismatic Irish actors currently working, play them.

Butler can completely identify with Pascal, Dunford’s rugby coach character. “He is right when he says it’s stupid to be teaching the rugby team player songs to sing in a talent contest. When he’s coaching the boys he says there is no place for empathy on the sports field, it’s a war. I totally agree with that.”

But it’s also important to understand who you are and what your full potential is, and so Scott’s character Mr. Sherry is given ample time to make his points and steal scenes too.

“It was important to me to write a film where there are no villains. You’re right that I did have to come to terms with those competing characters in my real life and they all of them had good things and bad things to say you know?” Butler said.

So Butler isn’t interested in binary thinking like gay/straight, artist/athlete, old/young, and the film makes his point.

“For me the subversive point of the film is the happy ending, without giving spoilers away. For LGBT characters our stories too often have been framed with negative outcomes in films. They can be desperately sad. Stories of love that is doomed and so on.”

That’s not Handsome Devil, which seems to be set some undetermined time between the eighties and now.  And if the subversion is the happy ending, it has growing roots in reality if you think of the outcome of the marriage equality referendum a few years ago.

“It was carried and passed by young people coming home to vote,” Butler says. “It’s the idea of knowledge flowing upward too. The teachers have so much to learn from the kids in every aspect of this film, so do the parents.

“That represents the Ireland that I see and love. The journey of growing up can involve taking on stupid lessons that we have to get rid of. You become cynical about the world as you get older and more naturally conservative. But young people get it.”

That Ned is the lead in the film and not 100 percent likable is actually part of the engine of the story.

“You come around to his point of view because you understand that he’s talking from a place of woundedness, you know? He’s not a hero and there isn’t really a hero in the film. That’s a reflection of life, in that for the most part people are neither heroes nor villains. There are so many other things that constrict us as we move though life that anyway.”

The film is also about friendship and O’Shea, in a star making turn, is pitch perfect in every scene he plays. While it’s never explicitly spelled out if there’s a romantic element between Ned and Conor, it doesn't need to be. They’re mates and they’re willing to fight for it.

Speaking of fighting, what does Butler make of Ireland’s likely soon to be gay taoiseach Leo Varadkar? “I think it’s really important to have a socially conservative homosexual in the world as well, but I think his politics are hateful and I can’t believe his response to the Citizens Assembly on repealing the 8th Amendment (which amounts to a constitutional ban on abortion),” Butler says.

“I think he absolutely chickened out of that one in the most despicable way. If you grant that all homophobia is underpinned by misogyny then he should know better than anyone how important that issue is. He absolutely no hero of mine. I respected him greatly for coming out when he did. I think it’s important to have political figures who are gay and that you don’t agree with at that level, and that's who he is to me.”

As a gay Irishman who directs, will he always seek to include LGBT characters in his films?

“I’m really obsessed with that,” he says. “I really want to make a mainstream comedy drama stories and I want to write LGBT characters. I want both of those things to happen and I don’t see why they have to come into conflict with each other, you know? I’d love to make bigger films and work in the mainstream in Hollywood, but not if I’m sacrificing representations because that's how I see life. We’re like moles we get everywhere and our stories deserve to be told in the mainstream.

“I would love to see me get a $40 million film with an LGBT couple at the center of it and I think that's an ambition worth holding onto because we have come a long way but God we have so much further to come. This is such a conservative business and it always is when there’s money involved, but it’s certainly worth going for.”

Handsome Devil is the home to vote movement made manifest, Butler says. “Young people carried the marriage equality referendum in Ireland. It should give us hope for the future. You can get cynical about the world as you get you older so it’s really important to remember what they did. Just like in the John Hughes films in the eighties, it’s the adults that get confused and lack courage in Handsome Devil.”

Does he realize he’ll give hope to a new generation of young people? “If that’s the case I would be absolutely delighted. Some of the most rewarding experiences on this film have been working with transition year students in Ireland and having them tell me about their life in 2017. That’s the audience I want to reach. They’re the smartest and most self-aware. If you can get young people to like a film about young people then you’ve done something incredible.”