Guido Nasi, an Italian student paralyzed in Dublin attack in 1999, returns to Ireland to thank the Irish people for their support. 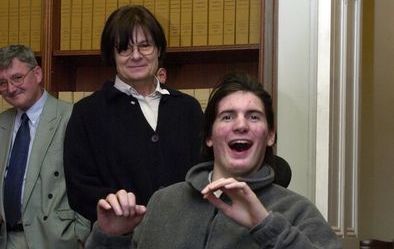 Guido Nasi the Italian student who was assaulted in August 1999 and his mother Simonetta Nasi pictured paying a return visit to Dublin during a reception in the Italian Embassy on Northumberland Street Dublin. 17/5/2001. RollingNews.ie

Guido Nasi, an Italian student paralyzed in Dublin attack in 1999, returns to Ireland to thank the Irish people for their support.

The mother of Guido Nasi, an Italian student who was left paralyzed after suffering an unprovoked attack in Dublin, has said she's fulfilled her "most cherished wish" after getting the opportunity to thank the Irish public for supporting her only child following his life-changing assault.

Simonetta Nasi, 76, was given a warm welcome when she appeared on last Friday night's Late Late Show alongside her wheelchair-bound son, his carer, and Dublin-based family friend Bernadette Kelly.

Nasi was left paralyzed, partially sighted, unable to feed himself and requiring 24/7 care when he was mindlessly struck over the head with a bottle in Dublin 20 years ago.

Read more: Did you know Irish women were once the largest female group in North American prisons?

In his speech marking the 25th Anniversary of the Irish Tourist Assistance Service, President Higgins thanked crime victim Mr. Guido Nasi for his presence, which is "an indication of the infinite power of forgiveness and courage": https://t.co/E5Ify26i55 pic.twitter.com/khi2uyBFJB

But despite the irreversible injuries inflicted on Nasi, both the Italian native and his mother have maintained a deep affection for Ireland, not least due to the solidarity and compassion they have received ever since from large numbers of the Irish public.

And in a heartfelt letter, which was written by Simonetta Nasi and read out on The Late Late Show by former victim support volunteer Kelly, the extent of the Turin native's gratitude became clear.

The frail mother, who's fighting pancreatic cancer wrote, “I am taking this opportunity as it may be the last time I have to do this because of my own illness.

"The reason you [the Irish public] are all so important is that you helped us to survive this tragedy, to accept life and to help Guido believe in his remaining capacity.

"There are no words to show our gratitude to the people of Ireland for what you have done.  Since the day of the attack, this country has shown us great solidarity in helping us.  We felt a great big hug from young and old. We will never forget the help we received.  Thank you all for everything.  It has been a pleasure knowing such a wonderful country."

Read more: How the US can provide critical support for three terminally-ill Irish brothers

Guido Nasi, an Italian man who received catastrophic brain injuries in an attack in Dublin almost 20 years ago, has been thanked by President Michael D Higgins for retaining a positive view of Ireland pic.twitter.com/qYtG3FTZRo

Speaking after the show, Kelly, a fluent Italian speaker said her friend was "extremely moved" by the warm reception she has received since arriving in the Irish capital with her son for a short visit: "Ever since Guido was attacked, Simonetta has continued to receive messages of goodwill and cards from the Irish public.  She's always wanted to come over and thank them, and she finally got the opportunity on The Late Late Show. It really meant everything to her to be able to do that."

Nasi, 36, was a guest of honor at the Guinness Storehouse last weekend, after which a party was thrown in his honor at Kelly's Dublin home. And on Monday he got to enjoy further red carpet treatment when he met President Michael D. Higgins at Áras an Uachtaráin at a special event to mark the 25th anniversary of the Irish Tourist Assistance Service.

Nasi had been a fun-loving and able-bodied 17-year-old in 1999 when he was mindlessly struck over the head with a bottle in Dublin's Fairview Park. Despite his extensive injuries, Nasi has managed to write a memoir which is expected to be released in October this year.

The book, entitled "Una Vita Spezzata," which translates as "A Shattered Life," has been supported by a leading Italian publishing company. The autobiography is expected to re-visit in detail the horrific day when Nasi was left paralyzed.