I can virtually guarantee that your intervention in a very precise way can dramatically assist your team to glory both immediately and beyond. 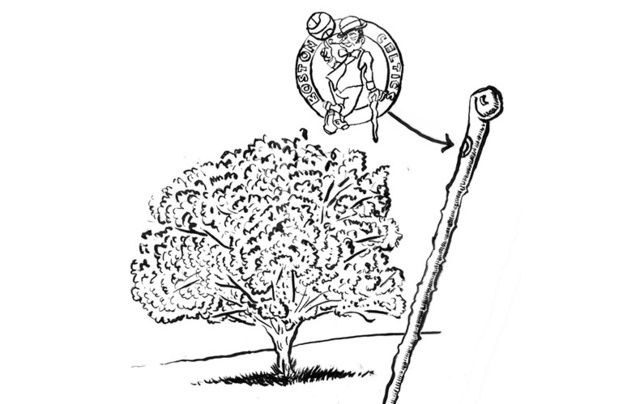 If you or any of your family and friends support the Boston Celtics team then, out of the goodness of my heart once more, I am about to bring you and your basketball giants truly sensationally good news. This is despite the reality that I know little about the game of basketball except that the code is huge over there and, given their title, it is a good bet that many of you support the Boston Celtics.

This is the crunch end of the sporting season for all codes everywhere. I'm too lazy just now to research the standing of the Celtics in their sporting battles in a discipline largely unknown to me.

However, incredible though it may seem, with the skilled assistance of my friend Declan Casey from West Clare, I can virtually guarantee that your intervention in a very precise way can dramatically assist your team to glory both immediately and beyond. That, surely, is startling stuff indeed.

Reliable sources closer to ye than me have advised me that the logo of Boston Celtics features a lively-looking leprechaun leaning on a blackthorn stick. I hope that is true because everything that follows here is based on the assumption that my information is accurate.

My sources rarely let me down so I am proceeding on this basis. And the first point I make is that the leprechaun is leaning on a blackthorn stick. These are often erroneously called shillelaghs.

But they are not.  They are always blackthorns, and blackthorns, since time immemorial, have a special and powerful standing in Celtic mythology. No little tree has wielded such force and power down our centuries, and that is a fact.

It is true in recent centuries that blackthorn sticks were too frequently used in faction fights and suchlike across this island. That day is long gone. Nowadays the blackthorn here in Ireland is more of a fashion accessory.

I have one myself, its glossy black stock crowned by the yellow curved horn of a mountain goat.  It is one of my most prized possessions and I stride through my life on good spring days bearing it proudly and with some style.

It is also a fact that many of our so-called lone fairy trees across Ireland are hardy little blackthorns.  They are protected from harm by the strongest elements of our folklore and mythology. I would rather go to jail than willingly harm any of them.

In that I am in the overwhelming majority. We have motorways here which feature roundabouts simply because there was a fairy tree on the original design route and no workman in any crew would dare to interfere with it.

The old Celtic nation believed, you see, that the blackthorn trees were the haunt of a special clan of fairies, a crabbit enough group if humans crossed them in any way. These fairies, called Moon Fairies, gave their obeisance to the moon high above and had great power in their own right. You did not trifle with them lightly.

Away before that, in the mists of Celtic times, this clan of fairies were sometimes depicted by a witch image, right across the Celtic world. She was a fearsome creature called the Cailleach.

She had an angry raven on one shoulder and a blackthorn stick resting on the other. She could wave this to create lakes and mountains and, if annoyed by humans, to lash them with storms.

Now in all of the island, to come to the point, there is only one region where the little blackthorn trees with their sharp thorns and hardy wood are occupied by a distinctly different sept or clan of fairies. That region lies close to the Ballinacally district of West Clare near Kildysart and, believe it or not, there is a district there called Paradise. And the blackthorn trees which grow in Paradise and are harvested there by Declan Casey are different to all others of the species.

They have always brought the best of good luck and fortune to those fortunate enough to lay hands on them after Declan seasons and crafts and customizes them to order in his home workshop in Ballinacally. Because of the goodwill and humanity of the local fairies, these blackthorns from Paradise are special indeed.

Declan, who was trained in the blackthorn business by his father Peter, has a legion of good stories about the benevolent power of the blackthorns from Paradise. He already exports them, and others from the wider region, all over the world to discerning customers.

Naturally there is a limited stock from Paradise, given their special qualities, but they are available still and he can customize them to order with detail including, for example, the buyer's name, the Tricolor and other specified details including, for example that logo of the Boston Celtics. And, given the track record of the fairies in Paradise to date in major Gaelic football and hurling games here at home, it is virtually guaranteed that the Boston Celtic team will win about every big game attended by fans armed with these specially powerful blackthorns.

Ye can reach Declan for details at caseysblackthorns@gmail.com and tell him Cormac sent you. And please let me know the outcome.

Read more: Cliffs of Moher, the Irish Travellers and the pub!